What does it mean to be average?

Share All sharing options for: What does it mean to be average?

Here at Beyond the Box Score, we really strive to not only provide new and insightful research, analysis, and commentary on a daily basis, but also to involve as many people as we can in good, open-minded baseball discussions. While our readers vary from those supremely versed in advanced metrics to more casual baseball fans, no one (and I mean no one) can say that they don't always have room to expand their knowledge or reevaluate existing thoughts regarding the national pastime. With that in mind, I'd like to answer a question that I receive fairly frequently -- where is a good place to start if you want to look at the game more objectively?

Well, actually, I'm going to cheat a bit because I'm going to steal an answer from someone much smarter than me. Just about a year ago, former BtBS managing editor Sky Kalkman posted a blog entry about the top-five most important saber concepts. While all five are extremely important, the final concept is one that has always stood out to me as the foundation for all analysis:

Numbers without some sort of context are utterly useless. As Kalkman said, if Player A hits .325, but the league batting average that particular year is .385, then we certainly shouldn't praise Player A despite what appears to be a well above average batting average at first glance. It's for that reason that my favorite offensive statistic is wRC+ and my top choices to evaluate pitchers include ERA- and FIP-, all metrics that adjust for league and park and then measure performance against league average. Still, even though we have use of those metrics, it's often helpful to look at what exactly that league average is that we're measuring against for reference.

While it might not seem so, the game of baseball has changed a great degree over the years. Looking strictly just at the hitters for a second, here you can see the league average wOBA (non-pitchers) for every season since 1950: 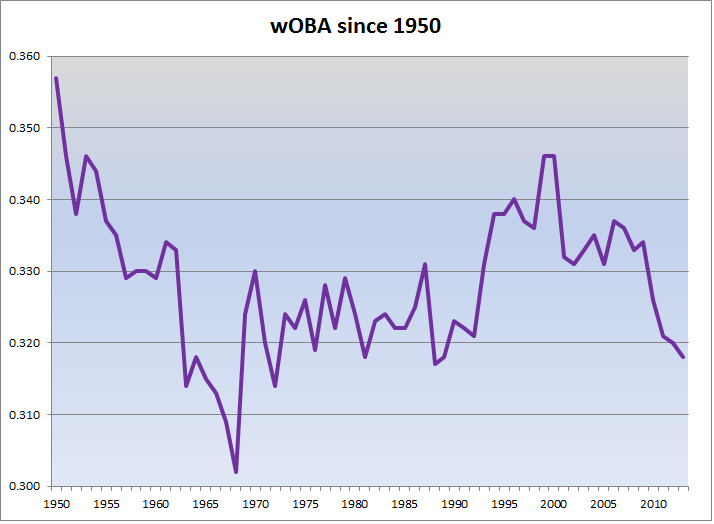 As you can see, the standard for an average offensive player has really ranged over the years. In 1950, Vern Stephens hit .295/.361/.511 with 30 home runs and 144 runs driven in, but that performance was just 11% above average because run scoring was so inflated that year. On the other hand, Hank Aaron's .287/.354/.498 line was 51% better than average in the "Year of the Pitcher" in 1968. To illustrate how offense is changing much more recently, here is a graph showing the league average wOBA over the last ten years: 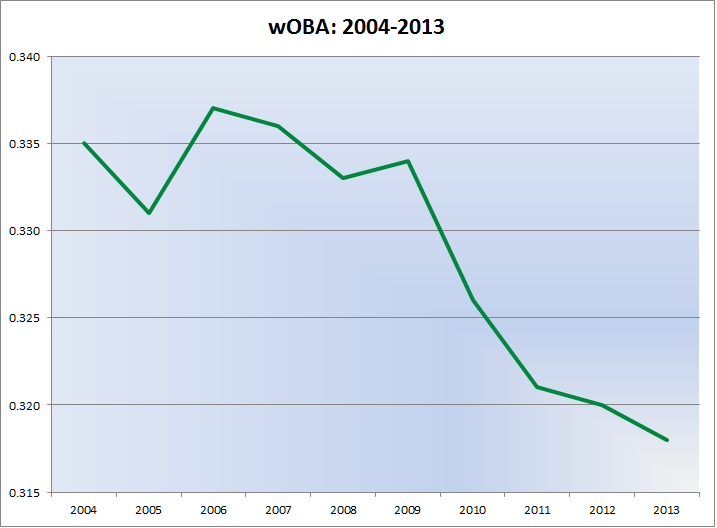 From these figures we can gather that offense is down in recent times and therefore our idea of average needs to evolve accordingly. So, when referring to average in 2013, what exactly are we talking about? To answer that question I pulled the data for all starting non-pitcher batters (to avoid the pinch-hitting penalty, a topic for another day) and found their per-game rates. I then extrapolated those numbers over the course of a full 162-game season, but you could pick any number of games that satisfies you and make the same point. For comparison's sake I did also include pinch hitters in a line below, as well as pitchers so you can see the differences with all hitters:

That stat line most closely resembles Chicago White Sox outfielder Alejandro De Aza, which probably isn't what you think of when you picture an average big league hitter, is it? Again, it just goes to show that as the game evolves we need to be able to shift our perception along with it to fully understand value. Here you can see the same data broken down by league:

One thing here that really stands out (especially for you fantasy players out there) is the drop in wOBA from the AL to the NL when you factor in pitcher hitting. Seven points is a rather significant difference and one that should also be taken into account when evaluating the pitching in each league.

Of course, as offense declines it means that run prevention is getting better in an inverse manner. Therefore, we need to adjust our baselines for quality pitching as well. To do so, we'll examine pitchers in the same way, separating the starters from the relievers to look at an estimated full-season line for each type of pitcher:

These numbers actually workout rather well to what I think perception says about average -- ERA under 4.00 for a starter is good, and ERA under 3.50 for a reliever is good -- but it does give us some more information on strikeout rates and walk rates as three true outcomes increase. Here you can see the same data by league:

Again, we see a noticeable difference in starting pitchers from the AL to the NL, though the disparity washes out when we look at relievers because pitchers aren't hitting nearly as often in the latter parts of games.

Overall there's nothing earth-shattering in the tables above, which is fine because that's not the point of looking at average. It's simply meant to be a baseline to give us context when evaluating players. It should be noted that none of the above numbers adjust for park or competition, again just to keep things simple for now. For those of you that are curious how "average" breaks out by position there is a Google doc linked below that provides all of that information. If you take nothing else away from this article, please just remember numbers without context provide little to no information about any player.