A projection of the most efficient starting lineup for the recently upgraded Seattle Mariners roster through analysis of the projected starting eight's offensive production capabilities adjusted according to potential slotting in the batting order.

In my Lineup Efficiency series, I will project clubs' most efficient starting lineups for the opening week of the upcoming season, incorporating offseason acquisitions, through analysis of offensive production capabilities adjusted by placement in the lineup, while factoring in a minimum defensive effectiveness with regard to defensive placement.

Through the past week's Winter Meetings, Seattle has been arguably the most aggressive club in scouring both the trade and free agent market for offensive talent. After signing free agent Willie Bloomquist (2 years, $5.8 million) on December 5th, Seattle was able to outbid (and likely overbid) the rest of the league for a more prominent free agent, second baseman Robinson Cano (10 years, $240 million) in a deal agreed to the following day.

The Orlando meetings saw Seattle dip further into the pocketbook in an effort to secure a semblance of protection for the lineup's new centerpiece. In another free agent signing, the club was able to reach an agreement with projected designated hitter Corey Hart (one year, $6 million), who missed the past season in Milwaukee while recovering from a January knee surgery, his second in a year. In a trade with Miami, Seattle landed outfielder/first baseman Logan Morrison, who is set to make a projected $1.7 million in arbitration this offseason (according to an MLBTR projection).

Seattle struggled offensively this past season, hitting .237/.306/.390 as a club. After scoring the fourth fewest runs in the American League and sputtering to a 25-game division deficit by year's end, it's evident that general manager Jack Zduriencik had seen enough - delving into the offseason's wealth of available bats in search of support for one of the league's quietly developing rotations, co-headlined by perpetual Cy Young candidate Felix Hernandez and potential future ace Taijuan Walker. Even if Cano, Hart, and Morrison have down years, they're still offensive upgrades over what Seattle had in 2013.

In projecting the order for the upcoming year, it's necessary to first address the requisite defensive positioning of an everyday starting eight. The infield will see only slight adjustment as Justin Smoak (1B), Brad Miller (SS) and Kyle Seager (3B) will likely remain at their respective positions. Second-year infielder Nick Franklin, who tore through the Seattle system but struggled offensively his rookie year, will lose an everyday role to make room for the two-time Gold Glove Winner, Cano, at second. 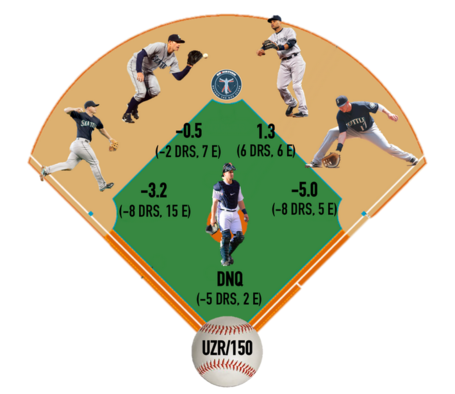 As the team is thin behind the plate, Mike Zunino will remain a starter after the club featured an astronomical seven starting catchers in 2013 (I checked twice). Although Bloomquist projects better defensively on the infield (he had a 3.1 UZR/150 at third in 2012), Seager's superior offensive projection makes it most efficient to play Bloomquist in left where he has played 101 errorless games over his twelve-year career (10.4% of games).

Because Hart's twice-repaired knees won't allow him to play every day in the field (he'll likely DH, a benefit of his transfer between leagues), and Morrison will be primary in right, Seattle remains in desperate need of a capable defensive center fielder that can bring a replacement-caliber bat to the lineup. If the club's center field deficiencies aren't adequately illustrated by their primary (20+ games started) starters' combined -28 DRS last year, a glance at their individual UZR/150s paint an even more troubling picture: -19.7 (Saunders), -21.3 (Ackley), -37.1 (Endy Chavez).

Although the club remains linked to rumors of remaining free agent outfielders (most notably Nelson Cruz) and looks poised to re-sign Franklin Gutierrez, my current roster recommendation has Bloomquist (LF), Saunders (CF), and Morrison (RF) rounding out the every day lineup with Ackley and Franklin on the bench or in another organization. Turning to the order, the reason Miller remains in the lineup, and Franklin is likely out, is due in part to his ability to handle the bat at the front end of the lineup (and the glove at short); he should lead off for Seattle.

Miller showed last year that he can provide the requisite baseline numbers for the #1 slot, and without a true speed presence with OBP ability (Seattle stole the third fewest bases last year), the club will be better suited to have Saunders, who hit .227/.296/.381 in the #1, tucked in the bottom third grouping. If he is able to replicate his .259/.379/.463 success in the #8, and inflate his club-best 13 stolen bags, he will be a productive presence in the #9 should he continue to meet a minimum OBP (above .320).

Seager thrived in the #2 last year (.304/.374/.486), and will see even better offerings this year with Bloomquist and Cano hitting behind him in the lineup. The upgraded Seattle roster allows the order to be arranged more closely based on a purely statistically-efficient model than in previous years - one built with reasoning as was laid out in The Book: Playing the Percentages in Baseball. 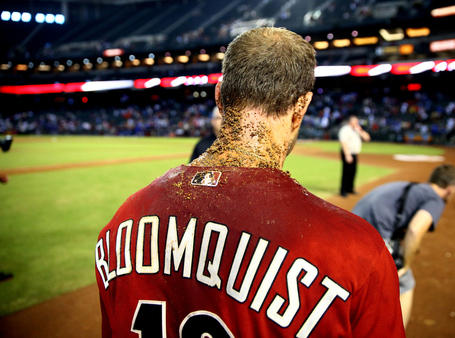 Regarding the heart of the lineup, Tom Tango, Mitchel Lichtman and Andrew Dolphin reasoned (more sophisticatedly) in essence that the #2 should draw more walks than the #4, who ideally is the most potent extra-base threat, and the #3 and #5 should be relatively equal, with the slightly better hitter slotted #5. However, because of the way the Seattle roster is structured, I believe that rather than the club's "best hitters" being spotted #1, #2 and #4 as The Book would seem to recommend, I find more value in bunching the offensive threat #3 through #6 (see: Detroit's lineup - M. Cabrera, V. Martinez, P. Fielder).

This flows from a need to protect Cano, and slotting him #4 not only allows for a veteran, low strikeout (13.5%, 2010-13) presence in Bloomquist on his front side, but provides a potential back side protection bat in Hart, who primarily hit #5 behind Ryan Braun and Aramis Ramirez during the 2012 season. With experience hitting behind a pair of MVP candidates (Braun finished 2nd, Ramirez 9th), Hart's potential in this lineup projects similarly to Victor Martinez, who after returning from knee surgery, has served primarily as a designated hitter, offering premier protection behind the big bat (M. Cabrera, D. Ortiz to a lesser extent before the knee surgery). With more consistency surrounding Cano, the less consistent, younger bats in Morrison and Smoak can support the bridge to the back end of the lineup.

Based on last year's offensive production adjusted by placement in the lineup, slotting Morrison #5 and Smoak #6 creates a potential grouping I have elsewhere labeled a "secondary power third." These clumps found in certain lineup arrangements provide a subsequent, often overlapping, power threat (good for around 50 home runs as a group) tied onto the back end of the standard #3 through #5 "meat" of the lineup. Secondary power thirds, in this case the #5 through #7, often create matchup problems late in games (two left-handed bats, can be split), and allow for furtherance of high leverage situations created when the #3 through #5 don't make outs.

In conclusion, and as previously noted, the Seattle lineup on paper appears exponentially more stable with the insertion of three or four new bats; however, the middle of the order's success remains conditioned upon the production of the first third of the order. Despite the overhauled middle third, the ability of Miller and Seager to get on base on the front end will be essential for Cano and a bunched offensive arsenal to contribute near their ceiling potential.