Is Ubaldo back or was his performance down the stretch a fleeting mirage?

The questions surrounding Ubaldo Jimenez this winter are predictable. How much should teams trust his second half as a sign of things to come going forward? Can he wind the clock back a little? They’re fair questions. After being a shell of his former self for the majority of his time in Cleveland, Jimenez put up fantastic, vintage, 2010-type numbers in the second half of 2013. Teams now have the wonderful chore of trying to discern what could have possibly taken his numbers back up to the lofty heights that they had fallen from not too long ago. It’s a multi-million, perhaps $60-$70 million, question.

The only thing about the table above that is somewhat consistent is the mediocre-ness that engulfs the middle portions of the ERA, FIP, and BB% columns. Ubaldo was actually better in the second half of 2013 than he was in 2010; a season in which he compiled 6.5 fWAR. Other than that three month stretch, he has not been a very good pitcher over the past three seasons.

Many articles have been written regarding Ubaldo’s diminishing velocity and sorely subpar command. His fastball velocity has dropped ~3 mph since 2010 and his Zone% has only topped 46% once. League average Zone% for starters in 2013 was 44.7%, so he’s right around league average in terms of throwing the ball into the strike zone. However, command and control, are two different things. Throwing strikes over the heart the plate will help someone’s Zone%, but it isn’t going to be very good for his run prevention, assuming hitters do their jobs. Jimenez hasn’t been very good at painting the corners in his career. His Edge% (percentage of pitches thrown over the edge of the strike zone) has declined every year from 2010 until now. It finally bottomed out at 13.8% in 2012, which places him squarely in the 25th percentile. Jimenez has been plagued by the long ball the past two seasons and that’s partly because he leaves way too many over the heart of the plate.

In the second half, we saw a different Ubaldo. He improved his velocity, altered his pitch mix and the way he attacked opposing batters, and got a few more whiffs while inducing a little weaker contact thanks to better location. 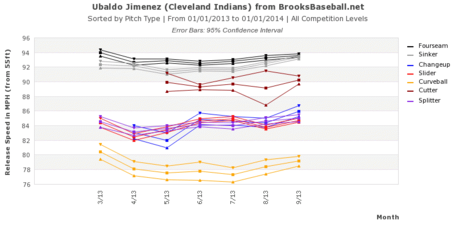 After bottoming out in June, Jimenez’s velocity pushed back over 93 on average and even climbed near 94 on average in September. It’s not an extravagant difference to many people, but it’s a large enough to make a difference to the hitters that are in the box. I looked into his release points, thanks to the wonderful Texas Leaugers database, but didn’t find much. His release points in the second half were a little more consistent and tightly clustered, which could have lead to an increase in velocity and command. Cleveland also tweaked his delivery a little in 2013, as noted by Jeff Sullivan in this FanGraphs’ piece from May. In September, we even got a little more of a glimpse into what got Ubaldo back into his groove when his pitching coach, Mickey Callaway, praised his new mechanics and work ethic. Ubaldo’s always had funky mechanics, so his release points usually varied quite a bit, but when he keeps them tightly clustered - as he did in the second half - it seems to help his velocity and command.

Mixing It Up, With Better Location

Jimenez made drastic changes to his mix during the second half of the season. He began utilizing the sinker more, no matter which side of the plate the batter greeted him from. Surprisingly, the switch to heavier sinker usage did not improve his ground ball percentage. In fact, his second half ground ball rate was lower than the first half! His plan for attacking hitters, however, was much improved in the second half, as far as getting strikeouts and weak contact were concerned. Jimenez saw his F-Strike% (first strike percentage) increase, a robust 6 percentage points, to 58.4% in 2013. If we separate out his ability to get ahead by halves then we can paint an even prettier picture. He posted an F-Strike% of 56.1% in the first half, the tenth worst among qualified starters. In the second half, he began reaping the rewards of getting ahead by posting a first strike percentage of 61.3%, good for 49th best, which is quite an improvement. All in all, his seasonal F-Strike% of 58.4% is a career high.

By throwing first pitch strikes, he gave himself more pitches to play with later in at-bats. Additionally, he did a much better job of throwing pitches that hitters could not do much with while he was ahead in the second half. 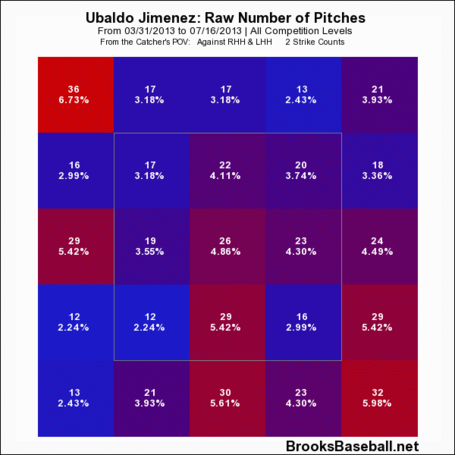 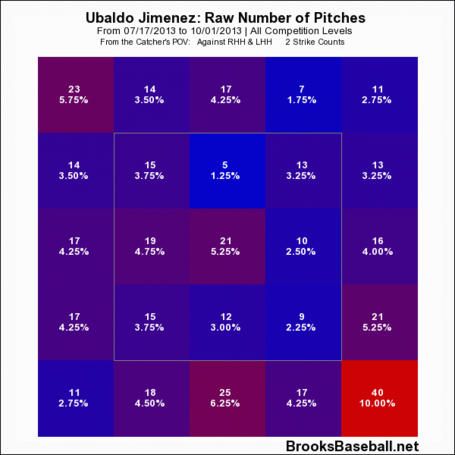 As you can see, Ubaldo threw a much lower percentage of pitches in the strike zone - over the middle specifically - when he had two strikes in the second half. If we split the data a little further to account for the opposing batter’s handedness we see that Ubaldo lived on the outer third and out of the zone, both low and away, when he was ahead in the count. It’s a simple truth, it’s easier to limit damage when you give a hitter less to work with.

His plan to get ahead and put hitters away also did wonders for his strikeout totals. In the second half, Jimenez saw his whiff rates on five out of his seven offerings improve, according to Pitch F/X data. The largest spikes came on his sinker and split-finger. It’s possible that the split-finger benefited from being used a little more scarcely. Jimenez’s improved approach combined with a little more velocity and life on all of his pitches allowed him to do fabulous things in the second half.

Are You Feeling Lucky?

I believe that Jimenez made strides towards becoming more like his old self in 2013; at least in the sense of run prevention. He’ll never be what he once was. He’ll never have the velocity or pitch mix that he had during his run with the Rockies. But he has a chance to become a well above average pitcher again if he can carry over the things that made him successful near the end of the 2013 season.

There comes a time in every pitcher’s career where they must learn to throw with less velocity than they used to have. I’m sure it’s a tough transition, and for others it may be even tougher. Jimenez’s transition might finally be complete, or at least nearing completion. I’m not sure what I would do if I was a GM. It’s hard to trust success in a small sample size when you’re also looking at 2+ years of bad data. Dan Szymborski’s ZiPS system projects Jimenez to post the following numbers in 2013: 173 innings, 25.5 K%, 9.8 BB%, 3.64 ERA and a 3.67 FIP. Those numbers coupled with a .83 HR/9 rate would give Ubaldo a 2.5 win season. I can’t argue with too much with those projections, although I was a little shocked that the projection was that high on him. I’m still somewhat skeptical of Jimenez going forward, but after diving into the pieces surrounding his mechanics and approach I’m much more enthused about him. He is a gamble, but he could easily be worth it if he’s able to continue the new found consistency in his mechanics and newly refined approach to pitch selection.

All statistics courtesy of FanGraphs, Brooks Baseball, and Texas Leaguers.