Share All sharing options for: The Baseball Mistake Index

Every spring training the same phrase is uttered by every member of every MLB coaching staff--"We're going to focus on the fundamentals." I developed a measure over the last couple of years which puts all the bad things teams can do in one place to see if there is a relationship between sound fundamentals and winning.

In my former blog I called it the Mistake Index and you can still see it in its complete version here, but I'll discuss a truncated version in this post. I'll begin with this chart for the American League: 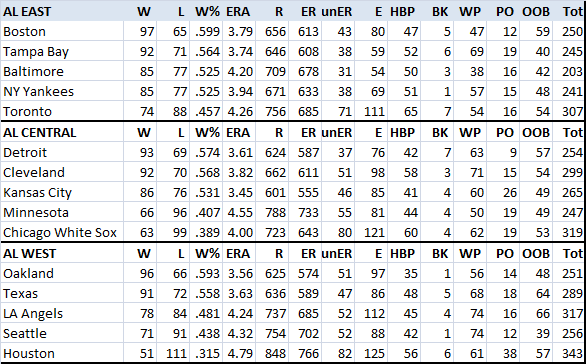 Runs and earned runs are usually shown but unearned runs are rarely shown on their own, and the relationship between errors and unearned runs is historically around 55-57% of errors become unearned runs. Hit-by-pitch, balks, wild pitches and pickoffs are common stats, and OOB is the number of times base runners are thrown out trying to advance on the bases. Team and individual data for this last stat can be seen on this Baseball-Reference page.

Why do mistakes matter? Every one is an additional base either given or advanced, and the Tom Tango Run Expectancy Matrix makes it abundantly clear that giving away bases increases the chances of a run scoring. The total column adds the columns from errors to OOB, and at least in the American League, there appears to be a discernible trend--teams that made fewer mistakes had more success. This is axiomatic in football and basketball, at least according to pre-game predictions that focus on keeping turnovers to a minimum, but less discussed in baseball.

This table shows the National League: 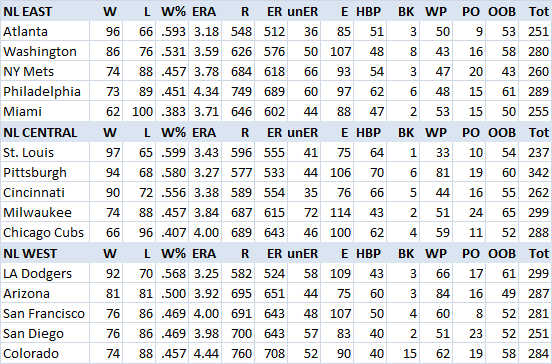 It's less clear-cut in the NL. The Dodgers and Pirates had very good seasons even though both committed over 100 errors. The Dodgers minimized pitching mistakes, no surprise with Clayton Kershaw's outstanding season when looking at numbers other than wins. The Pirates managed to overcome mistakes--they had decent pitching in 2013 but nothing spectacular. Having written this, look who led in the NL with the fewest mistakes.

No number tells the entire story of a season, but the Mistake Index adds context. I've only told half the story--with play-by-play data, it's also possible to see how well teams capitalize on opponent mistakes. There are also hustle aspects like reaching base due to an error or taking an extra base and I'll discuss these ideas in the future if there's enough interest.

The Baltimore Orioles and Winning with Defense

How far can excellent defense take the Orioles?

The Baltimore Orioles and Winning with Defense

It's one thing to look back and tally up numbers and quite another to see if they can predict the future or affect talent acquisition. Can mistakes be prevented? It's a tricky question since I doubt one of Starlin Castro's goals for 2013 was "tie for the Major League lead in shortstop errors with Alexei Ramirez." Castro's errors broke down to 2 catching, 12 fielding and 8 throwing, suggesting practice and experience can lower that number. The Cubs hope so since he's signed through 2020 for $65 million.

Four or five years ago the Mariners stated their intention of strengthening their defense and making it a cornerstone--it didn't work out. Jeff Francoeur is the best-fielding right fielder in the game, which will get him a minor league contract somewhere. It's difficult to win with defense in baseball, but there's logic in reducing controllable mistakes There is no reason to give teams bases at no cost--there were 65,841 total bases in 2013, of which around 6,000 (the errors, HBP, balks and wild pitches) were given away, almost 10%. With a run being equal to around 3.3 bases, reducing mistakes by around 33 could equal a win, and in the 5-team playoff era, every win becomes huge. It might be difficult to reduce mistakes, but it certainly behooves teams to try.