Share All sharing options for: Success rates for Double-A League prospects based on walk and strikeout rates

This is the third and final time I will look at historical walk and strikeout rates for prospects. If you followed my previous installments, much of this will look familiar to you; however, these results are more complex and different. For those who are new, the basic premise is this: how likely is it that an offensive prospect succeeds in the major leagues based only on his minor league walk and strikeout rates?

First, I compiled the minor league numbers for all Baseball America top 100 offensive prospects from 1990 to 2007. I stopped at this year to allow enough time for the player to achieve MLB success. I only include top 100 prospects to add in a form of scouting to the picture. Stats and scouting should work hand-in-hand and an analysis similar to this can help augment a scout’s evaluation of talent. Next, I compared each prospect’s walk and strikeout rate to the league average that year, creating BB+ and K+ metrics. Finally, I compared the walk and strikeout rates at various ages and levels of prospects in the minor leagues to their career MLB Fangraphs Batting runs. Batting runs are calculated using the wOBA linear weights and adjusting for park effects. Basically, how many total runs above average did the player produce on offense, after adjusting for park. 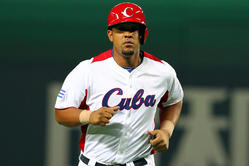 The Chicago White Sox paid a lot of money for new first baseman out of Cuba. What exactly did they get?

Here are the historical results for prospects in High A, split by BB%, K%, and age. 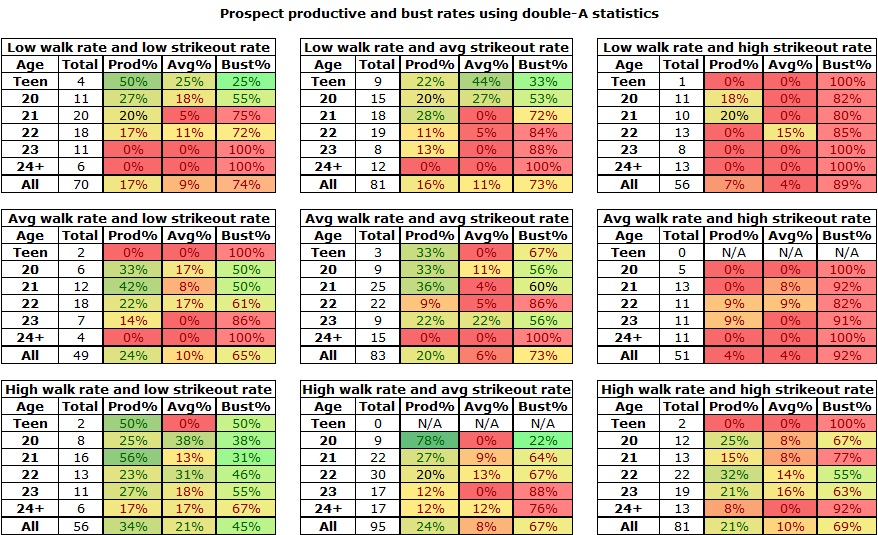 Double-A is the prospect’s first real taste of upper level baseball. It is a league of separation where a bad approach or hole can be exploited by better pitching. The best chance at becoming a productive hitter comes from a high BB/low K approach. High K hitters have much lower chances of succeeding, unless their BB rate is also high. Older players with a low walk rate are in dangerous territory as well, even if their strikeout rate isn't bad. 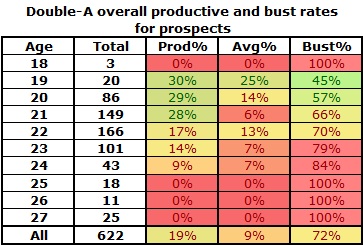 The magic age for prospects in Double-A is 21. Over 28% of prospects 21 and younger in AA became successful hitters, while only 12% of those 22 or older did so. Of those older prospects that became productive, their approach generally included either a low K rate or a high BB/ high K rate. It is interesting that an above average amount of older players in AA with a High/High approach became productive. This includes players such as Tim Salmon, Ryan Howard, Jason Bay, and Pat Burrell.

How do 2013 preseasons consensus top 190 prospects and select draft picks that played in Double-A this year stack up in this analysis?

Baez sticks out here as an elite prospect with a low projected success rate and I wrote about him in the Advanced-A post. Another player of note is Yasiel Puig. As a 22-year old in Double-A, he was a little old for a prospect in that level, meaning only a great approach would give him a high percentage of success. He almost accomplished that, with a fairly low K rate. However, it was just a smidge too high and dropped his Prod% by six. Also, he was a Cuban signing this past offseason, meaning he did not have the typical prospect career path.

Bogaerts and Polanco are two of the top prospects in baseball, and this helps show why. Not only do they have heaps of talent, but they also have great approaches to go with it. Bogaerts didn’t quite dominate in AAA like he did in AA, but he still had a great showing. He should be in the Red Sox starting lineup in 2014 and for years to come. Polanco helped himself in AA after not walking enough in Advanced-A. If he keeps that up, he’ll be in Pittsburgh by late 2014 or early 2015, depending on the Pirates’ needs.

Springer is a divisive prospect, due mainly to his huge amounts of strikeouts. Not many (if any) doubt his combination of power and speed, but just as many are skeptical he will make enough contact to do damage in the majors. This system has him pegged at right about average in terms of likelihood of boom or bust, thanks to his ability to take a walk. He spent enough time in AAA to qualify and helped himself even more there. As long as he can take a walk at well above the league average--and nothing points to his inability to do so--Springer will be able to get on base and into enough hitters' counts to become productive.

The Angels have several prospects near the top, including Lindsey, Grichuk, and Cowart. Grichuk was traded to the Cardinals in the Peter Bourjos deal, giving the Cardinals another prospect with a good approach along with Piscotty. Cowart had a down year overall, but it appears that his approach did not suffer too greatly, and that may help improve his stock next year.

Double-A is the transitional level, where prospects must turn their dreamy tools into actual performance. If a player has not learned how to take a walk by now, they probably never will and their chances of becoming a productive hitter are slim to none.

Which other players in Double-A caught your eye this year?