To spend or not to spend...on an ace

At this point in the offseason, many teams have big needs but limited resources. Often, the most common need for a team is starting pitching. But is it worth it to spend on an ace, or would signing two mid-level guys be more efficient?

Share All sharing options for: To spend or not to spend...on an ace

Earl Weaver won over 58% of the games he managed, won 100 games in a season five times (three consecutive seasons from 1969-71), and finished above .500 for 14 consecutive full seasons from 1969 to 1982. The man knew something about how to be a successful manager. The Earl related one of his theories on managing to longtime Washington Post correspondent Thomas Boswell in Boswell's book `"Why Time Begins On Opening Day"

A manager wins games in December. He tries not to lose them in July. You win pennants in the offseason when you build your team...Smart managing is dumb. The three-run homers you trade for in December will always beat brains...I don’t welcome any ‘challenge.’ I’d rather have nine guys named Robinson.

There probably isn't a single baseball fan, or sports fan in general, who isn't interested in the challenge of team building. It's probably partially to blame for why fantasy sports are so popular; it gives us the opportunity to try to be a better GM than the ones about which we always complain.

I don't think I've mentioned it here, but I'm an Orioles and Braves fan. Those two teams are linked together by one common constraint: payroll. The Braves are hamstrung by an awful local TV contract (Seriously, look at this article from a year ago. Still just as bad today), and the Orioles by Peter Angelos. Because of this constraint, team building becomes paramount, and also becomes much more interesting. 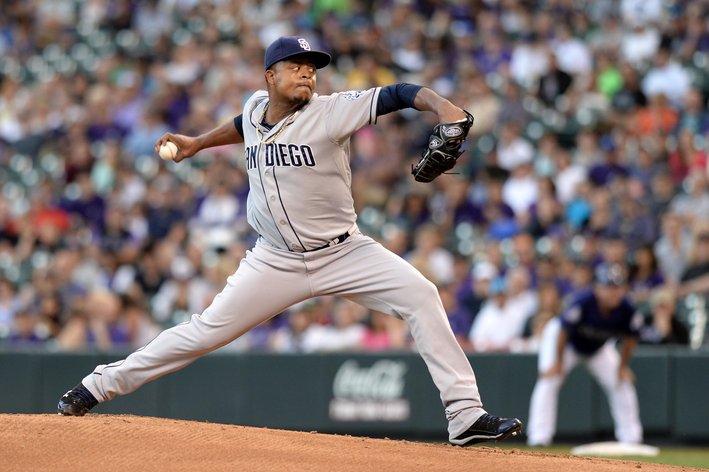 The Pirates had luck with the lottery ticket approach last year in Francisco Liriano. Can they cash in again in 2014 with Edinson Volquez?

To motivate where this is going, let's look specifically at the Orioles situation. They have a nice core of position players (Wieters, Davis, Hardy, Machado, and Jones providing a solid base), but incredibly weak pitching. Their payroll as currently constituted sits at an estimated $85 million, depending on the outcome of arbitration. There is no question that they need to improve on a rotation that ranked 24th in fWAR and 27th in ERA.

Let's say that the Orioles had decided from the start of this offseason to open up the coffers and really go for it. We'll say that they decided to raise their 2014 payroll to a maximum of $110 million (A $15 million increase over 2013). This leaves $25 million for the Orioles to spend, and we'll assume that they're spending a majority of it on pitching, specifically a couple of starters. How should they spend it?

This final route would also create the biggest media splash: pay big money for a top-flight starter and spend a little on one minor lottery pick. Say we're back in December 2012. Let's look at an example of what the three strategies could be.

Which method is the most effective? In other words, which will yield the most WAR? For simplicity's sake, we will dispose of the Lottery Tickets method and concentrate on the Two Mid-Levels and Ace-Lottery methods. In looking at this, we're going to look at this from both a theoretical and past data standpoint.

We're going to start by looking at things from a slightly more theoretical standpoint. All these thoughts go back to what a Major League team is willing to pay for a win. FanGraphs tends to calculate the cost of a win at $5 to 6 million, while Lewie Polis tends to think it's closer to $7 million. These can be viewed as the average cost per win. It can't necessarily be extrapolated out to decide how much a team is willing to pay a free agent. You can't expect a team to pay Clayton Kershaw $42 million because he's a reasonable bet to be worth 6.0 fWAR per year, any more than you'd expect Jason Marquis to pay the Padres $10.2 million because he was worth -1.6 fWAR. Now, this is an obvious fact, but it does bring up a point: There seems to be a upper and lower limit on the cost spent on a win in free agency.

Because of this, what a team would be willing to pay in free agency for a win (At least for starting pitching) isn't a purely linear relationship. Specifically, it would seem that a logistic curve could be an appropriate choice. A logistic curve is mathematically of the form

And when graphed, the logistic curve looks like the following. 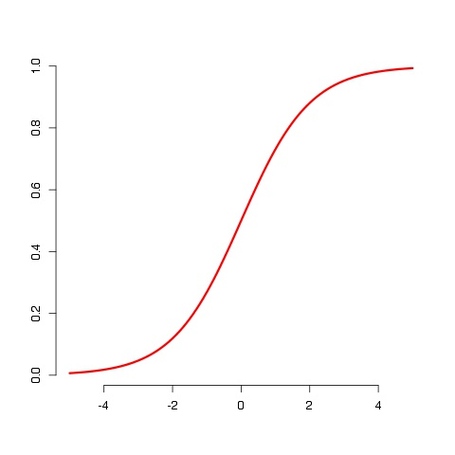 So, this could provide (as an average/expected amount) an estimate of how much a team is willing to pay in free agency for a starting pitcher. Now, it's true that in free agency, teams are paying for a mix of past (how well did the pitcher do recently) and future (how well will they do in the next few seasons) performance. Since we can't really know the team's thought on future performance of pitchers, let's briefly look at what teams pay based on fWAR for the previous year. 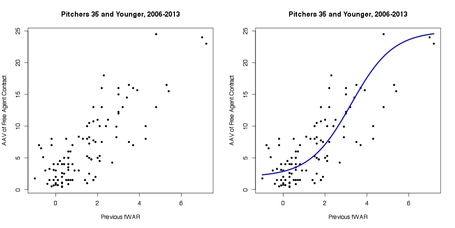 Now, just a quick explanation of what the data is. This is data from free agent pitchers who were 35 years old and younger with the contracts they signed from 2006-2013, with foreign pitchers removed. In addition, there are a couple of added points. These points are the MLB Trade Rumors estimates for unsigned major free agent pitchers this offseason. They've been pretty much spot on in their AAV estimates thus far, so I feel this is a reasonable proxy for what they will receive.

You can see a reasonable logistic curve occurring in the data, with increasing amounts of error as the previous year's fWAR increases. As this curve seems reasonable, we'll use it for the remaining portion of this section. Let's say, theoretically, that by this point a pitcher is pretty well established and that his fWAR in the immediately following season was exactly on this curve. A little unrealistic? Yes. But this is just theoretical, so go with it for a second.

Let's say that a team would spend $12 million on starters. Further, they would either spend it on two pitchers for $6 million apiece, or an $8 million and $4 million. The first method would get an expected combined 3.4 fWAR (According to the curve), and the second would get 3.1 expected fWAR. Let's expand this out to a few other salary totals.

So, unless they're able to spend big money on what is a legitimate ace, it may actually be better to go for a couple of mid-level guys than an ace and lottery ticket. In addition, if you believe in equivalent variability independent of mean, the first technique could in many cases have a higher ceiling and floor.

The obvious problem is that this is all in theory. In reality, variability isn't independent of the mean, there are injuries, players progress and regress, etc. So how do these two methods usually go in reality? 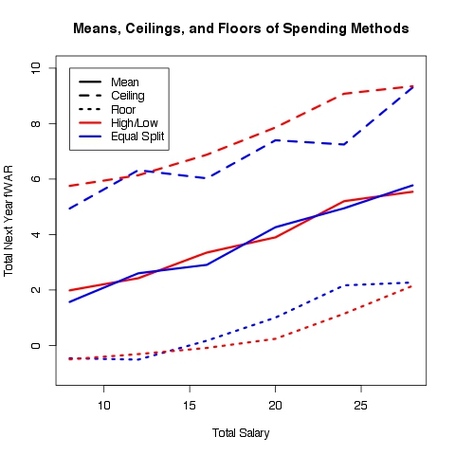 So, from what it looks like, if you're looking at average return on investment, things are pretty much a wash. There's no particular relationship that can be seen. If you're looking for the higher ceiling, generally the High/Low method returns a higher yield.

Now this just looks at the immediately following year in terms of fWAR. What about over the entire life of the contract? Do the results change? Now, this is set entirely in a vacuum. Signing a lottery ticket every year for three years may give higher return than signing a couple of mid-level guys to 3-year contracts. A team could have prospects ready in a year and just need the one-year stopgap. But we cannot necessarily factor in all these possibilities. With that in mind, we'll just look at the average fWAR per contract year. That is, we'll take the sum of fWAR for both players over the lifetime of their contracts, and divide that by total contract years. 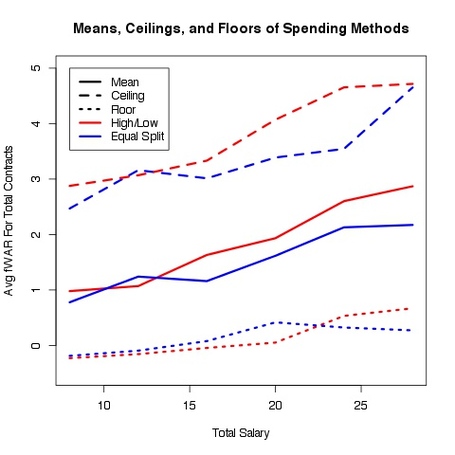 Here, the results are a bit clearer. Here, it seems that the High/Low method of spending tends to do better on average and ceiling than the Equal Splits method. However, this might not be so unexpected. After all, the aces in the High/Low method tend to be signed to longer contracts, giving them more of an opportunity to get higher fWARs and raising the average per contract year. It is entirely possible that signing mid-level guys to shorter contracts in successive years could pay off better than one ace and a series of lottery tickets, but that would probably also be much riskier.

When a team signs a top-flight starter, the boost in hope and hype for the fan base is palpable. Suddenly, there will be talk of having the ace needed to carry them into the playoffs, and maybe even to a World Series. When the team signs some middling guys, there's talk of increasing depth, but the hype is nowhere near ace level. However, at least on the average, it may not be the worst thing that could happen to a team. In fact, in the short run, it could be just as effective as signing one ace and one stopgap. That being said, there are still many who would prefer to have that ace, regardless of their complement's lottery ticket odds.