Where does Jeff Kent fall in the discussion of greatest second basemen in baseball history?

Share All sharing options for: The Jeff Kent Hall of Fame Discussion

The extremely crowded Baseball Hall of Fame (HOF) ballot is out with results to be announced on Wednesday, January 8th, 2014. It's a very crowded ballot with first-time candidates Tom Glavine, Jeff Kent, Greg Maddux, Mike Mussina and Frank Thomas, as well as holdovers like Jeff Bagwell, Craig Biggio, Barry Bonds, Roger Clemens, Edgar Martinez, Mark McGwire, Jack Morris, Rafael Palmeiro, Mike Piazza and Sammy Sosa. This post will focus on Jeff Kent and where he ranks among the best second basemen of all time.

Any HOF discussion is wide-ranging and it's useful to set guidelines. I'll be comparing Kent to:

1. Second basemen only. Measuring Kent with players at other positions ("That Jeff Kent was no Mickey Mantle!") sets up unreasonable and unattainable comparisons. Up-the-middle position fielding is important, so much that some sacrifice in offense is acceptable. This needs to be taken into consideration, so I limit my comparisons to other second basemen.

2. I measure a player against his contemporaries. Comparisons to Nap Lajoie, Eddie Collins or Rogers Hornsby are essentially meaningless -- the way the game has changed is astounding. There are metrics at Baseball-Reference (B-R) and FanGraphs (FG) which allow us to make these type of cross-generation calculations, and I do make use of them. I'm just far more interested in how players compare to their contemporaries.

This B-R link shows the entire 2014 HOF ballot, and I recommend viewing it frequently. So many numbers, how does one winnow them down? I use two values Bill James introduced in his 1995 book "Whatever Happened to the Hall of Fame?" (originally titled "The Politics of Glory"), the HOF Monitor and HOF Standards, which can be broadly defined as:

HOF Monitor -- How many outstanding seasons did the player have measured by hits, extra-base hits, home runs, runs scored, etc.? There are a total of 19 measures, some of which measure career milestones, awards and postseason appearances. The typical HOFer scores at least 100 on this scale.

The typical HOFer has a long, productive career punctuated with a five-to-seven year run of dominance. The Standards measure the career, the Monitor peak seasons, so plotting them on one graph aids in evaluating and comparing players. I did a similar analysis in a piece on FanGraphs about a month ago for pitchers, and I'll cover first basemen at my other gig as a blogger for WSCR, Chicago's top-rated sports radio station. This charts plots all second basemen from around 1960 on to show where Kent fits using these two measures: 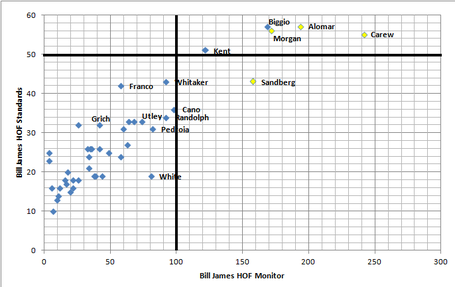 Clicking on the image enlarges it.

Yellow points are HOF inductees. The upper right quadrant is where players exceed both Monitor and Standards thresholds. The test of any metric is if results line up with expectations, and in this case, they do very well, since Joe Morgan, Rod Carew and Roberto Alomar are considered the best second basemen of the past 50 years or so. Do players absolutely have to be in the upper right quadrant? Of course not, but generally speaking, that's where the best players will be found.

... players like Jeff Kent. He had as many seasons of peak production as any second baseman of recent vintage. There are shortcomings in this analysis -- none of the measures account for the stadiums in which he played, the increased offense or the two expansions that briefly diluted Major League pitching. Having written this, do any of these factors change the discussion that much?

Kent's biggest enemy is a ballot brimming with worthy candidates. By rule a HOF voter (see a Wikipedia list here) can vote for up to 10 players but I'd be very interested to know how many do. The notion has become entrenched that only two or three players a year should be enshrined (if that), completely disregarding that baseball has expanded from 16 to 30 teams in the past 50 years. This has widened the talent pool so that the absolute best players in the world are on major league rosters, generally speaking. So how does one deal with this, plus the conundrum over what to do with players suspected of PED use? My answer is simple:

I'm over it. Move on, induct just about everyone listed at the top of this post, and save the 2050 Veterans Committee the hassle.

It's going to be quite some time before this issue works itself out. Upcoming candidates include:

I'll finish with some advanced metrics. These links show how Kent ranks in career rWAR and fWAR -- in both cases, pay less attention to the actual WAR number than Kent's rank, which is the most important thing. I expanded the pool to include every second basemen since the National Association was organized in 1871, and Kent's rank is essentially the same: 16th-best by rWAR, 17th-best by fWAR. Anytime a player is in the top 20 all-time at a position, chances are he's a Hall of Famer. Since these WAR metrics correct for parks and eras, it facilitates meaningful cross-generational comparisons.

Sort the FG table by Weighted Runs Created Plus (wRC+), a Tom Tango creation I suspect I'll read more about in my recently-purchased copy of "The Book" (great for Christmas giving!). wRC+ boils everything down to one very simple notion -- it matters far less how a run is scored rather than that it was scored. By wRC+, Kent ranks 20th, and FG suggests anything above 120 is "excellent."

Taking all of this together -- the HOF Monitor and Standards, career WAR and wRC+, it's obvious to me Jeff Kent belongs in the Hall of Fame. We'll see how many years it will take the BBWAA to reach the same conclusion.