Carlos Santana and a move to third base

Carlos Santana is making an effort to try out his glove at third base, and the Indians are in a unique position to take advantage of him at the hot corner.

Share All sharing options for: Carlos Santana and a move to third base

Earlier this week, I looked briefly into the changes that have been taking place affecting third base defense, league-wide. Today, I'd like to look at how particular teams may benefit from placing inferior defenders at third base -- particularly the curious case of Carlos Santana and the Indians.

As you might have heard, Carlos Santana has been trying out his glove at third base recently. Whether this is something that will become an in-season position switch, a permanent move, or something more like a pipe dream is up in the air right now. But personally, I'm much more of an advocate in slowing the move down the positional spectrum for catchers. There's a big difference in value when moving from catcher to third base, as opposed to a move from catcher to first.

The Power of the Positional Adjustment

The traditional position adjustment for a catcher is +12.5 runs per 162 games, due to the extreme value provided defensively. First base, the least-critical defensive position, offers a -12.5 run adjustment per 162 games. So, theoretically, a player who provides average defense at both positions and plays every game sees a run adjustment of -25 runs, or -2.5 wins, over the span of a full season. That's a huge, huge gap.

Third base carries a positional adjustment of +2.5 runs, meaning that a player who moves from catcher to third only sees a value drop of about 10 runs, or one win, instead of that massive drop from moving from catcher to first. The team gets a great deal more value out of the player ... provided that player is able to provide roughly the same caliber of defense at both positions.

Now, Santana can hardly be expected to log 162 games at any position -- much less catcher, a role that requires plenty of days off. The difference in runs / wins is going to be less than whatever the adjustment for a full season would have been otherwise ... but nevertheless, if Carlos Santana were to move full-time to one position or the other, the potential to add the most value to his team would be found at third, not first.

Now, there's a major mitigating factor here: the issue of Santana's ability to defend third base at a reasonable level.

Which MLB players had the most positional flexibility and utility in 2013? Find out the numbers with this year's McEwing Scores.

There's a massive difference between playing center field and a corner outfield position, and positional adjustment numbers account for that. Here's a primer on how they work, featuring data from FanGraphs's new spray charts.

How bad could it be? Well, over the last seven years, the absolute worst season by the UZR measurement for a qualified third baseman came in 2007, when Ryan Braun was a toilet fire at the hot corner. Braun was worth a record negative -26.9 runs on defense thanks to how awful he was over a hair under 1,000 innings at the position. But at the same time, only eight qualified players have been worth a defensive adjustment of -10 or greater runs at third base over the last seven years. Miguel Cabrera, a noted bad defender at third, hit this benchmark in 2013, but not in 2012, when he was only -7.5 runs in the hole at third.

The second-worst season at third base was in 2011, when A GUY THE INDIANS RAN OUT AT THIRD FOR A QUARTER OF 2013 -- Mark Reynolds -- played a full season there for the Orioles. Obviously, the Indians have some tolerance for terrible glovework at third, and I'd see Reynolds-in-2011 as the absolute low-water mark for Santana to hit. In addition, if Santana is only used at third against lefties, he won't see 1,000 innings at third. He'll likely see something closer to 600. That's not the end of the world, especially when you're making such a huge upgrade at the dish.

Best of all, there's a chance that the Indians are uniquely suited to live with bad defense on the left side of the infield. 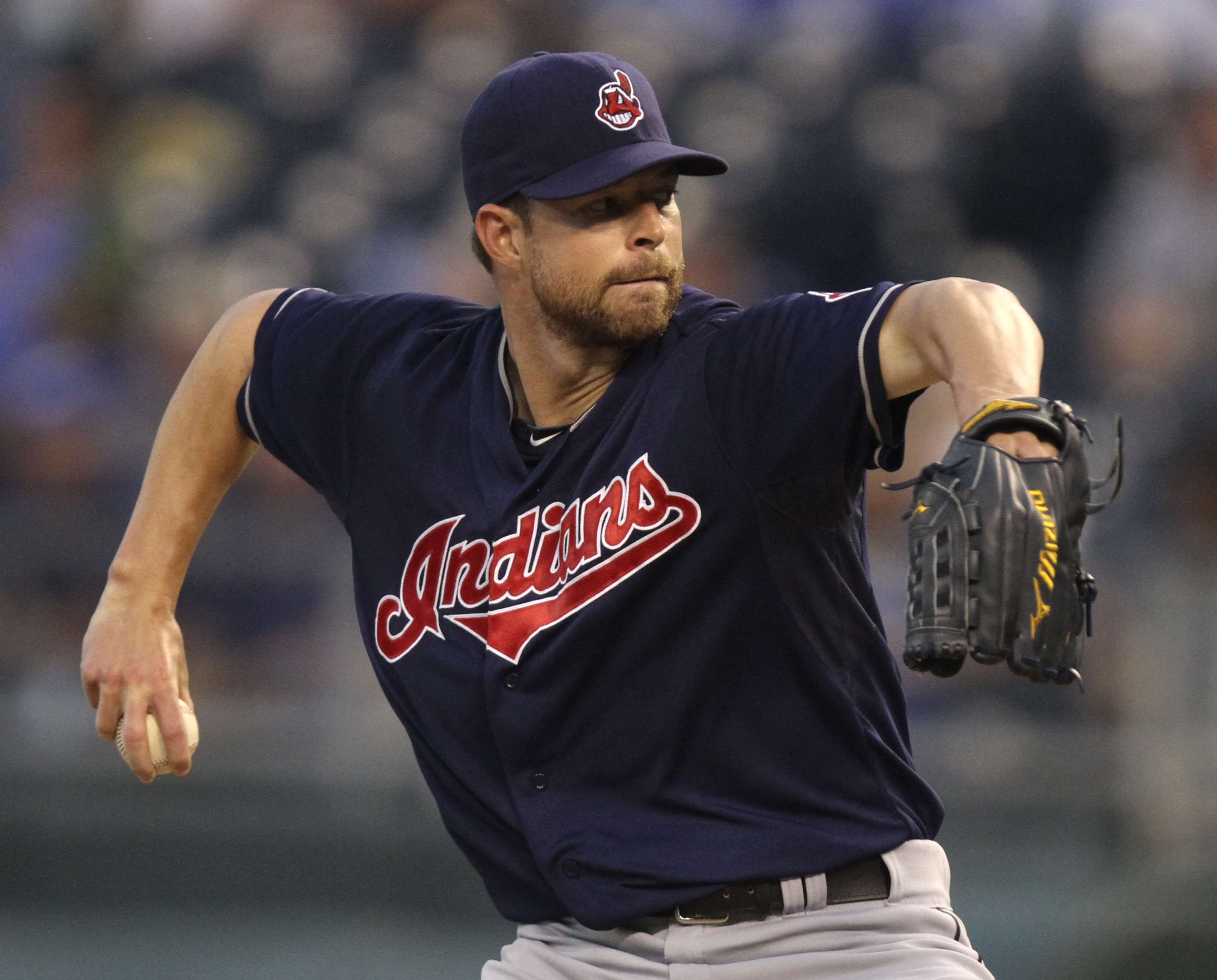 The Pitching Staff's Effect on Third Base Defense

In 2013, the Cleveland Indians were actually the team that saw the third-fewest right-handed hitters, probably due to the fact that they didn't offer too many left-handed pitchers. In fact, as best as I could tell, the team only threw 262 innings by a left-handed pitcher (most of those by Scott Kazmir) out of the 1441 and one-third innings that the team tossed.

As a result of so many righties in the rotation, the Indians only saw 50% of the opposing team's hitters bat from the right side. That's substantially less than the league average, which runs closer to 56%. Since right-handed hitters are more likely to hit balls to the left side of the infield, this leads to fewer chances for third basemen for Cleveland. It's easier to hide a player's defensive deficiencies at third base with a right-hander-heavy staff.

If the season started tomorrow, I'd project the Indians' rotation to consist of Justin Masterson, Corey Kluber, Danny Salazar, Zach McAllister, and either Carlos Carrasco or Trevor Bauer. All six of those names have something important in common -- they all throw right-handed. The Indians are designed, perhaps more than any other team save the Tigers, to avoid right-handed hitters.

In addition, though Justin Masterson is a ground-ball machine, this isn't a team that should allow far more grounders than your average pitching staff. In 2013, Cleveland saw a ground-balls-in-play percentage of 30%, which is actually about two percentage points lower than league average (32%). In fact, the total number of balls in play for Cleveland (71%) was a full four percentage points lower than league average (75%). Some of this might be attributed to dumb luck, but it also reflects another situation in which Cleveland's defense -- especially at the five -- can be less important than it might be for the average team.

If any team in baseball can live with having a poor defensive third baseman, it's probably the Indians. They proved it during the past season, in which they ran out Lonnie Chisenhall (about average defensively), Mike Aviles (probably a bit below-average, defensively) and Mark Reynolds (bad, terrible, and no good defensively). The worst part? Aviles and Reynolds aren't even that great of hitters. Carlos Santana is. 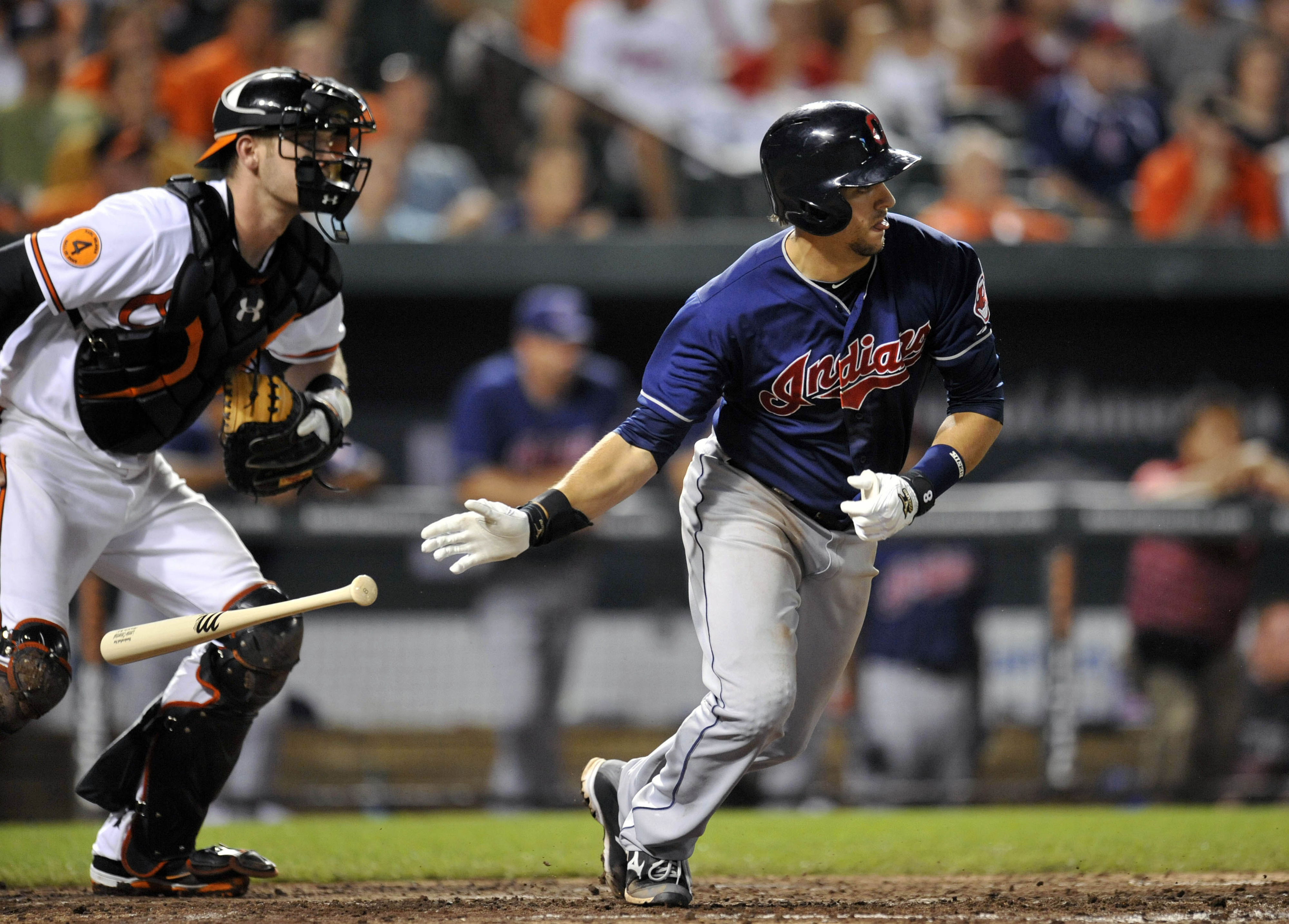 Lonnie Chisenhall and the Platoon

The last thing I'll offer is the existing situation in Cleveland at the hot corner. As of today, it's pretty likely that third base would be a platoon between Lonnie Chisenhall and Mike Aviles. Chisenhall could be a solid young hitter, but unfortunately has shown less than no ability to hit left-handed pitching. While the sample size is small, as the team has protected him against lefties, Chisenhall has hit approximately 34% worse than league average (wRC+ of 66) against left-handed pitchers over his career.

Replacing Aviles with Santana on the soft side of a third base platoon would be a huge win for the Indians, especially if it's a case of moving Santana from first base or designated hitter to third. Positional flexibility, such as the potential for Santana to play third, first, and catcher at times, allows for a chaining of players that enables the Indians -- who figure to rely heavily on platoons with players like David Murphy and Chisenhall in the fold -- to have a better chance to field a good lineup regularly.

The last point I'll make here comes from Timothy Chen and Douglas Fearing's presentation from the Sloan Sports Analytics Conference from last year. These two researchers made the case for positional flexibility as a way to take advantage of platoons and to mitigate risk stemming from a major injury. The data is a bit dense, but there's some evidence here that supports the idea that a team can certainly benefit from having more flexibility in roster construction -- especially if such a move takes Santana out of the 1B or DH position and allows for replacement with a more competent offensive player.

If Carlos Santana isn't going to be the everyday catcher for the Indians this year, the best thing for the team to do is at least try him out at third base, and make sure he isn't going to be completely unusable there. A team like the Indians was about one win away from the playoffs last season, and moving Santana to third -- even if it's just against left-handed pitching -- might grab his team an extra win over the course of the season. That's something that may be incredibly valuable to an Indians team with designs on the playoffs for 2014. Let Carlos play third.