Going into the season, Roberto Hernandez was a buy-low darling of the sabermetric community. Surprisingly, he's heading to one of the least saber-friendly organizations in the league.

Making sense of Roberto Hernandez (formerly know as Fausto Carmona) is difficult. He's spent six seasons as a big league starter and one as a reliever, while also missing most of the 2012 season. In two of his seven seasons, he was an above average starter. In four of his seven seasons, he never cracked 1.0 fWAR. He issued tons of walks early in his career, but also had an otherworldly ground ball rate. The walks have come down, the strikeouts have gone up, and homeruns are now his new problem. The Phillies, it seems, are betting on xFIP. Which doesn't sound at all like the Phillies.

There are two important questions to answer about Hernandez, so let's consider them in turn. First, we have to ask ourselves if his strikeout and walk trend will continue going forward. There's some reason to think that it will, given that he traded some sinkers for changeups in 2013. That's not necessarily a guarantee, but you're more likely to believe in a statistical change if there's a change in approach standing behind it. His changeup has always induced more swings and misses than his sinker, so if he's throwing it more often, you'd expect to see an uptick in strikeouts. Given that the walk trend is a little better established, that's probably easier to believe in without squinting too hard. 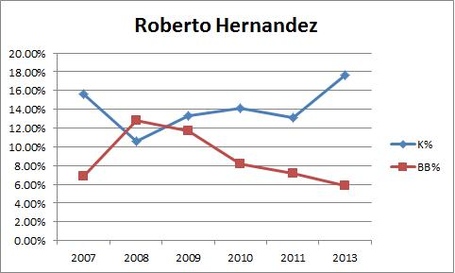 Combining a change in usage patterns and a longer trend of better command, the strikeout and walk numbers are a reasonable approximation. Maybe he doesn't do quite as well in 2014, but he's also heading to the National League for the first time so he'll face the pitcher and a crop of hitters less familiar with his game.

The other question is the homerun rate, which is really at the heart of this question. Hernandez allowed 1.43 HR/9 and a HR/FB% of 20.9% in 2013 while pitching in a pretty nice park for pitchers in Tampa Bay. His career rate is a bit above average at 12.5%, but it's nowhere near 20%. Certainly there's reason to believe that he'll regress back toward the mean. Although that's before we consider the new ballpark, which is much more homer friendly.

What is encouraging, however, is that the homer issue occur against both the sinker and the changeup in similar ways. This isn't a question of his changeup being especially homerun prone, meaning that using it more shouldn't change the calculus of the projection. He might give up some homeruns, but there's very little chance that he gives up one for every five fly balls like he did this past season.

What's interesting is that Steamer thinks he can limit the damage and Oliver thinks he won't. Keep in mind these are numbers from before the signing, so they are subject to change as they make new ballpark and playing time assumptions.

There's obviously a wide variance in Hernandez's possible outcomes, but the Phillies have him for $4.5 million on a one year deal that could inflate to $6 million as he hits certain inning thresholds. They have Lee and Hamels at the front of their rotation, but need to fill the back end with quality innings if they have any chance of contending. In addition, the Phillies have a lot of money tied up in a few players and needed to upgrade their team in a cost effective way. If Hernandez can bring a couple of wins back for $6 million, that's a huge asset. And he could be a nice trade asset if the Phillies are not able to contend.

The Phillies haven't been known to evaluate players using measures like xFIP or Steamer projections, but their decision making process led them to Hernandez, who seems like a perfectly good buy low option. Perhaps the Phillies looked at his 19 win season from 2007 and got excited about his will to win, but it's also possible they were simply looking for cheap innings and Hernandez seemed like a veteran they could rely on to stay healthy.

It's not entirely clear what Hernandez is going to be going forward, nor is it clear why the Phillies were the team that wanted him most. Either way, the marriage makes sense as Hernandez will get a modest raise and the Phillies will have a pitcher with some interesting upside for the 2014 season.