Positional adjustments are one of the least understood components of modern baseball analysis. Here's a look at the logic behind them.

Defensive metrics are usually the first target for anyone wishing to undermine Wins Above Replacement or sabermetrics. Some of their concerns are warranted in that the reliability of the defensive stats is lower than the reliability of our offensive numbers across similar sample sizes. We're still working on defense, so that's a totally fair criticism. However, one of the more interest questions surrounding our measures of defense relates to positional adjustments. These are the extra runs added or taken away from a player's total, essentially, based on the difficulty of the position.

There are two separate points of inquiry about positional adjustments. The first is an idea raised by Dave Cameron, one that I'm sympathetic to, that essentially reminds teams not to ignore defense on the corners. Generally, we think of shortstops, second basemen, and center fielders as defensive heavy spots, but having a really good defensive left fielder is pretty valuable, considering that they're still getting about 30% of the fly balls hit to them. I won't argue this point, because this is really an argument about how teams should interpret positional value. The other positional adjustment question is the one I'll take up.

During the 2013 season, Jon Heyman, who wrote more about WAR than military scholars this summer, said on numerous occasions on television, in writing, and once to directly to my Twitter account that he thinks WAR overvalues center field defense. He used this point to argue that Carlos Gomez was not significantly better than Carlos Beltran and to argue that Mike Trout was not better than Miguel Cabrera. His argument boils down to the idea that our positional adjustment for centerfielders, relative to the other outfield spots, is too generous. Is he right?

Let's first start by looking at the positional adjustments themselves (the following data are the FanGraphs versions):

These adjustments, communicated in run values, are per 600 plate appearances. This means that if a catcher and first baseman have identical offensive numbers, play the same number of games, and both play the same caliber of defense relative to their positional peers, the catcher would be worth 25 extra runs (or 2.5 wins) due to the difficulty of his position.

So the question is really if centerfielders should get an extra ten runs per season based on the difficulty of their position? That's Heyman's complaint. I won't argue for precise values because I'm not privy to enough of the inside calculations relating to the adjustments, but I am fascinated by the concept. Let's not get caught up in precisely how many extra runs a centerfield should be worth, let's just look at some data about outfield defense and see if this adjustment seems about right.

First, I'd like to make use of Revised Zone Rating, a defensive statistic that measures the number of balls hit into a player's defensive zone and how often they turn those balls into outs. A ball is defined as being in a player's zone if the average fielder at that position turns the ball hit to that location into an out 50% of the time or more. Also included separately is a number called "out of zone" which counts the number of balls turned into outs that were outside of the player's zone as defined above.

So when looking at this data remember that the zones are being defined by the average player at that position and if they would be able to turn the given ball into an out more than half the time. This means that the raw percentages can be a touch misleading. Let's take a look at the three outfield positions from 2013, and then I'll dig deeper.

First, we can see a few things. Centerfielders either have a ridiculous number of balls hit to them or the average centerfielder has much more range than they average left fielder because there are many more balls hit to their zone than either of the other two. Additionally, of the balls hit to each zone, centerfielders convert more of them into outs. This is evidence that centerfielders are more important, better, or both. But this data is a touch misleading because we need to factor in the out of zone plays so as not to let our definition of zones mess with our interpretation.

What he have here are the plays made on balls in the zone, plays made on balls out of the zone, those two numbers added together, and then each position's share of the total. In other words, of the outs made by outfielders, about 40% are made by centerfielders and about 30% are made by each of the other two. More balls are hit to centerfielders' zones, they make more plays in the zone, and they make more plays out of zone as well.

Let's explore this visually, thanks to the brand new FanGraphs Spray Charts. Below, I've pulled the last two years of data for BJ Upton and Matt Holliday, who are considered to have average range by UZR. In other words, this is a player at each position that UZR considers to get to the typical number of balls at their position. 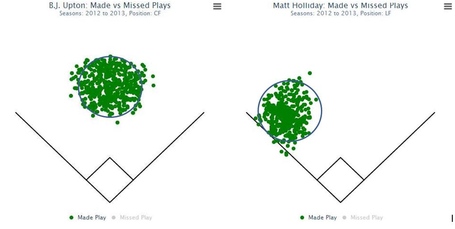 I've taken the liberty of drawing two circles of identical size around each player. What you're looking at is all of the plays made by each over the last two seasons. You'll notice that not only does Upton's circle have less white space, but there are also more batted balls in general. He covers more ground and fields more balls. I don't mean to hold up these two players as examples of great defense, I simply mean to show that the average centerfield can contribute more to his team than the average left fielder -- which is the basis of the position adjustment.

Cameron is right that good defense in a corner is valuable, but the same performance relative to average at the position in center is more valuable. Is it exactly ten runs? I don't know, but that number is perfectly plausible given the numbers and pictures we've seen.

Even if the positional adjustments are a little too big, they're only making a difference at the margins, and we know that there should be some adjustment made. The difference between these two players isn't a matter of overrating centerfield defense, it's a matter of Gomez being much better than the average CF and Beltran being much worse than the average RF. Maybe our estimates of those difference aren't perfect, but it's not because we're overrating defense at one specific position.