Chris Tillman caught a little bit of flack last year around the All-Star break from many people - myself included. Well, to be fair, most of the flack was directed at Jim Leyland because he openly admitted that Tillman made the All-Star team essentially only because he had 11 wins, which was good for 4th in the AL. Somehow, after that July night, we didn't hear much about Mr. Tillman anymore. That's strange to me considering he was markedly better in nearly every pitching statistic in the second half.

Tillman's first half ERA of 3.95 was largely the product of the fact that he gave up home runs at an extraordinarily high rate. Tillman's HR/FB rate in the first half was 15.6%. That's a little above Joe Blanton territory - at least for his career - and we all know how batters are able to tee off on Blanton from time to time.

Tillman's fastball has been described by many as "flat." As a result, it gets hit fairly well. Despite that, the main culprit for that astounding rate in the first half was Tillman's cutter.

Check out the last column. Tillman's cutter had an extremely high HR/FB rate - roughly 12 percentage points higher than the next closest pitch. His cutter was used predominantly against right handed batters (15.46% of pitches to RHB vs. 3.79% versus LHB). The usage makes sense, theoretically he should be able to start the ball off the plate inside and cut it over the inside portion of the plate at the last minute in order to jam a hitter or cut it off the plate at the last minute in order to generate weak contact or a swing that comes up empty. Unfortunately, Tillman's cutter was hit harder more often than not and he began to throw it less and less as the season wore on. I couldn't find any articles addressing his cutter usage except for an article from August 24, the date of Tillman's best start of the season, where he stated: "I didn't use my cutter today." 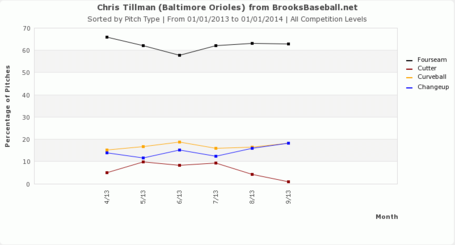 His cutter (maroon line), peaked roughly in July and gradually decreased until it was basically non-existent in September. The results, both on his HR/FB rate and overall, were better.

For the most part, the HR/FB rate on his other pitches stayed near their first half numbers. On the other hand, he put up a big fat zero on his cutter in the second half. We're dealing with a small sample, but it looks to me like scrapping the cutter was a good move for Tillman. His other pitches all saw their whiff percentage increase in the second half and his HR/FB rate dropped to a more manageable 12.6%. That's still a fair amount above the league average of 10.5%, but it will make things much easier for him going forward than his first half rate would.

What will not make things easier, though, is his home ballpark. Splits can be tricky because the samples are small, but the difference in Tillman's numbers are so drastic that I'm not able to ignore them. In 2013, Tillman's HR/FB rate in Camden Yards was 18.2% while rate on the road was 50% lower, at 9%. It makes some sense, considering that Camden Yards sports a park factor of 110 on home runs. It doesn't seem like that's changing anytime soon, so he'll just have to do his best to manage.

Where Does He Go From Here?

There's no doubting Tillman's talent. He was on prospect radars for years and was involved in one of the most lopsided trades in recent memory. He was able to overcome some lackluster showings at the major league level, regain some velocity, and become a valuable starting pitcher.

Issues that have plagued him in the past are seemingly on their way towards being fixed. His command is getting better, as evidenced by his 4% increase in zone%. He's getting better at throwing more first pitch strikes. He's generating more swings out of the zone, and he's striking out more opposing batters. The only real thing holding him back now is keeping the ball in the yard. Perhaps his new pitch mix will help him do that.