What is Jeff Samardzija?

As the Chicago Cubs consider trading or extending Jeff Samardzija, it first must be determined just what he is.

Share All sharing options for: What is Jeff Samardzija?

Throughout his somewhat-brief major league career, Chicago Cubs pitcher Jeff Samardzija has been looked at as something of an enigma. He really is a tough guy to figure out. Early on, the question was whether he was a reliever or a starter. After wild success in 2011 out of the bullpen, the answer to that question become the latter -- a starter -- and he was a darn good one at that.

Now that it has been firmly established that Samardzija is a starter, the question shifts. What kind of starter is he? Is he a top of the rotation arm that you can plug into any rotation and have him be at least a No. 2 starter, if not an ace? Or is he a power arm that fits as a sure number three guy, maybe a number two? After two years in the rotation, the latter of which was of the up-and-down variety, we still don't quite have an answer.

As we approach the Winter Meetings next month, the Cubs are facing a decision with their 28-year-old hurler: extend him or trade him? The question has multiple levels and answering such a query could give some sort of indication as to whether or not the Cubs are set to begin climbing out of this lengthy rebuild, or slipping deeper into the abyss. In order to determine the answer to that one, it must first be decided just what Samardzija is with two years left until he becomes a free agent.

With the Cubs, Samardzija is an ace. He's the top pitcher on a pretty terrible team, but one that does have a starting staff of decent quality for the most part. If you were to take Samardzija and put him in the American League East, though, is he still a top of the rotation guy? Depending on the day, he may be. Overall, though, it's hard to slap the 'ace' label on a guy who has had so much trouble reining it in on a consistent basis in the last couple of years. 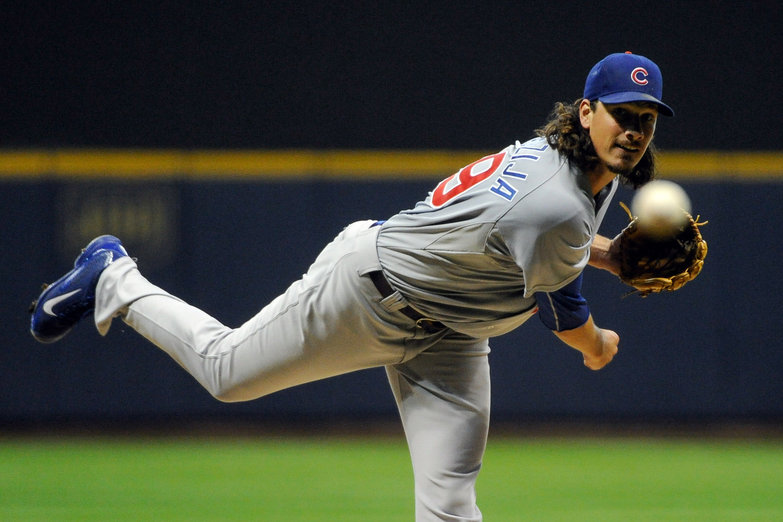 When Samardzija declared his intention to grab a spot in the rotation prior to the 2012 season, many scoffed at the idea. This was a guy who had been plugged into a starting job a couple of different times, but failed, and was coming off of a brilliant season out of the 'pen. He dazzled in the spring and that continued on through the 2012 season, and for stretches in 2013.

With the increased workload, Samardzija went out and pitched to a 3.81 ERA in 2012, along with a 3.38 xFIP. He posted the best strikeout rate of his career, at 9.27 K/9, and kept his walks down, with under three per nine. It was a very steady season before he was finally shut down toward the end of the year, and many felt that his game had another level. What transpired the following year in 2013 was a season of inconsistency and a realization that perhaps that extra level wasn't going to be reached.

Shark's 2013 season featured some of that brilliance from 2012, but he had difficulty reining it in at times. His ERA for the year wasn't really pretty at any point. He did pitch to a 2.31 figure in May, but that ended up over five for three of the next four months. His xFIP, however, was solid for much of the year. He pitched to a 3.15 number in June, but that did balloon up to 4.77 in July, a month which also included his lowest strikeout rate and highest walk rate of the season.

That's not to say that Samardzija couldn't elevate his game. But what's more likely with the numbers and the consistency we've seen is that Shark is much more likely a no. 2 or 3 guy. He's not someone you're going to throw in league with the Max Scherzers of the world. He's a power arm at the front of any rotation, but to classify him as an ace would be inaccurate. He'll still pull in a mighty fine haul for the Chicago Cubs, should they choose to trade him, but a contending team would likely be mistaken in hoping to plug him in as a no. 1 if they acquire him.

The bottom line is this: one does not need to dabble heavily into pitch selection or anything of the like in order to determine that Samardzija is not an ace. His development was skewed as the Cubs attempted to figure out what he was back in the Jim Hendry days, and it will hold him back from reaching that level. He's still a fine pitcher, and would be a strong addition to any club, but he's not going to be an ace at any point.

Randy Holt is a writer at Beyond The Box Score. You can follow him on Twitter at @RandallPnkFloyd.