An ace rejuvenated: What is Jon Lester now worth on the open market?

Jon Lester proved himself to be a frontline starter in the season's second half and during the World Series. But given how recently the left-hander looked to be a pitcher in decline, what is he actually worth on the open market?

Share All sharing options for: An ace rejuvenated: What is Jon Lester now worth on the open market?

Judging by his performance in the postseason, Jon Lester would appear to be headed for a big payday when he is eligible for free agency next winter. The left-hander carried Boston’s rotation to a World Series title, outdueling pitchers like Matt Moore, Anibal Sanchez, and Adam Wainwright in the process. Given his second half performance and proven durability (Lester has thrown at least 190 innings for six straight seasons), the southpaw’s $13 million team option for 2014 was a no-brainer for the Red Sox.

But just how much could Lester command if he hits the open market next winter? His relative youth for a frontline free agent (he’ll turn 30 this January) and sudden rejuvenation during the season’s final three months indicate that Lester would be a coveted commodity on the open market. Recent top starters—such as Zack Greinke, who just turned 30 in October—have commanded contracts that pay upwards of $20 million per season for five or more years.

For any pitcher on the wrong side of 30, such lucrative deals come with their own inherent risks, no matter who the pitcher being paid is. Yet Lester is somewhat of a unique case given how recently he looked like just another aging pitcher whose skills were in decline.

As the table below shows, the Red Sox hurler was roughly a league average pitcher (or perhaps slightly above average) from the beginning of 2012 through this season’s first half:

Of course, Lester’s performance since mid-July quickly erased many of the memories surrounding those struggles, but nevertheless, over the past two seasons, the 29-year-old pitched poorly over a far larger sample than the 87.2 innings in which he again looked like a top starter. Just how did Lester so significantly turn around his season after a year-and-a-half of inconsistency?

As others have noted, Lester’s fastball velocity increased throughout the year, averaging 94.1 mph from July 15 onward after sitting at 93.3 mph through the season’s first half. More importantly, Lester leaned on his fastball more heavily following the All-Star Break, throwing the pitch 48.9% of the time over this span and using his curveball, changeup, and cutter less during this period than he did in the season’s opening months.

This trend continued in the playoffs when he threw his fastball 50.8% of the time, while also leaning heavily on his cutter (26.7% frequency) and mixing in a few curveballs (13.2%). What really drove Lester’s success in the second half, however, was his ability to establish his four-seamer on both sides of the plate. The two zone charts below (the first showing Lester’s fastball locations prior to July 15 and the second showing these locations post-July 15) demonstrate how Lester altered his fastball usage mid-season: 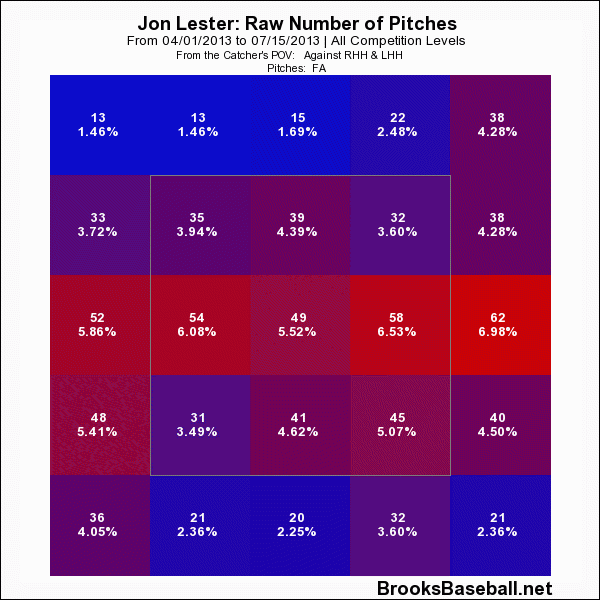 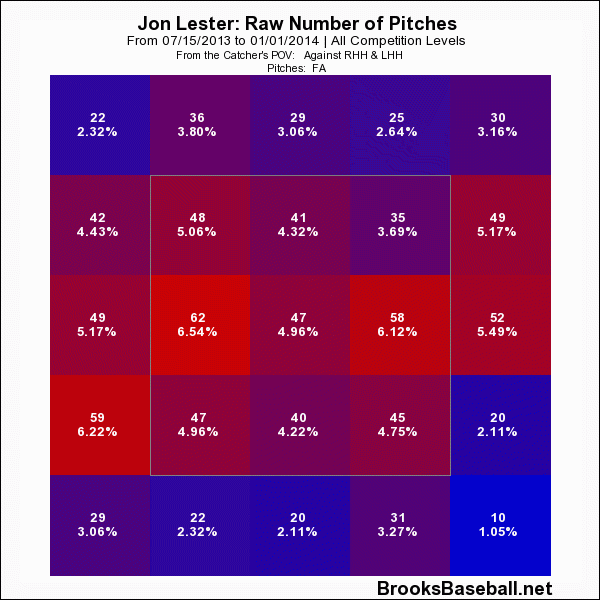 Most notable is how Lester attacked the left side of the plate with his fastball, either pounding his mid-90s heat in to right-handed hitters or away to lefties. The impact of this approach was on full display in the World Series, especially given how well Lester fared against Cardinals' righties.

Moving forward, though, the most important question for the Red Sox or any potential suitor of the southpaw is what this change in approach means for Lester’s future. Can he find continued success with this strategy? Or are his struggles in the 18 months prior to July 2013 more meaningful?

Considering Lester dominated so much with his fastball, it is fair to wonder if this can continue given what we know about velocity decline for pitchers as they age into their thirties. Despite his history of good health, Lester’s workload this season—228.2 innings, including playoffs—is a bit worrisome as well.

But it is also unfair to ignore how vital the left-hander was to Boston’s World Series run and his career track record as a whole. Southpaws who throw in the mid-90s and also possess this history of success don’t hit the free agent market too often. Zack Greinke’s six-year, $147 million deal is likely larger than what Lester would command, but he could also earn more than what other comparable pitchers like teammate John Lackey (five years, $82.5 million) and Jered Weaver (five years, $85 million) have made in recent seasons.

Either way, what Lester ultimately makes in his next contract will depend on whether he wants to re-sign an extension with the Red Sox, or take his chances in free agency. In many ways, the ball is in his court, and given the boatloads of cash being tossed at free agent pitchers these days, Lester could be in for a huge payday if he so chooses.