Share All sharing options for: Success rates for Advanced-A League prospects based on walk and strikeout rates

Should Carlos Martinez start in 2014? 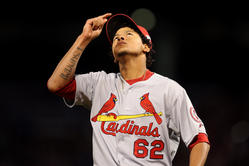 Should St. Louis leave Carlos Martinez in the pen next year, or are they better off with him taking the ball every fifth day?

Here are the historical results for prospects in Advanced-A, split by BB%, K%, and age. 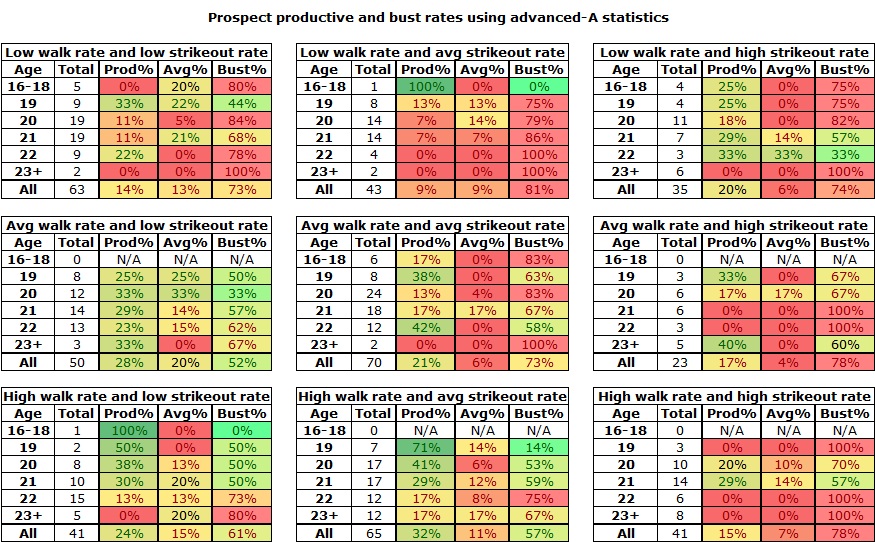 This is a continuation of Sinlge-A and a departure from earlier levels. Players must start honing their approaches, especially by keeping strikeouts down. Interestingly though, there have been a few older prospects with a bad approach (high Ks, low BBs) that still became productive. 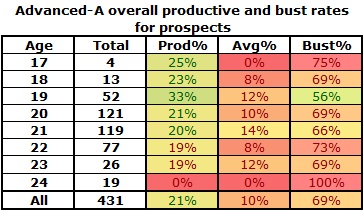 23 year-olds are still okay in High-A, but this should just be a quick stopover before AA. These are the late-blooming hitters, players like Jason Bay and Kenny Lofton who don’t stick in the majors until their age 25 season. Most top prospects are out of this level by age 22, with those at age 19 showing the best rate of becoming productive.

How do 2013 preseason consensus top 190 prospects and select draft picks that played in short-season A this year stack up in this analysis?

As I wrote in the Single-A post, Byron Buxton actually increased his already high likelihood of becoming productive with his time in High-A. There have been seven 19-year old prospects at this level with similar BB/K rates: Andruw Jones, Aramis Ramirez, Paul Konerko, Nick Johnson, Bernie Williams, Phil Plantier, and Andy Marte. There is always the chance of a bust, but that is a good list of very productive major league players.

Following Buxton are two prospects that many evaluators are down on this year: Deshields and Cuthbert. The former spent all year in High-A while the latter moved up to Double-A, maintaining a good approach there.

Near the bottom of the list are some interesting names: Cecchini, Polanco, Franco, Baez, and Sanchez. The first three were promoted to Double-A and increased their stock there. Baez and Sanchez, however, create interesting case studies. Sanchez, as a catcher, may be more focused on getting his defense right and his offensive approach (not walking enough) has suffered. Plus, he did improve in a small showing at AA and has shown growth at every level so far.

Baez is an elite, top-10 prospect in all of baseball. How can this system say that he has 13% chance to succeed based on his A+ stats (and 0% in AA!)? Frankly, he still needs to work on his approach. He has a career minor league 5.9 BB% and 24 K%. The list of prospects with similar rates is littered with busts (Joel Guzman, Julio Ramirez, Dane Sardinha). Fortunately Baez has multiple things working for him. First, he is more well-regarded now than those players were at the time, probably because he has more natural overall talent. Second, Glenallen Hill matched those rates and became productive anyway, so it is not impossible for Baez to do so. Third, and possibly most importantly, Baez has been increasing his walk rate, even as he moves up the minor league ladder. In AA this year, he walked a respectable 7.9% of the time, but it did come at the expense of a 29% strikeout rate. If his advancement continues to follow the same path, he will likely reach AAA next year. Just watch that walk rate, it’s important to his development.

High-A is the final rung on the lower level of the minor leagues. The only place to go after this is Double-A, my favorite level of the minors. It’s important for prospects to learn how to control strikeouts here, while walking enough. And all before they turn 24.

Which other players in High-A caught your eye this year?