The Indians moved quickly in adding an affordable outfielder, inking David Murphy to a 2-year deal. This could prove quite fruitful for the tribe.

Tuesday, the Cleveland Indians reached an agreement with free agent outfielder David Murphy. Reportedly, the deal shakes out to 2-years and about $12 million and a team option for a third year. The Indians outfield now includes Michael Bourn, Michael Brantley, Drew Stubbs, and David Murphy, with Nick Swisher and Ryan Raburn most likely seeing some limited time in the outfield as well. Murphy becomes the third left-handed hitter of the bunch, joining Bourn and Brantley, giving the Indians a lefty heavy lineup when the team faces right-handed pitchers, especially with Jason Kipnis and switch hitter Carlos Santana in the lineup as well.

#Indians deal with David Murphy is worth $12 million an includes a club option for a third year. Must pass physical.

From Murphy's point of view, this must have been the best deal he could find after souring his chances at a more lucrative and possibly longer deal with a paltry performance in 2013. Since joining the Rangers in 2008, Murphy has been a mainstay, especially against right-handed pitching in the Texas outfield. He's compiled at least 440 plate appearances in every season since 2008, and has had virtually zero medical issues since he recovered from a strained posterior cruciate ligament sprain in his right knee in 2008. Murphy broke out in 2012 after posting mediocre to moderately valuable numbers in the seasons prior. Before 2012 he has never posted a 2.0 win season, but in 2012 he posted a 3.9 fWAR, good enough for 18th amongst MLB outfielder that season, higher than Carlos Beltran, Josh Willingham, and now teammate Nick Swisher.

Then came 2013, a season in which Murphy fell of a cliff, but not just a small ridge, one of those Wile E. Cayote ones with the grand canyon below and everything.

Murphy's wRC+ of 129 in 2012 dropped to a measly 73 in 2013, his walk rate plummeted from 10.4% to 7.8%, and his ISO dropped from .175 to .154. Nothing went right at the plate for David Murphy in 2013, even his usually lovable career platoon splits (113 wRC+ vs. RHP, 71 vs. LHP) took a serious turn for the worse, coming in at 81 vs. RHP and 48 (wRC+) against southpaws. We so often come across players who during their most recent contract experienced fluctuating numbers, but ramp them up just prior to their move to free agency, but Murphy, obviously not purposely, suffered the opposite change in value.

Fortunately for Murphy, his defense in 2013 remained well above average, which made him just worth keeping in the lineup, and gives him one true consistently positive factor. Interestingly, when taking a look at Murphy's plate discipline numbers in 2012, his peak, versus his numbers in 2013, his valley, we see little difference.

As far as his batted ball statistics, Murphy saw a slight rise in his fly ball percentage, almost no change in his ground ball rate, but a difference in the number of line drives he hit, which went down from 21.2% in 2012 to 19.3% in 2013. Still, this attrition in the number of line drives hit cannot completely account for Murphy's huge drop in offensive production. Finally, take a look at Murphy's BABIP between 2008 and 2013, paying specific attention to the two most recent seasons in comparison to those that came before.

Like most hitters, Murphy's BABIP swung a bit back and forth between 2008 and 2011, but after experiencing a nice increase in 2012 that resulted in his best wRC+ and highest attained batting average, 2013 saw a hefty decrease in 2013. In fact, Murphy's BABIP ranked third lowest in MLB amongst hitters with at least 450 plate appearances, ahead of only Dan Uggla and Darwin Barney. For a hitter with above league average contact percentage numbers, and a career BABIP of .302, a .227 batting average on balls in play stands out like an insanely swollen and most likely infected sore thumb. This entire drop cannot be solely accounted for by randomness, but assuredly, someone on the bell curve has to end up on the low side, and it's quite possible that in 2013 that player was David Murphy. Even if his BABIP only rises back to the .280 neighborhood, still below his career average and a figure that would rank as his second lowest career BABIP, Murphy's other offensive numbers would dramatically improve. The Indians have obviously bet on such a reversion to occur come 2014 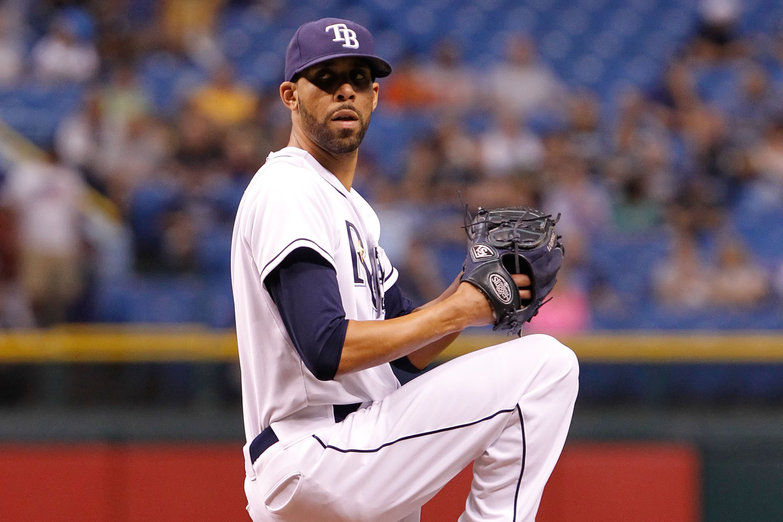 Looking for starting pitching, Alex takes you through the possibilities.

The Indians platoon their players well, and never seem to add a player who isn't multi-faceted. Murphy provides the team with even more speed and great defense in the outfield. Also, while 2013 represents Murphy's year to forget, it may have come at a great time for the Indians, a team that rarely spends heavily on the free agent market, and with needs to fill multiple vacated pitching spots including those left by Ubaldo Jimenez, Scott Kazmir, Joe Smith, and Rich Hill, signing seemingly damaged goods in Murphy to a team-friendly deal might work out very much in their favor. Steamer projects Murphy to rekindle his better hitting days, predicting Murphy to put up a 106 wRC+ 8.9% walk rate, and .284 BABIP in 2014. It projects a total fWAR of 2.0, which, no matter how we size up the value of a win, would probably exceed the value needed to equal Murphy's AAV of $6 million in 2014. More importantly, at 32 years old, this contract will either end when Murphy is 34, or 35 if the team picks up his option, meaning that the Indians will most likely get the last remaining years of Murphy's prime, unlike the Phillies who are banking on Marlon Byrd's post-prime seasons.

The deal represents a serious potential win for the Indians, and for Murphy, a lesser, yet still reasonable victory. The deal provides Murphy with more stability than he might have been otherwise seeing in offers from other clubs, and keeps him on a club will legitimately contend for the postseason once again. Murphy gets a slight pay raise, but given his 2013, and the fact that 2012 marked the only season in which he was worth more than 2.0 wins, the fact that he didn't end up with an AAV decrease should serve as a point of celebration. Murphy's signing becomes the third mid-level, platoon-heavy, older outfielder signing this offseason, with the Phillies signing Marlon Byrd and the Rays quick move on David DeJesus. It leaves the plethora of more talented and soon to be extremely rich outfielders like Shin-Soo Choo, Jacoby Ellsbury, and Nelson Cruz on the market. Removed outfielders like Byrd and Murphy from the equation this before December means that teams with hopes of signing a big fish who will lose out them, as teams inevitably do, will have fewer fallback options, and will more likely suffer, forced to make a trade, or forced to gamble on a young unproven commodity. Well done Cleveland, go out and find some replacement pitching, call it a nice offseason, and look forward to seriously competing for the top of the AL Central or, at the very least, another Wild Card play in game.