The Red Sox, the 2013 World Series and Baseball's Soul

When events conspire, sometimes we place irrational measures on all sorts of things, like baseball. Does it really mean anything?

Share All sharing options for: The Red Sox, the 2013 World Series and Baseball's Soul

Does baseball need a soul? That question was seemingly a second thought to Fox Sports contributor John Paul Morosi in a short piece he published after the Red Sox finished off winning game six of the World Series.

"Baseball's critics say the national pastime is passé. Not enough action. Not enough personality. Not enough fun. The 2013 World Series proved them wrong."

Morosi did ask one question in his piece:

"You wanted a sign that baseball has a soul, amid reams of statistical data?"

He answered his own query by using a quote from Red Sox 2nd baseman Dustin Pedroia that delved into why the Sox were able to win the 2013 World Series. He described how the team came together in Spring Training as a team, embraced the city after the Boston Bombing's, and that each player on the team had a strong connection to each other. Pedroia's words were perfect, exactly what the Red Sox and the media wanted to hear. Apparently, this confirms the fact that baseball has a soul.

Without delving into metaphysical and philosophical debates concerning the souls, let's consider the fact that baseball, being a sport can't feel, touch, taste, describe, or in any way have those characteristics that we as humans use to describe ourselves. Obviously this is an anthropomorphized attempt to show that while fans, teams, pundits, and even some players in baseball have embraced, welcomed, and incorporated statistical analysis, that the sport still elicits joy and other emotions from those who watch and follow it. That's a nice sentiment, and the fact that it gives Morosi, Jayston Stark, Gordon Edes, and Tom Verducci something to write about in the wake of the last baseball game of 2013.

I think most rational fans of sports, and baseball in particular, understand that while Pedroia's comments have some 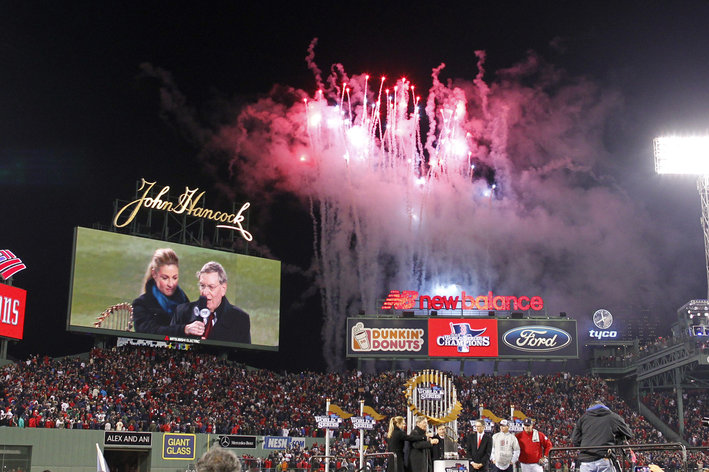 Steven looks at a franchise now classified by their recent success, not their prolonged agony

merit, that the Red Sox's talent, strategy, health, and a whole bunch of luck truly determined the winner of the World Series, ALCS, ALDS, and their 97 wins and 65 losses in the regular season. Groups do tend to accomplish more together, when they have psychologically centered themselves on a specific goal, so Pedroia's mention of the bonds between the Sox players probably added a bit towards Boston's latest World Series win.

Still, does any of this prove that baseball has a soul? Or, put in more palatable phrasing, does baseball still have the romantic feel to it that writers, players, and fans have ascribed to the sport for the last 120+ years? I'm not sure that this season in particular, this season's playoffs, or the 2013 World Series did anything to add or subtract from the idea that baseball has a powerful emotional and psychological affect on those who taken an interest in it.

Interestingly enough, those reams of statistics that Morosi mentioned, were quite possibly the most influential change made to the Red Sox that helped a team that, had it not made changes, seemed poised to remain in the latter part of the American League East for a second consecutive season. Who deserves the credit? Well, a number of groups, but the list surely includes the front office, the coaching staff, the medical staff, the players, and probably ownership for not butting into the baseball aspects of the team. Does any of that prove that baseball, as a sport, ever lost, gained, or regained a soul?

When baseball received a lot of bad press with the performance enhancing drug decade(s), it seemed to imply that baseball had lost its wonder and luster. Did everyone following the game instantly go from optimism directly to pessimism? Maybe, but more than anything, it caused the media to go around looking, and more importantly, finding immoral, unjust, and supposedly despicable acts committed by players, coaches, trainers, and the like. This season, a number of players served suspensions for PED use, and Alex Rodriguez will ensure that PED's will remain a fixture in the sports news cycle for at least another full year, and probably more. Okay, so the Red Sox won another World Series, and they clinched at Fenway Park, the last stadium that remains so oddly built that in boosts and diminishes specific types of players, but honestly, if baseball ever had a soul, did the Sox's win magically cause it to reappear?

These are questions that each baseball fan can answer for his or herself. In my opinion, enjoying, loving, and immersing oneself in a sport like baseball can be akin to the way art and music aficionados clamor to attend the latest gallery openings and concerts. The fact is that the feelings that surround baseball come from our own souls, each one of us, personally. I'm all for drama, but this World Series didn't reinvent the wheel, and it certainly didn't reinvigorate anything specific. Red Sox fans have been rabid about their team for decades, and have been obsessed with winning even more since the 2004 took home the title. Every fan is different, so let's just call this what it is: another championship for a big city sports team with a large fan base, that occurred not long after tragic events ripped through the same city. It's nice and fun, but does it give baseball a soul? You can sell that to someone willing to buy it.