As the offseason signings really start to heat up, we continue a preview of the market by looking at the available shortstops.

Share All sharing options for: Surveying the market: Shortstops

25 years ago, shortstops were generally quality fielders and nothing more. They hit near the bottom of the batting order because they weren't expected to hit in any meaningful way. Then Cal Ripken Jr. came along and changed the position forever, paving the way for the likes of Alex Rodriguez, Derek Jeter, Miguel Tejada, Nomar Garciaparra, Troy Tulowitzki and a host of others. In the late 90's and early 2000's, shortstops weren't just the best defensive players on the field, were also middle of the order bats for their clubs.

Lately, however, production at the position has dropped. Looking around the major leagues, it appears that there is a shortage of quality shortstops, especially relative to other positions. Here, you can see the difference in wRC+ and fWAR by position: 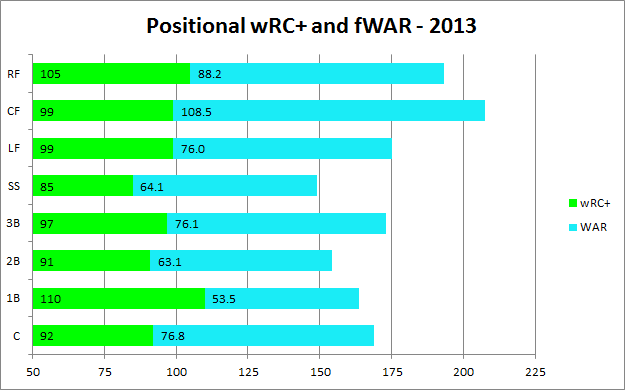 Thanks to a slight edge in defensive numbers, (plus a boost from the positional adjustments) shortstops top both first and second basemen in fWAR, but the position's 85 wRC+ is far lower than any other position, including catcher. In 2013, nine big league clubs got offensive production that was at least 30% worse than a league average hitter from their shortstops and six teams actually "lost" wins from the position in terms of wins above replacement.

Among those teams was the St. Louis Cardinals, which should surprise no one that watched the team play in the 2013 World Series. Maybe the biggest deficiency on the second best team in baseball was the glaring hole in the middle of the diamond that the team tried (unsuccessfully) to fill with Pete Kozma and Daniel Descalso. For certain, the Cardinals will be in the market for a shortstop this offseason, as will the New York Mets, the New York Yankees and potentially a few other clubs. That should make the two top options very attractive.

Despite a .140 postseason OBP, Stephen Drew set himself up for a nice pay day simply by playing solid defense and not being Pete Kozma during the month of October. In all seriousness though, Drew is like Robinson Cano and Brian McCann to a lesser extent -- he's the best available option at a premium postion, making him mighty quite desirable.

After overcoming an ankle injury that limited his play last season, Drew bounced back to post a three and half win year for Boston. With his mobility back, the 30-year-old proved that he remains a very good defensive shortstop with above average range and a strong arm. He's no slouch with the bat either, posting a .337 wOBA in his first year in Beantown. Drew is a fastball hitter, using quick hands to spray line-drives all over the field, and generating enough power to hit 12-15 home runs annually.

That's not to say that he comes without flaws. For starters, he's not exactly durable, playing more than 130 games just once in the past five seasons. He also struggles hitting same-sided pitching, faring 29% worse against southpaws over his career and he strikes out a little too often given his power numbers. That said, he's young enough to return value for the life of a three-year contract and he's one of the few big league shortstops that doesn't hurt his team too badly in any one aspect of the game. Even with draft pick compensation attached to him, Drew should have little trouble finding a two or three year deal with an AAV close to $15 million.

We touched on Perlata a bit in our preview of the third base market, stating that:

Before a 50-game PED suspension last year, Peralta was on his way to the best season of his career, hitting .303/.358/.457 (good for a 123 wRC+) with 11 home runs in just over 100 games. While he's not the prototypical bopper some think of at third, he has a career .152 isolated power and health permitting he should hit 15-20 home runs next year. In the field he's not a plus defender by any stretch, but the defensive metrics have pegged him between slightly below average and slightly above average over the past three seasons.

Some may actually prefer Peralta to Drew, citing more power, a stronger track record of health, and no draft pick compensation, but I'd rather have the former Boston shortstop given the choice. Drew is younger and when both are at their best he's the much better defensive player. He also draws more walks, and Peralta's perceived advantage in power is just that -- perception -- as the two have isolated power figures of .158 and .160 respectively over the past three years. Regardless, both are miles ahead of anyone else freely available and there should be several teams interested in each of them. With question marks at both third base and shortstop, the New York Yankees seem like the perfect match for Peralta, especially on say a three-year, $$36 million deal.

Let's be honest, by far the most intriguing trade rumor circulated this offseason is the talk of a Cardinals-Rockies swap involving Troy Tulowitzki. Tulowitzki has a very strong case as the best shortstop in baseball, leading the position (excluding Ben Zobrist) in wins above replacement over the past three years despite 63 fewer games than anyone else in the top-ten. He's as well rounded as they come, providing value with the bat (121 career wRC+) and in the field (5.7 career UZR/150), and best of all, he'll be 29 at the start of the 2014 season.

So why in the world would Colorado even think about dealing him? Well, the Rockies have some needs, to say the least. The team finished last in the NL West thanks to the league's 22nd best offense and 28th best pitching staff. As the old adage goes, "you have to give something to get something", and, Tulo's value will never be higher given the demand for shortstops, his age, and his production level. Plus, he's by far their most expensive player, with $134 million left on his current deal.

The guess is that Tulowitzki stays in Colorado, mostly because franchise faces and building blocks like Tulo are seldom traded anymore. That said, if any team has the talent to get a deal done, it's the Cardinals. If John Mozeliak offers a package of Matt Adams, Shelby Miller and more like the rumors have suggested, I think Colorado needs to at least explore the possibility. Adams would be a nice replacement for the retired Todd Helton, Miller could anchor a rotation that's about to add Jonathan Gray and Eddie Butler to the mix and the team could use the savings elsewhere to truly rebuild the team in hopes of overtaking the Dodgers in the next few years. Again, it's doubtful that the talks go anywhere, but it's certainly a situation to keep an eye on as we approach the Winter Meetings.

Two shortstops have actually already inked deals with new clubs, Nick Punto and Brendan Ryan. Punto signed a one-year, $3 million deal with the Oakland Athletics, a really savvy move by a savvy team. Punto is one of the top super-utility players in the majors, providing okay hitting acumen with the ability to play defense at all three infield spots. It also gives the A's a great deal of depth and flexibility if they want to explore the trade market, a topic our own Ben Horrow covered over the weekend.

Ryan heads back to the Yankees on a one-year deal and he to adds depth for a team in desperate need of help in the infield. Ryan leaves a ton to be desired with the bat, offering just a .278 wOBA over his career, but he's among the best glove men in the industry according to the defensive metrics and the eye-test.

Once again, we see a position get extremely thin after you move past the elite tier. The rest of the class is made up of depth signs like Willie Bloomquist, Clint Barmes, Jamey Carroll, and Alex Gonzalez. Among them, Rafael Furcal's name stands out as a the most interesting gamble. If he even regains a portion of his former abilities, he's miles ahead of the remaining players. The ugly reality is that those teams that miss out on Drew or Peralta will likely be looking again for a shortstop yet again next offseason when Hanley Ramirez, Jimmy Rollins, Jed Lowrie, Yunel Escobar, and Derek Jeter may hit the market.