Surveying the market: Second Base

While we know that there is one standout second baseman available this offseason, the rest of the free agent and trade market offers plenty of excitement as well. Which players will be the best bargains, which will be the busts, and where are they all headed? We take a look as we continue our position-by-position preview of the offseason.

Share All sharing options for: Surveying the market: Second Base

Even to the casual baseball fan, the importance of up-the-middle talent is easily recognizable. Concepts like the defensive spectrum and positional adjustments for wins above replacement have been established and accepted, supporting the very notion that catchers, middle infielders, and centerfielders do in fact provide more value to their teams if they are comparable hitters to other position players.

Despite that, production from the second base position has declined significantly over the past five seasons. Here you can see the trends in wRC+ and fWAR from 2009 through this past year: 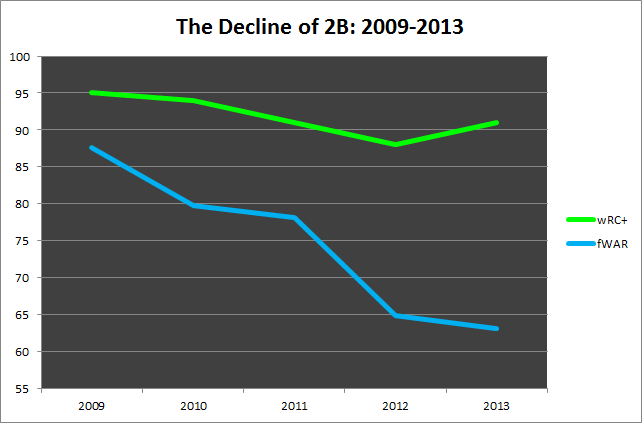 Intuitively, I assumed the drop coincided with a larger emphasis on defense from the position -- a decision that would move the Alfonso Soriano's of the world to other spots -- but actually, 2013's crop of second baseman provided the second lowest defensive fWAR component since 2000.

Essentially, second base ain't what it used to be, and teams are adjusting accordingly. The Cardinals, Nationals, and Padres all look very smart after moving third base prospects Matt Carpenter, Anthony Rendon, and Jedd Gyorko up the middle with quality results, but sadly not every team has that capability. Instead, the rest are left to develop their own talent, test the waters of free agency, or look to make a deal.

Last year, the market wasn't especially strong, but the one semi-attractive option available in Marco Scutaro did land a very nice three-year, $20 million contract (though that was partially a thank you for his part in the 2012 World Series win).

This year, once you get past the top player, second base gets sparse pretty quickly yet again. That said, there are a few bargains to possibly be had, and the potential for a very healthy trade market. Let's take a look.

Cano is truly in a class by himself when talking about free agent second baseman. And we shouldn't limit the conversation to just second baseman either, considering that in the past three years, only Mike Trout, Miguel Cabrera, and Andrew McCutchen have been more valuable in terms of wins above replacement than Robinson Cano. While the interest in signing him is largely a product of the quality of his play, the two things that really set him apart are his durability and consistency. He's played at least 159 games in seven straight seasons and his wRC+ has been between 134 and 149 in each of the last four years. Some will note that his defense regressed a bit from 2012, though really it looks as if he just fell more in line with his career norms. In essence, he's settled in as a six-win player that is showing no signs of decline.

Recently ZiPS creator, Dan Szymborski, projected that Cano will be produce WAR totals of 6.0, 5.6, 5.2, 4.5, 3.9, 3.5, 2.6, and 1.8 from 2014-2021. Using the estimated price of a win of $5 million (since we're using projections), and a four percent inflation rate, Cano is worth somewhere in the range of $185 million for the next eight seasons. Both the total value and the AAV of that deal would rank in the top-15 all-time, but they would pale in comparison to the $300 million that Cano and his representation are reportedly seeking.

The problem, at least from my vantage point, is a lack of bidders. Very few teams can entertain the thought of such a contract under any circumstances, but we can eliminate Boston (Dustin Pedroia), Philadelphia (Chase Utley), and Texas (Ian Kinsler/Jurickson Profar) immediately because they simply aren't looking for a second baseman. The Cubs, while maybe intrigued, seem like a doubtful bet to offer a long-term year deal to a 31-year-old. Initially, my choice landing spot was with the Dodgers, though their signing of Cuban-import Alexander Guerrero seemingly makes them less likely as well. That leaves just the Detroit Tigers, the Los Angeles Angels and the New York Yankees. Realistically the Tigers and Angels feel a bit like long shots and LA would have to deal Howie Kendrick to even open up a spot, leaving the Yankees as the logical landing spot. Then again, we have seen a "mystery team" end up with a number of free agents in the last few offseasons, so I wouldn't rule anything out. At the least, there should be enough competition to drive Cano's price up over $200 million total -- I just don't see him going all the level that he's looking for.

Although we see a huge drop from Cano to the next tier of players here, Infante should represent an upgrade for some team. Albeit in different ways, he has produced right around three wins above replacement in each of the past two seasons. In 2012, he showed his defensive prowess with a 9.7 UZR/150 and this past year he managed a 117 wRC+. He's a solid, if unspectacular performer with only his ability to make contact rating as an above average skill. If he were a few years younger, Infante may be in line for a mid-level, multi-year deal, but being that he's a 32-year-old middle infielder who derives a lot of his value from batting average and BABIP, we'll posture that he'll be among the best bargains this offseason with a two-year deal, $15 million contract.

During the last two seasons as LA's starting second baseman, Ellis produced about four and a half wins above replacement to the team. That may seem untrue, if only because Ellis was so woefully miscast as the two-hole hitter in the Dodgers' lineup for much of his tenure, but he was in fact a quality player. 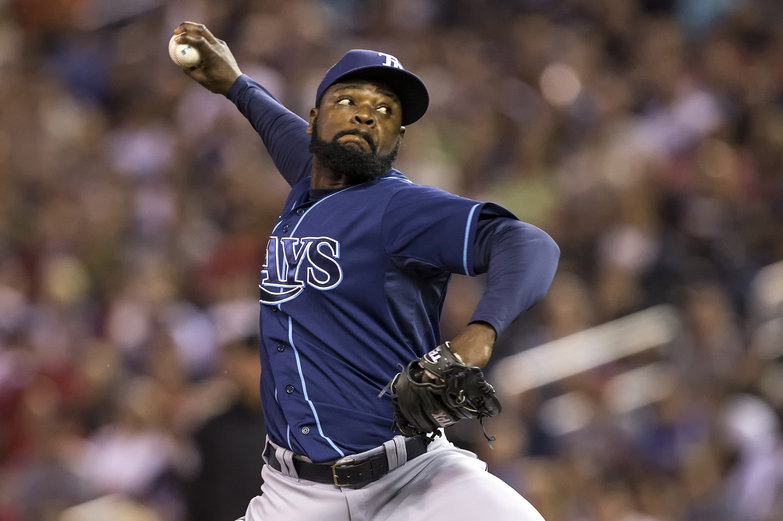 Earlier in the week, Ken Woolums previewed the market for free agent relievers.

As a hitter, while below average, once you adjust for the parks that each played in Ellis was essentially equivalent to Brandon Phillips this year. And defensively, he remains one of the best glove men around, registering the highest UZR/150 (18.3) of all big league second baseman in 2013. Keith Law recently identified Ellis as one of the best bargains at middle infield this offseason, calling him, "a fair bench piece who can slap around a lefty a little and handle second base." I agree that he'll be a bargain, but I also am more optimistic on Ellis, thinking that he can be a fine regular (if you call 130-140 games a regular) for a team, especially one that is rebuilding. Anything less than three years with an AAV of $5 million or less should be considered a strong contract for the signing team.

According to several reports, Brandon Phillips will be traded this offseason. The long-time Reds' infielder began 2013 really well, hitting .296/.347/.481 prior to June 1, but everything after that, both on and off the field, really couldn't have gone worse. Despite driving in more than 100 runs for the first time in his career, Phillips sported his lowest on base and slugging percentages since arriving in Cincinnati and he failed to reach 3.0 fWAR for the first time since 2006. And worst of all, his off-field distractions may have actually been worse than his production. In August, an interview in Cincinnati Magazine was published in which Phillips had some choice words for owner Bob Castellini and later that month he erupted on Reds' beat writer Trent Rosecrans for criticisms made on Twitter.

Even taking all of that into consideration, however, there would still be a strong market for Phillips if not for the four-years and $50 million left on his contract. That's a really steep price to pay the age-33 through 36 seasons of a waning middle infielder, and that's before you consider that he needs to be acquired for a package of players as well. Given the other available options, someone will pay for Phillips' services -- I just doubt they'll get a good return on the investment. 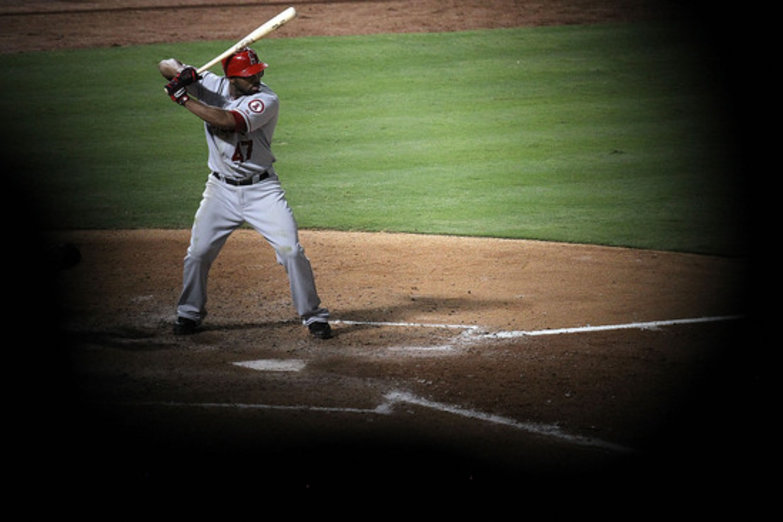 Had the Angels' 2013 gone as expected, Howie Kendrick would probably not be available this offseason. But mounting pressure from the recent spending the team has done may force Jerry DiPoto to deal Kendrick to get some starting pitching, a necessity considering that the team's starters had the ninth worst ERA in all of baseball last year.

If they do make him available, Kendrick should be much more desirable than Phillips. Kendrick is just as productive and he's three years younger and considerably cheaper than Phillips, with just two years and $18.5 million left on his contract. He may not age gracefully because he's a mediocre defender and it's hard to forecast him continuing to post .340+ BABIP's into his mid-30's, but for a team looking to upgrade now, he's a quality, cost-effective player that is worth giving him a mid-tier prospect for.

The remainder of the free agent market, unsurprisingly, leaves a bit to be desired. After Cano, Infante, and Ellis, teams are left with platoon and utility options like Jamey Carroll, Alexi Casilla, Nick Punto, and Skip Schumaker. Among the leftovers are two intriguing players, however. While probably not an everday player any longer, Kelly Johnson has hit 16 or more home runs in four straight years and he can be worth one to two wins to a team that can put up with his subpar defense, maybe a strikeout heavy team like Detroit. Interesting for another reason is Brian Roberts who will probably cost next-to-nothing thanks to his injury history, and still offers some hope for one more quality season.

On the trade front, there are several other players who will or could be available. More than likely the Braves will listen to offers for Dan Uggla, it just remains to be seen if anyone will actually make an offer given his contract and steep drop in effectiveness. The White Sox could choose to move Gordon Beckham and hand second base off to prospect Marcus Semien. Sure he hasn't been a league average hitter in four seasons, but Beckham only just turned 27 and I'm sure there'st least one or two teams out there that think they can help the former first rounder. Rounding out the trade market are two players that don't necessarily fit in with their current teams: Danny Espinosa and Ian Kinsler. I doubt either one of those two gets moved, but the return could be quite nice if they are shopped this winter.

Much like we saw with the Catchers, this market has one very large fish and a bunch of smaller, less significant pieces. Cano is the type of player that will provide an instant upgrade to any team and for the next three seasons I bet he looks like a solid signing. It's the years after that that would worry me if I were signing the check. Plus, the rest of the market has some strong options especially if a team is willing to make a trade. It may not look like it at first glance, but if you squint hard enough you can see that there are plenty of avenues to improve a second base situation this offseason.