A popular belief among members of the analytical community in baseball is that relievers are a dime a dozen. In many cases this is true, but is there a point where teams should break the bank for relief pitchers?

Share All sharing options for: Surveying the market: Relief pitchers

The belief that relievers are often grossly overpaid needs to be challenged. Based on value alone, relief pitchers are paid at pretty average rates. In 2013, right-handed relievers on free agent deals earned $5.60 million per fWAR, and lefties made $5.94 million per fWAR. For reference, here's a table for the other positions -- for players who were paid on free agent deals in 2013: 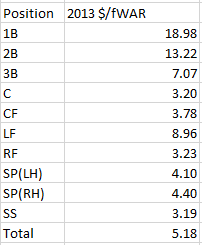 While relievers are certainly paid more than players at other positions, the overpayment isn't as drastic as it is at other positions. If anything, starting pitchers have been undervalued by the market compared to relief pitchers -- which seems like a problem given how important starting pitchers appear to be on a roster. Before concluding that relievers aren't overpaid, the other alternatives need to be considered. Take the following table, which shows dollars paid per win at all positions in 2013 minus free agents: 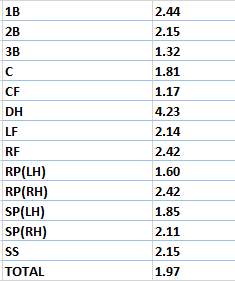 As can be seen, it is still more efficient to build a bullpen using in-house materials. However, this is the truth for every position -- and it's even more true for other positions than it is for relief pitchers. It's not surprising, but relief pitchers appear to be paid just about average on these deals.

On an aside, you'll note that CF is impacted by Mike Trout producing 10 wins at essentially the league minimum, and DH includes only David Ortiz.

So, with that information in mind, let's proceed to the market for relief pitchers.

Due to the nature of the position, the term "elite" is different when it comes to relief pitching. Rather than thinking of a six-WAR player as being very good, any reliever that puts up 1.5 fWAR or better is among the best players at his position. In fact, only 20 relievers reached such a mark in 2013. On this free agent market, there are two relievers that would fall into this category: Joaquin Benoit and Fernando Rodney.

Joaquin Benoit is an interesting case, because he doesn't have a past as a "proven closer" as he wasn't regularly in the role until this year with Detroit. That being said, there might not be a better reliever on the market than Benoit. Since switching to the bullpen full time with Texas in 2006, Benoit has five years with an fWAR of 1.3 or better and is 14th in fWAR since 2006 -- and 16th since the start of the 2010 season. An immediate thought might be that 14th or 16th sounds average, but when it is considered that each team carries a bullpen of six or more relievers -- and there are thirty teams -- 14th and 16th are pretty darn impressive. The key point here however is that Benoit has been consistently good over time, which is something that relievers rarely accomplish. Since 2010 (big shock, it was his first season with the Rays) Benoit has a 3.06 xFIP.

Fernando Rodney is also an "elite" pitcher on this market -- and coincidentally his career was also turned around when he went to Tampa Bay. Over the past two years, Rodney has produced 3.6 fWAR and has an xFIP of 2.88 --that's arguably a top five reliever in the game. For those worried about whether he can continue this outside of Tampa, consider the fact that Joaquin Benoit did not appear to be impacted at all -- he put up one of his best seasons in 2013.

Due to relative risk, it's actually not advised to pursue either of these players in free agency. Both are significantly into their 30's, and the volatile nature of relievers suggests that they should just be left alone given the high prices they are going to demand.

When played well, the secondary market for relievers can be a place of great value. While free agency naturally drives up the ratio of dollars paid per win, many secondary relievers go overlooked. For example, LaTroy Hawkins -- one of the members of this secondary market -- has produced two seasons of 0.7 and 0.8 fWAR during the last three years. Prior to the 2013 season, Hawkins was signed to a deal worth only $1 million by the New York Mets -- so the Mets added nearly a win of value for a million dollars.

While the true value of these players will not be presented well in this market (the volatility of ERA leads to a pretty reactionary free agent market for relievers) there are certainly good deals to be found. One such player is Grant Balfour, who has performed similarly to Fernando Rodney and Joaquin Benoit in the past in individual seasons. Oh, and he was also resurrected by the Tampa Bay Rays. (The new market inefficiency, perhaps?) He doesn't carry the same reputation as the other two players, but he deserves every bit of the cash. It's possible that teams recognize this, but it's likely a safe bet to say he gets less on the open market than those other two players in the elite class.

There are other players that should be great steals as well. Oliver Perez has produced 1.3 fWAR the past two years -- and he did quite well in his role as a full-time reliever in 2013. While he's still got control issues, his strikeouts came at an astronomical rate. Manny Parra is another interesting and underrated name on this market. While his numbers in Milwaukee in 2012 weren't great, his peripherals were good -- and they took a big jump in 2013.

While there are plenty of good deals to be had on the secondary market, there are also going to be some poor contracts handed out. One of those will likely go to Joe Smith -- owner of a 2.29 ERA in 2013 and 2.42 ERA over the last three seasons. While his results could continue, his peripherals have been in another universe as he does not strike out very many batters and can suffer from control issues at times.

For your reference, here's a list of players that will be available on the 2014 market as relievers:

It's always going to be true that it's more efficient to add players in any way that isn't free agency. However, it's not true that relievers are amazingly overpaid relative to other players in the league. The position certainly carries its fair share of terrible deals, but it's not as if there aren't also great deals to be found on the free agent market for relievers. Due to the volatility at the position, teams must always proceed with caution when signing relievers. At the same time they must not be afraid to chase after them, either.

Ken Woolums is the Transactions Editor at Beyond the Box Score. You can follow him on twitter @Wooly9109.