The four seam fastball dominates the pitching landscape and the pitcher's arsenal. Whose heater came first and whose brought up the rear? Let's find out, with the help of linear weights and PITCHf/x data.

Share All sharing options for: First and worst: Four seam fastballs of 2013

The primary weapon of most pitchers, the four seam fastball (FA) is an integral part of a pitcher's arsenal. While considered a power pitch that draws its potency from the velocity at which it's thrown, many who utilize the pitch rely more upon the movement of the pitch to generate swings and misses or, at the least, weak contact.

With these differences in use in mind, and with the 2013 season fully in our rear view mirrors, let's now look back and find out whose four seamer was the most and least effective.

The use of pitch type linear weights is a great way to answer this question -- using run expectancies across all pitch counts for a given pitch type can tell us in a qualitative fashion who had a good fastball. Using the stat of wFA/C, which standardizes values on a 'per 100 pitch' basis to counter sample size issues, we find that the best fastballs, separated by starter and reliever, and how many runs are saved (or given up) by using the pitch:

Pretty straightforward stuff and something that has been provided by FanGraphs for quite some time. It would be simple to end the story right here, but let's dig a little deeper and account for velocity, movement, and frequency of use for these four seamers. By using that information along with linear weights we can get a better feel for whose fastball tops the charts.

To do this, we will focus on pitchers who used the four seamer at least ten percent of the time in 2013; for starters, this isn't a huge deal and we essentially end up using qualified starters, as determined by FanGraphs and innings pitched. We will use qualified relievers as well, but will have to do some extra sleuthing to make sure everyone we collect for this analysis satisfied the 10% FA rule. From there, we will take the aforementioned wFA/C data along with velocity (vFA), vertical movement (FA-X), and horizontal movement (FA-Z) data, creating z-scores for each in order to compare apples to oranges. Then, we can add our four newly created z-scores for a given player and create a new standardized score of FA 'goodness', now, with the added dimensions of velocity and movement included in the score. Now, not only do we possess the value of the pitch as was given by run expectancy, but also a measure of the "goodness" of a pitch due to its velocity or movement. As seen earlier in the week over at Baseball Prospectus, the relationship between velocity and movement and their effects on pitch outcomes is complex, so the marriage of all of these variables with run expectancies can shed additional light on how pitchers gets batters out with a particular pitch.

So with the methods out of the way, how does the previous table change, if at all?

Off the bat, we see that our first two relievers don't make the cut, for better or worse. For Tony Watson, his four seamer was only used 5.3 percent in 2013, while Jamey Wright pulled out the pitch 11 times, or 1.0 percent. For the starters, Matt Harvey's dominant fastball now tops Cliff Lee's, now that velocity and movement components of the pitch are utilized. The breakdown of component z-scores are as follows:

By the looks of it, the best four seamers of 2013 were thrown by pitchers who have above average grades for velocity and movement, while the least effective four seamers are thrown by pitcher who are more reliant upon off speed offerings or change of speeds to get hitters out, so the pitch for them is more of a table setter. Kontos, in particular, is known for his excellent slider, which he used close to 50 percent of the time. Medlen, a finesse pitcher, used his two seamer and change up more frequently than his four seamer to generate outs.

Let's now look at how the best and worst utilized their respective four seamers, and how they fared against batters through the lens of batted ball and plate discipline data. 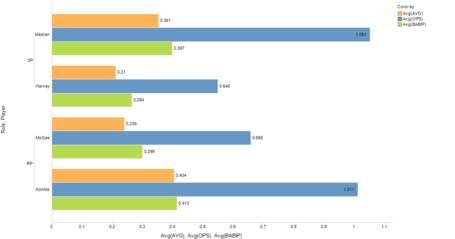 With this first chart, we see the top and bottom two pitchers of interest and their respective batting average against (AVG), on base plus slugging (OPS), and batting average on balls in play (BABIP) data for their FA's in 2013. Not surprisingly, the top performers lapped the worst performers, but we do see that the both Medlen and Kontos with BABIPs that are abnormally high, so perhaps their four seamer performances for 2013 are aberrant.

Moving on to batted ball data, we continue to see the trend; the top four seamers are less likely to turn into hard hit line drives and more frequently hit into the ground; with McGee's HR/FB rate, we do see the danger of poorly located fastballs with high velocity and greater movement. 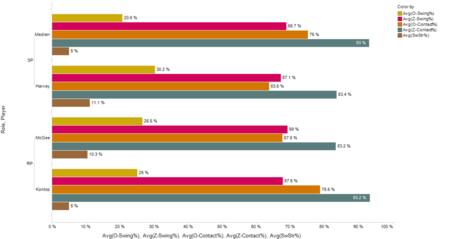 With the brief mention of McGee's location, let's take a closer look at each of the pitchers' plate discipline and command stats. Here we see that the better four seamers are tougher to get to, as judged by the contact rates of pitches in the strike zone (Z-Contact%) and swinging strike rate (SwStr%). For the top FA's there is an added ability to miss bats with the pitch.

Last, let's see how each uses the four seamers, with respect to placement; first the starters: 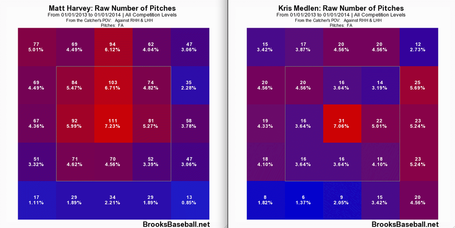 Harvey definitely makes more use of the upper parts of the strike zone with his four seamer, compared to Medlen, who will work the corners with the occasional heater right down Broadway -- this is especially the case in 3 ball counts. Medlen also appears to use the four seamer as a show pitch, up in the zone, to set up either his change up or two seamer down in the zone, thus disrupting the hitter's timing with the change in eyeline. 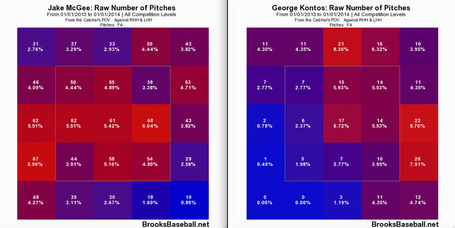 Here we see McGee basically rearing back and firing. While his walk rate was slightly elevated in 2013, he typically walks few very few opposing hitters. With that in mind, we see a pitcher with supreme confidence of his best pitch and his willingness to throw it at any time to anyone, letting the velocity and movement of the pitch do all of the work. For Kontos. the heat map does show a propensity to elevate the pitch, more than likely as a way to change a hitter's plane of vision in order to set up his wipe-out slider.

In general, the best four seamers show possible effects of high velocity and increased movement playing a role in the success of a pitch that rarely surprises hitters. The combination of high velocity and movement is one that neutralizes all but a few hitters with relative ease, so the desire to not fix what isn't broke with respect to relying upon a given pitch is strong. Medlen and Kontos provide a similar situation, but in reverse; their sub par offerings can be explained in part by their reliance upon better pitches in their repertoires and the use of those pitches in situations that carry higher run expectancies. As such, a so-so pitch is rarely used, thereby making it so-so both due to the average velocity, lack of movement, and thus less use in higher leverage situations. While it is still the bread and butter pitch of the vast majority of pitchers, and the default offering when things get tough, there remains much variability in the effectiveness and quality of the four seamer throughout baseball.