The Best Pitches of the MLB Postseason So Far

The MLB Playoffs always showcase an incredible variety of pitching talent, but what have been the best individual pitches so far in the postseason? I set out to answer this question, picking the five best offerings we have witnessed in the 2013 playoffs.

Share All sharing options for: The Best Pitches of the MLB Postseason So Far

One of the more enjoyable aspects of MLB's postseason is the plethora of pitching talent we get to witness on a nightly basis, and this year's rendition of the playoffs has been no different. Between an exciting crop of young starters and a group of familiar veterans, we've already seen some fantastic performances this October.

With that in mind, I decided to pick five of the best single "pitches" that have been on display this postseason, a task that proved tougher (given the number of tremendous offerings out there) than I ever expected. My selections are based largely on how these pitchers—and individual pitches—have performed in the playoffs, but some thought has been given to how quality these pitches were over the long haul of the regular season.

Ever since Francisco Liriano made his major league debut with the Twins back in 2005, his slider has been among the most effective and whiff-inducing pitches in baseball. Though a series of arm injuries have threatened to derail his career on multiple occasions, Liriano has been able to bounce back numerous times now, and his wipeout slider has been the one constant in a career of ups and downs. After back-to-back seasons in which he posted an ERA above 5.00 (and walked over five batters per nine inning), Liriano’s 2.92 FIP and 3.1 WAR in 161.0 innings pitched in 2013 seemed to come out of nowhere. The Pirates left-hander threw his slider more than any other pitch this season, featuring it 31.9% of the time, while inducing a .166 batting average against and a 30.3% Put Away percentage with the offering, which represented the sixth-highest mark in baseball, according to Baseball Prospectus.

Liriano’s slider was on full display in his Wild Card victory against the Reds when the 29-year-old struck out five and allowed only one run over seven innings. He generated a ridiculous 17 swings-and-misses, including 13 with his slider, which he threw 52% of the time against Cincinnati. On Sunday, the Pittsburgh hurler again dominated with the offering, garnering five whiffs with the pitch against St. Louis. I could go on and on about Liriano’s slider, but these video highlights tell the story pretty well:

Alex Cobb proved to be one of the better stories in baseball in 2013, rebounding from a scary line drive off his head to post a 3.26 FIP and 23.2% strikeout rate in his first full major league season. At one point during the year, Cobb even had Miguel Cabrera in disbelief over the quality of his curveball. But it is Cobb’s sinker that has been the main force behind the right-hander’s success, with the pitch fueling his 55.8% groundball rate in 2013 (third-best in MLB). Indeed, every one of Cobb’s pitches has movement, most notably his sinker, a reality that frequently prevents opposing hitters from making hard contact.

Against Cleveland in the Wild Card game, Cobb scattered eight hits in 6.1 innings and induced numerous groundballs to get himself out of jams, something he has made a habit of all season long. Of the 20 outs Cobb recorded against the Indians, 10 came on groundballs, the most noteworthy being an inning-ending double play against Asdrubal Cabrera with the bases loaded in the fourth inning:

Jon Lester’s cutter has been his biggest weapon for years now, and that remained the case against the Rays last Friday, when the left-hander allowed just two earned runs, while striking out seven in 7.2 innings pitched. Lester began the game with four straight strikeouts, two of which came on the cutter, and generated six whiffs with the pitch on the day. During the regular season, the 29-year-old threw his cutter in 23.7% of his total offerings (second-highest behind his fastball), even though his success with it varied during the season.

In the second half, when he posted a 2.77 FIP and .285 wOBA against, Lester actually eased off his cutter usage, throwing the pitch 20.7% of the time. Nevertheless, the offering actually increased in effectiveness, with the pitch’s whiff percentage, whiff/swing percentage, and batting average against all improving after July 15. That Lester rediscovered his form with help from his cutter, then, is little secret, and the fact Tampa Bay struggled against the offering in Game 1 of the ALDS portends continued success for Boston’s lefty as the postseason marches on.

With all due respect to Adam Wainwright’s and Clayton Kershaw’s hooks, Sonny Gray’s curveball against the Tigers on Saturday night was as good as any we have seen in the playoffs thus far. That Gray was able to dominate a deep Detroit lineup with basically two pitches—a fastball and curve—owes in large part to the differences in miles per hour and similarities in release point the two offerings showed on Saturday. As the graph below demonstrates, Oakland’s rookie right-hander did a masterful job mixing up his two pitches, with his fastball and curveball roughly averaging a difference of 13 miles per hour in velocity: 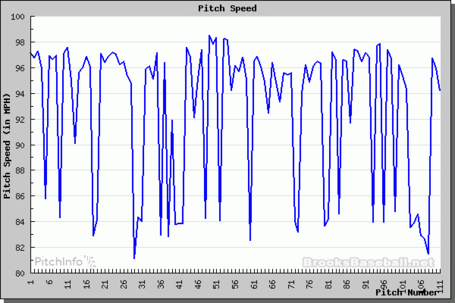 Even more important, though, was how similar Gray’s release points were with the two offerings, something which enabled him to fool Tigers hitters time and again even when he left the curveball up in the zone: 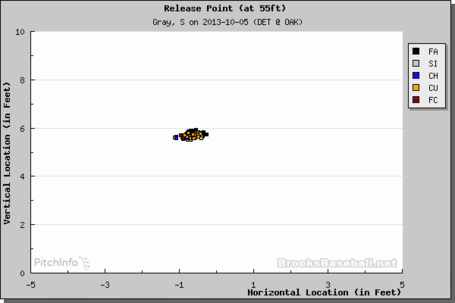 In the regular season, the 23-year-old’s curve was his most effective pitch, yielding a 38.9% whiff/swing percentage and a remarkable .023 ISO. That success, of course, continued against Detroit, with Gray garnering five swings-and-misses with the curveball, while allowing just four hits and striking out nine over eight innings.

Over his last two outings, Michael Wacha has pitched 16 innings, given up just two hits, and struck out 18 opposing batters. The rookie right-hander’s changeup has been a huge reason for his incredible success, generating a .180 batting average against and the best whiff/swing ratio (41.0%) of his five offerings, which ranks among the top 20 changeups in baseball. Against the Pirates on Monday, Wacha dominated with a heavy diet of fastballs, topping out at 96.3 mph, but he also garnered four whiffs on just 17 changeups, including on his first strikeout of the game.

Wacha’s changeup has long been his best weapon, with John Sickels of minorleagueball.com calling it "outstanding" when the Cardinals called Wacha up back in May. Although the 22-year-old’s postseason adrenaline pumped his fastball up a few ticks on Monday, the changeup remains his most important pitch and the key to Wacha’s continued success moving forward.

All stats courtesy of Brooks Baseball and FanGraphs.com unless otherwise noted.

Alex Skillin is a Staff Writer for Beyond the Box Score and Staff Editor for SoxProspects.com. He writes, mostly about baseball and basketball, at a few other places across the Internet. You can follow him on Twitter at @AlexSkillin.