Who has the better curveball, Wainwright or Kershaw?

Fastball velocity grabs headlines, but devastating breaking balls punctuate the highlights reels. Two of the National League's best starting pitchers feature two of the game's best hooks. The only question is, which one is better?

Share All sharing options for: Who has the better curveball, Wainwright or Kershaw?

On Thursday, Adam Wainwright spent the afternoon reintroducing the world to his excellent curveball and making the Pirates' hitters wish they hadn't gotten out of bed that morning. Brooks Baseball identifies 33 curveballs from Game 1 of the NLDS and 11 swings and misses out of 22 swings against Wainwright's signature pitch. The performance, in which he allowed three hits, no walks, and just one run while striking out nine across seven innings, set off an interesting conversation on Twitter: What's the best single pitch in this year's postseason? Now that particular question strikes me as impossible to answer because there are too many factors to address in one reasonably sized analysis. The idea of comparing the quality of individual pitches, however, opens the door to all sorts of interesting questions.

The one we'll consider here is how well Wainwright's curveball stacks up against another great curveball, Clayton Kershaw's? This isn't to argue that these are the two best curveballs and this will decide which stands above all of the others, but rather simply to consider the differences between the two. Most consider Wainwright and Kershaw to have excellent curveballs while also having other high quality pitches. Additionally, they are among the best handful of pitchers in the league and a comparison between two pitchers of similar talent levels seems most interesting.

Just to get a sense of who we're dealing with, let's take a quick look at their 2013 numbers:

What we're looking at is two of the best four or five pitchers in the National League and two of the best dozen pitchers in the league without a doubt. They do things in slightly different ways, but they both feature an excellent hook. There are a variety of ways in which to evaluate a pitch, so let's consider how Wainwright and Kershaw stack up using several different measures.

Let's first make use of some of the Pitch F/X data available at FanGraphs. Accordingly, Wainwright throws the curveball more often and has therefore delivered more value with that pitch than Kershaw, but per 100 pitches, Kershaw's curveball grades out better.

It's also important to consider more data than just this season, so let's look back to the start of 2008 and consider the same information:

This isn't a perfect way to answer our question either because it's not really fair to consider the pitchers at two different stages of their careers. Wainwright is much older than Kershaw and has also had Tommy John Surgery. We can see from the information presented that Wainwright throws the pitch more often to great effect, but Kershaw's curveball appears to be a better pitch on a individual basis as of late.

Certainly, pitches don't happen independently of one another, so identifying run values is often difficult. Let's consider some more fundamental data. If we jump over to Brooks Baseball, we can consider a variety of other numbers. Let's also simplify things by focusing solely on 2013 (postseason included).

So both pitchers are inducing the same percentage of swings against and Wainwright is allowing a few more to be put into play. Additionally, of the balls that make it into play, a few more are going for hits and extra bases against Wainwright. It's looking like Kershaw's curveball is a little bit ahead, but we also have to think about the fact that they throw from opposite sides and hitters are not evenly distributed between left and right-handed. Let's look at the same table split up by handedness:

The actual platoon splits are actually a little bit surprising, but there is some selection bias and the actual differences are terribly large. You'll notice that Kershaw does induce more swings and misses to lefties, but nothing else is too shocking.

So we've seen that Wainwright has used his curveball more often, but pitch for pitch Kershaw's has been better. There are all kinds of factors like sequencing, opponents, and basic pitch selection that influence these results, but the evidence is leaning toward Kershaw at this point.

Let's consider each in complete isolation. Instead of results and averages, what if we just look at movement? 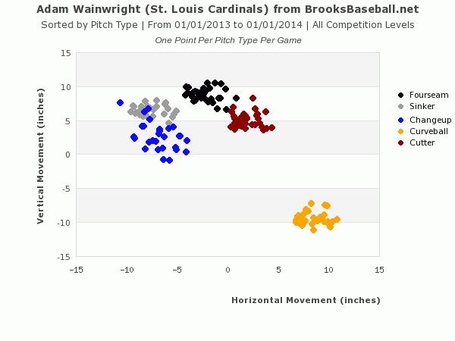 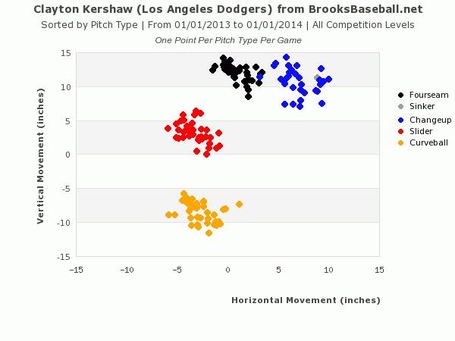 By this measure, if you're looking for movement, it's Wainwright's without question. He averages more horizontal and vertical movement on his curveball, although Kershaw's curveball is likely more deadly in part because he features a slider that moves the same amount horizontally without the drop.

And we can also look at their best curveballs by movement in both directions. Note that these values represent separate pitches and not a single curveball for each pitcher:

I think looking at the actual movement on the pitches gives us an idea about why we think so highly of Wainwright's hook. Obviously, both pitchers feature excellent curveballs, but Wainwright's looks more impressive to the naked eye. It's clear from the data that Kershaw uses it within his overall arsenal more effectively, but some of that is based on his other pitches and how he chooses to attack hitters. Wainwright's curveball is more aesthetically pleasing because it moves more dramatically than Kershaw's.

Both pitchers had marvelous seasons and used their curveballs to great effect. Kershaw had better results with his in 2013, but Wainwright's is a bit more fun to watch. So far, we haven't seen Wainwright and Kershaw face off in 2013 in anything except the NL Cy Young race, but at this point, we might have a chance to see them duel in the NLCS if both teams are able to advance. It would be a delight for fans of excellent breaking balls and likely a nightmare for anyone paid to face them.