Stephen Strasburg and Jordan Zimmermann have both developed into top of the rotation quality starters after returning from ulnar collateral ligament injuries, with the Washington Nationals carefully rationing their innings loads in the process. Has each returned to their respective pre-surgery prominece?

Share All sharing options for: DC shutdowns - a comparison of Stephen Strasburg and Jordan Zimmermann (part 1)

Stephen Strasburg and Jordan Zimmermann of the Washington Nationals are two of the more coveted starting pitchers in the National League, if not all of Major League Baseball. While both have become the talented hurlers they have in different fashions -- Strasburg via a big triple digit fastball and as the number one pick in the 2009 MLB Amateur Draft, Zimmermann through a more traditional four pitch mix and by way of a tiny Division III school -- they do share a common thread beyond the threads on their backs. In the earlier stages of their major league development, both sustained ulnar collateral ligament tears, requiring the sometimes dubious Tommy John (TJ) surgery to replace the UCL. While this in itself is commonplace these days, the concomitant handling of their pitching loads by the Nationals, by way of a strict inning limit post-surgery was not; in fact, much ado was made in particular of the ramifications of the ending of Strasburg's 2012 season, as the team prepared for its first playoff series in the history of the franchise since relocating to DC. Whether or not the protocol in place for the Nationals is properly steeped in science and evidence based medicine, it is one that has shown some success, in the form of Zimmermann's return from TJ surgery in 2009, one year before Strasburg's surgery. Also, early returns on other TJ surgery survivors Taylor Jordan and Lucas Giolito are encouraging enough to warrant that the methods of the Nats are prudent, albeit controversial.

So how has it worked out thus far for Strasburg and Zimmermann? Have they responded as one would hope and have been able to return to the pitchers they were pre-surgery, or have they lost a little something along the way?

Before we set out to look at the seasons of the aforementioned hurlers, I would be remiss to not mention and discuss the work done here at Beyond the Box Score by Jon Roegele and Eric Post, who did a great job of researching and deliberating on the characteristics of pitchers who went on to have TJ surgery, comparing them to the league average pitcher, both with respect to velocity and pitch movement. You can read more about effects on velocity here and here and on pitch movement here. These articles are fantastic resources and preface a lot of what I discuss here. Along with these links, more discussions related to the surgery itself and other sundry notes penned by Jon as well as Will Carroll can be found here at BtB and also here. For those with a little extra jingle in their pocket, the 2013 Hardball Times Baseball Annual has an article by Jeff Zimmerman and Brian Cartwright on the impact of the surgery on the players it fells and is another great resource. For the purposes of this article, we will go the Cliff's Notes route and will discuss matters with a couple of basic caveats -- TJ procedures, recovery times, and rehabilitation protocols are increasingly aggressive, lending players to return to action sooner than in years past, fastball velocity is usually the first thing that returns post-surgery, and 'touch' for secondary pitches are the last thing to return, sometimes taking multiple seasons to fully return, if at all. We should also keep in mind the surgery dates for both Strasburg (9/3/2010) and Zimmermann (8/19/2009) -- therefore, post-surgery years will be 2011 to current and 2010 to current, respectively.

For this article, I am limiting the scope of the Strasburg's and Zimmermann's results to pitch velocities, movement, and selections -- do they still have their fastballs and their secondary pitches, or have the effects of the surgery lent themselves to lower velocities and different methods of getting hitters out? In a later article, I will review and discuss some of the PITCHf/x data that can correlate with the return of command and control.

For both Strasburg and Zimmermann, a big fourseam fastball is at the top of their arsenal, with both finishing 2013 in the top ten for NL fastball velocity for starting pitchers -- Strasburg's average fastball at 95.3 miles per hour (MPH) and Zimmermann's at 93.9 MPH rank second and eighth, respectively. However, with our first graph, we find an interesting divergence between the pitchers: 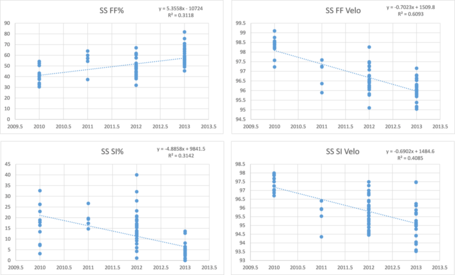 Here, we see that not only is Strasburg's fourseam velocity (FF) has dropped progressively since his debut, but so has his twoseam/sinker (SI) velocity. Both have reasonably large Pearson's R-squared statistics that are both statistically significant. Also plotted is the percent usage of Strasburg's fastballs -- while he used the twoseamer quite a lot in 2012, he apparently has gone to other pitches in his repertoire in 2013 to work off of his fourseamer; I will have more on that shortly. Now, Zimmermann's fastball:

With Zimmermann's fourseamer, we don't see the drastic differences in velocity or percent usage as we do with Strasburg, but we do still see a statistically significant increase in fastball velocity over his career. Overall, Zimmermann's fastball has returned nicely to pre-surgery velocities and then some.

The velocity aspects of each pitcher's repertoire are as follows: 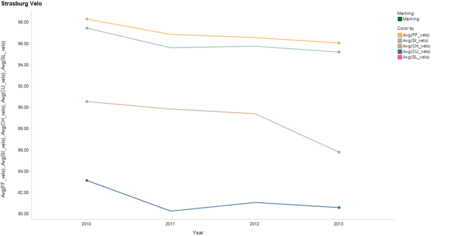 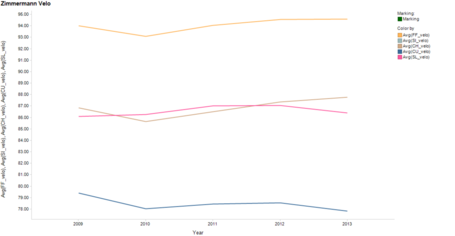 The take away message here is that not much has really changed for either with respect to the secondary pitch velocities, aside from their curveballs, with both pitchers having a larger velocity difference between the curve and their fastballs in 2013 compared to previous seasons, with both Pearson's R-squared's being statistically significant. Strasburg also seems to be taking more off of his changeup this past season, but not in a statistically significant fashion.

With pitch velocity discussed and the pitch usage percentages already teased upon, let's now focus on those and look at the rest of each hurler's pitch selection over the years: 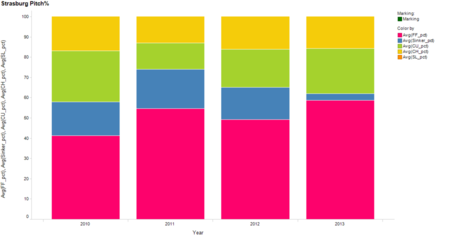 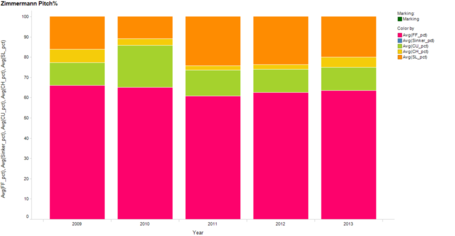 For Strasburg, the biggest change post-TJ is his utilization of the twoseamer/sinker -- he has essentially scrapped it this past season, in favor of more offerings of his hammer of a curve ball and arguably the best changeup in the majors. In spite of the marked drop in velocity, Strasburg is relying upon his fourseamer in 2013 more than any other season in his career. This is a trend similar to what is seen with Zimmermann, who doggedly replied upon his fourseamer, never wavering too dramatically from season to season with regards to how often he used it in a game. In general, Zimmermann's 2013 pitch selection mimics 2009 greatly, as compared to his other post-TJ seasons of 2010-2012, which saw him favoring a fastball/slider mix more so than the fastball/curve combo. Statistically, the only significant changes in offerings came from Strasburg, whose sinker use dropped significantly across years, as previously mentioned.

Let's now turn to pitch movement, first with the horizontal aspects of each pitch: 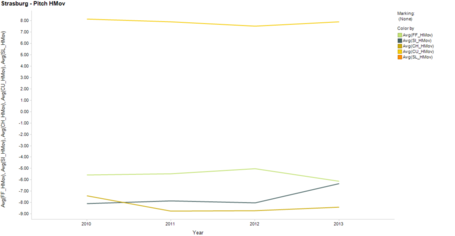 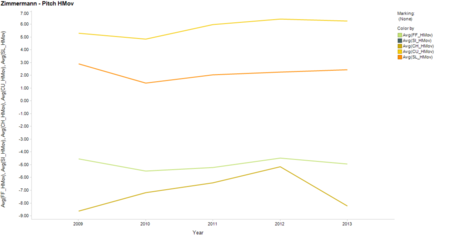 In 2013, both pitchers appear to have one pitch in particular undergo a drastic change in the amount of horizontal movement (HMov) it exhibits over the years -- for Strasburg, it comes from his now scrapped sinker, and for Zimmermann, his curve ball appears to have more tilt to it. These two pitches aside, we see both pitchers enjoying a return to pre-TJ HMov after a couple of seasons of variability in the statistic, post-operatively. Vertical pitch movement changes across season are as follows: 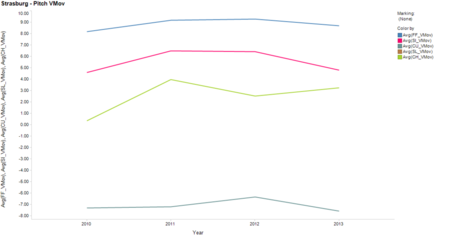 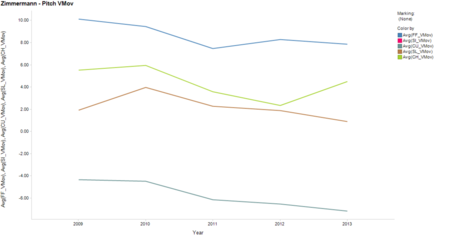 With regards to the vertical movement of their repertoire, we again see a large amount of variability across years, but with a general trend of each pitch reverting back to roughly pre-surgery averages. Three statistically significant correlations were seen between Strasburg and Zimmermann pitches -- for Zimm, significant drops in curve ball and slider movement were seen across season and Strasburg's change up has gained additional drop as of late. Overall, it appears that the vertical movement of pitches, whether it's natural or something that is worked on through hand placement or additional pronation of the hand or by some other means, appears to suffer the most with respect to consistency, post-surgery.

Overall, much of what we see here with Strasburg and Zimmermann are things that commonly occur post-TJ surgery; however, it does appear that Strasburg's once ultra-elite fastball velocity may have gone by the wayside in the seasons after his surgery, with statistically significant decreases seen across year. While this 2-3 mile drop in average velocity would be discouraging to most other pitchers, Strasburg's still formidable fourseamer is still among the best in the league, even if it is a pedestrian 95 MPH these days. Also of interest is the mix of pitches seen across season after Tommy John -- both Nats hurlers seem to have deployed alternative secondary pitches to go with their fastballs in the seasons immediately after surgery, but in time, finally reverting back to the essential 1-2 pitch combo that they used before surgery.

Questions, comments, feedback? Leave them in the comments section, or tweet me -- otherwise, part two will be coming shortly and will discuss the command and control aspects of Strasburg and Zimmermann.