The art of the strikeout: Darvish vs. Guthrie

What makes Yu Darvish and Jeremy Guthrie different? Well, a lot of things do, but one of the biggest is their ability to strikeout major league hitters. Darvish was MLB's best pitcher strikeout pitcher last season, posting a ridiculous 11.89 strikeouts per 9 innings. Guthrie was slightly less prolific, posting a 4.72 K/9.

Share All sharing options for: The art of the strikeout: Darvish vs. Guthrie

Jeremy Guthrie has always been a fan favorite, though his ability to be exciting and strikeout batters was never one of the reasons why. Perhaps it's his love of shoes, his willingness to interact with fans on Twitter, or his strong fundamentals.

Yu Darvish too, is a fan favorite. Darvish however gains stardom and adoration of baseball fans everywhere because he strikes out just about everyone he faces, and seems poised to reel off a 20-strikeout games or no-hitter on any given night.

Darvish and Guthrie have both been relatively successful, but the key difference between the two is their ability to strike out batters. Let's take a look at why these two pitchers fall on opposite ends of the spectrum when it comes to striking guys out.

Part of Yu Darvish's charm is that he throws eight different pitches. You might be familiar with a certain gif showcasing some of Darvish's offerings. It's no surprise that some compare Darvish to one of the best pitchers in recent memory. What makes Darvish so good is that he knows how to put hitters away. Take a look at the following charts which show how many whiffs he gets on each of his pitches, and how often he uses each pitch in a given count: 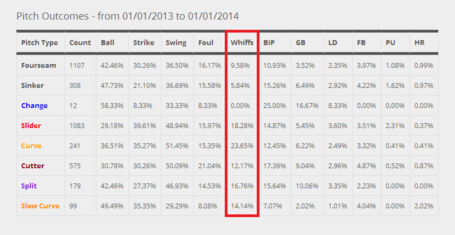 As you can see above, Darvish gets a lot more swings and misses on his breaking stuff, specifically the hard curve and slider. To a lesser degree Darvish is also able to get swings and misses with his splitter, cutter, and slow curve. 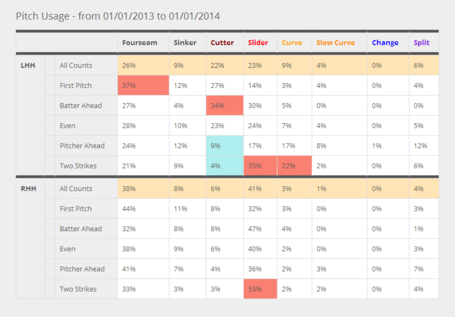 The red highlighted squares show a scenario in which Darvish throws a given pitch 10% more than his baseline. For example, you can see that Darvish is 11% more likely to throw a fastball on the first pitch than he is any other point on average. The interesting thing is that with two strikes, there's a significant chance a batter is going to see a certain type of pitch: breaking balls.

Using some simple math we can reveal some truly staggering numbers about Darvish's ability to get swings and misses on 2 strike counts. No doubt that getting whiffs is crucial for a pitcher looking to strike guys out, and Darvish is one of the best at it.

Those numbers are truly remarkable, and don't even take into account pitches in the zone at which the batter does not swing. In total Darvish has a contact percentage, the percentage of pitches a batter makes contact with when they swing, 9 percentage points lower than the MLB average. It's no surprise that Darvish lead MLB in Contact % (70.2%) AND Swinging Strike % (12.6%) this season.

Jeremy Guthrie is, well, not Yu Darvish. Darvish strikes out, on average, 11.89 batters per nine innings. Guthrie is at the opposite end of the spectrum, striking out just 4.72 batters per nine innings. Guthrie throws six pitches, though he's not as prolific at getting swings and misses with as many of them as Darvish. In fact, Guthrie only throws one pitch (his slider) with a whiff rate better than Darvish's worst pitch (his sinker). You can see Guthrie's whiff rates below:

I didn't highlight the column for strike percentage because the key difference between Darvish and Guthrie is their ability to miss bats. This will become more clear later as I explore some of the other indicators of strikeout success for Guthrie.

However, this isn't an approach issue. Guthrie goes after batters similarly to how Darvish does. He throws his best swing and miss pitch in two strike counts, keeping some of his more hit-able offerings in his back pocket: 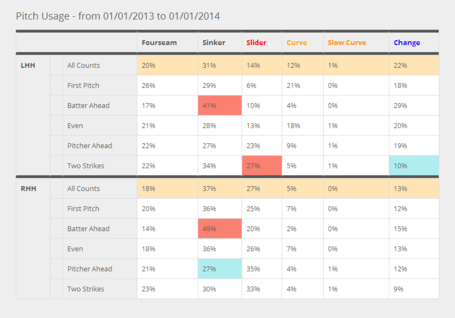 There is one caveat to what I listed previously, and it is that since Guthrie doesn't have a true swing and miss pitch, his slider is really his only option when looking for a big whiff. In order to keep hitters off balance though, he must also throw his other pitches, primarily his fastball and sinker to avoid becoming too predictable. You can see that while Guthrie does throw his slider 27% of the time when the batter has two strikes, he's still using his fastball and sinker over 55% of the time. Similarly, right handed batters have a 33% chance of seeing a slider on a two strike count, but they are much more likely to see a fastball or sinker which combine to make up 53% of the pitches he throws in that scenario.

That's likely part of the problem for Guthrie. He just doesn't have any pitches that guys have a real hard time making contact with, which means he has to attack hitters in a different way. All this despite having seemingly decent velocity (93+ mph) with both his fastball and sinker. It's no surprise then to see Guthrie mentioned in Neil Weinberg's article about guys with good velocity who strike out fewer batters than one might expect.

Earlier I mentioned that the key difference between Darvish and Guthrie is their ability to miss bats. While being able to pound the strikezone is important, it's not necessarily a trait that is vital to striking out a lot of batters. In fact, Guthrie throws about 5% more pitches in the strikezone than Darvish, who's actually below MLB average in that stat. The problem for Guthrie is that even though 47.7% of the pitches he throws are in the strikezone, batters make contact on 92.2% of those pitches at which they swing. This compares poorly to Darvish who limits opposing batters to contact on just just 83.7% of pitches in the zone at which they swing.

Strikeouts per nine innings is not the only stat that Darvish and Guthrie are on opposite ends of the MLB spectrum in. I mentioned that Darvish lead MLB in 2013 with swinging strike percentage, at 12.60%. Guthrie was worst in MLB in that statistic as well, posting a swinging strike rate of just 5.10%.

I hinted at this before, but overall contact rate, the percentage of pitches batters make contact with when they swing, is another example of juxtaposition between the two pitchers. When a batter swings at any given Jeremy Guthrie pitch, there was an 88.30% chance that they made contact last year. Batters facing Darvish weren't so luck, making contact on just 70.20% of the pitches they swung at. Once again, those were the worst and best figures in major league baseball, respectively.

I'm not trying to say that being able to throw strikes in unimportant when it comes to getting Ks. What I am saying is that the difference between the best and worst pitchers in K/9 for MLB is their ability to miss bats, getting swings and misses. Darvish is the best in the business at doing so, and his stats prove that. Guthrie on the other hand? Well he's managed to be effective despite being among the worst in baseball at getting strikeouts. That doesn't make him a bad pitcher, it just makes him a very different one from Yu Darvish.