Many have considered the connection between strikeout rate and fastball velocity to be obvious, but Joe Kelly's prominence this October causes us to pause and reconsider.

No one would argue that there is a positive relationship between strikeout rate and average fastball velocity. The connection is obvious. It is easier to make contact against slower pitches than faster pitchers and we assume there is a velocity at which a batter could simply not make contact. Many people have demonstrated the relationship, like Dave Cameron back in 2009 and Blake Murphy earlier this year, and pretty much everyone has come to the same conclusion. Fastball velocity matters, but on its own it can only tell you so much. Joe Kelly seems to be the perfect example of that fact.

To get a sense of what we're dealing with let's take a look at Pitch F/X fastball velocities from 2008-2013 and compare them to K% for every season of 40 innings or more. The following graphs include the same data and consider a few different potential types of relationships. The first is a simple linear relationship, the second is an exponential fit, and the third is a theoretical exponential relationship I drew in imagining that once a pitcher routinely threw 104 or 105 mph, batters would have almost no chance to catch up. 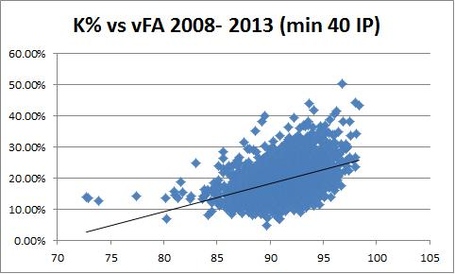 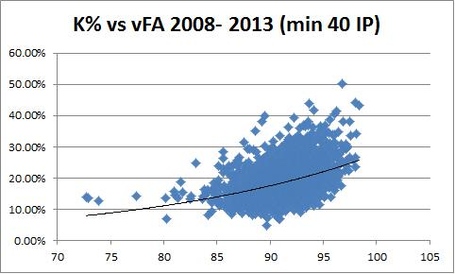 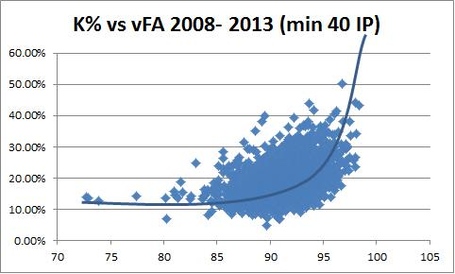 The graphs demonstrate that the relationship is positive, just as the previous writers have done and also communicates a few other things. First, strikeout rate is obviously bounded at 0% and 100%, meaning that we'd expect asymptotic behavior at the ends. If you throw either 200 mph or 250 mph, you're probably going to strike out whatever percentage of batters you don't walk. Second, it's also important to consider that relationship is likely not linear. Moving from 90 to 91 mph generates a different effect than moving from 97 to 98. Finally, it's clear from the previous work and from these images that we're talking about an R squared between .18 and .23. Fastball velocity explains something like 20% of a pitcher's K%, but it doesn't explain everything.

That makes perfect sense. At the extremes, velocity matters a great deal. If you could throw 110 mph, the only other variable that is likely to matter is whether or not you can throw it near the zone. But if your velocity is more typical, other factors play a bigger role. The quality of your command, the quality of your breaking ball and offspeed pitch, the amount of movement you generate, your ability to hide the ball, and many other factors contribute to your strikeout rate in conjunction with velocity.

I'm often interested in the outliers more so than the typical performers. It doesn't surprise me that some pitchers do better than other with similar velocity numbers, but those differences can probably tell us something valuable about the entire endeavor. Joe Kelly is where we started, so Joe Kelly is where we'll return. He got me thinking about this idea because I couldn't think of a lot of pitchers who threw as hard as he did (93.3 vFA) while generating such a low strikeout rate (14.9%). It turns out he isn't the biggest outlier.

There are many ways to present those who throw harder than most and also strikeout fewer than expected, but let's take the set of those pitchers who were in the top 25% in fastball velocity and the bottom 25% in strikeout percentage. Of the 2,158 pitcher seasons in the sample, 48 met the criteria. Here they are (sorted by lowest K%):

Joe Kelly's 2013 season shows up five from the bottom of this list. He's out of the ordinary in that only about 2% of pitchers fall into this category, but he just barely falls into this arbitrary category. I don't think any of these pitchers are terribly surprising. Most of the time high velocity pitchers who don't generate strikeouts either lack command or good secondary stuff. The results here aren't surprising, but they can prove valuable.

During the offseason, I'll pursue a more granular analysis of this population to see if we can better understand the network of causes behind hard throwers failing to generate strikeouts. How do command and secondary stuff factor into the equation? Is this a repeatable "skill?" This should prove useful from a scouting and development standpoint as we might be able to use that information to better predict future performance. This is the first step in a longer process, so for now, just sit back and peruse the list. Perhaps we'll call them the Brad Penny All-Stars.