The finalists for the annual Gold Glove awards came out recently and as pundits everywhere scramble to make their selections. Who should win, and will the eventual winners truly deserve the recognition?

This past Friday, Rawlings announced annual finalists for the award denoting the supposed top defensive players at each of the nine positions that make up a baseball team's defense. Separated by league, the baseball apparel producing company denoted three players per position as the finalists for the Gold Glove award. For years, decades even, Gold Glove awards have been known the sporting community around as an accolade of prestige when it comes to the defensive side of baseball. No other major sport in the U.S. recognizes the best defensive player at every position on a team, with the NBA denoting a Defensive Player of the Year, and then secondarily putting together the All Defensive 1st and 2nd team squads. Football separates the Rookie of The Year award into one defensive winner and one offensive winner, but only baseball gives out 18 top defender awards each season. 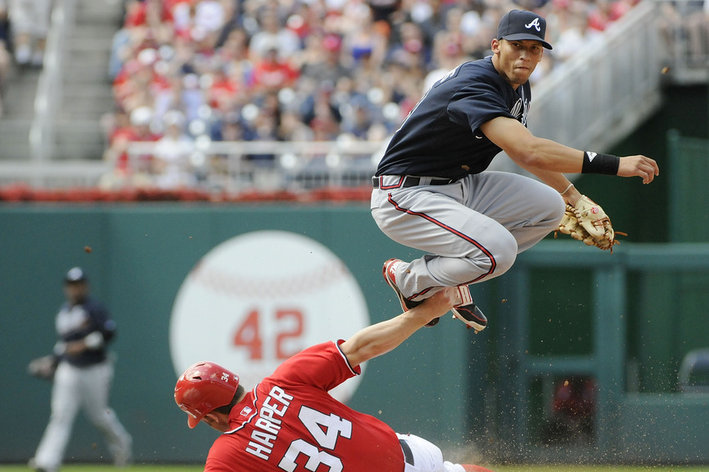 Rob Neyer looks at the changes made to the Gold Glove selection and discusses the pros and cons.

This precedent has rational to it, as each defensive position on the baseball field has specific and often quite varying responsibilities and nuances, some more obvious and others quite hidden from the casual or even more veteran observer. Earlier this year, Rawlings announced that they would be working with SABR to incorporate some sort of defensive metric into the tabulation of the winner of each Gold Glove award as the awards have fallen under criticism that the winners, voted on by coaches, players, etc... were chosen not based solely on defensive prowess, but on fame, reputation, and even offensive abilities.

Despite the spirit of the changes to the determination of the winners of the defensive awards, most baseball analytics and Sabermetrics enthusiasts continue to agree that determining the best defenders causes numerous issues. While the defensive metrics at our fingertips like Defensive Runs Saved, Ultimate Zone Rating, and Fielding Runs Above Average outpace the metrics of the past like fielding percentage, accurately turning defense into a number has inherent problems. Maybe FIELDF/X will fill in the holes, but for now, at least as far as the general baseball public goes, we have to rely on a conglomerate of the metrics at our disposal, as well as trained baseball eyes/minds to give us a best guess at a given season's best defender at each position.

I spent this past summer working at Baseball Info Solutions, mining and analyzing data, much of which is and will be used in creating the annual Fielding Bible. The Fielding Bible contains detailed analysis of every player who played defense for an MLB team this season, and every year BIS adds and subtracts information in order to refine their approach. The main defensive statistic the company tallies is Defensive Runs Saved, and it incorporates an abundance of +/- data as well as other data to fix a certain number of runs a given player saved his team with his defense.

At the conclusion of the season, each of the interns, me included, was asked to give a list of which players we deemed their top defenders at each position. As interns, we spent the season scrutinizing hundreds of games, watching for specific actions and motions, but also training our baseball eyes to become more acute and precise. Our lists of top defenders (for MLB, not separated by league) were to make up a small piece of the voting for the SABR equivalent of the Gold Glove Awards: the Fielding Bible Awards.

In a piece that came out yesterday, Matthew Pouliot of NBC Sports, gave his predictions for which player would win each Gold Glove award. He came up with this list:

After perusing this list, I realized that as Gold Glove lists go, this list might actually acknowledge many of the league's best defenders. Here is my list that I submitted as my fraction of a vote for the Fielding Bible Awards. Remember, FBA's are done by MLB, not split into AL and NL. The names in bold are my choices, but the italicized names are my vote for top player in the other league at the given position, had the voting been structured in that manner.

Many of these players match up with the Pouliot's predictions of the eventual GG winners. If one was to ask my fellow interns, I'm sure you'd hear some similar choices, but also some different ones as many positions had numerous possible winners. The most difficult choices for me were at catcher, pitcher, and 1st base, while the easiest ones were third base, shortstop, 2nd base, and right field. I can tell you that when deciding on my selections, I let the numbers involved, both the more obvious DRS, UZR, and FRAA metrics, as well as more detailed +/- info based on direction, and specific fielding plays tabulated influence the top three choices for me at each position. Then I used what I had seen during the season to choose my selection. If I came down to a tie of sorts, I usually utilized the numbers a bit more.

When all is said and done, a majority of GG winners in 2013 will have been deserving of the awards, but certainly a few players will get snubbed. If Andrew McCutchen, wins instead of Carlos Gomez, I'd say Gomez has a legitimate beef, but McCutchen proved no slouch either. At the same time though, if anyone other than Andrelton Simmons receives the NL Gold Glove, it would constitute an act of baseball larceny. While these awards become proof for Hall of Fame votes, and are often used in arbitration hearings, which give them a certain amount of value, my advice is to look at the metrics we have, but also to review the film. Watching players purely for defensive purposes allows a baseball fan to determine the difference between physically gifted players and smart defensive players, as well as a determination on which fielders get luckier than others.

In the end, making a huge fuss about these awards is probably just a lot of bloviating and fans looking for something over which to argue. Make your own decisions on who you deem the best defenders, and see how they match up to the award winners. The Gold Glove awards may not truly award the best defender at each position every time, but they aren't all that awful at it either. Sure Derek Jeter shouldn't have won all those GG's, and Adam Jones winning it constitutes a great joke to tell when amongst an SABR crowd, but the voters, especially going forward will probably get more right than wrong. Still, who's to say exactly who's truly right and wrong when it comes to this mix of subjectivity and objectivity?. . .

Ben Horrow is a writer at Beyond The Box Score and The Good Phight. You can follow him on Twitter at@Summerpastime.