Should Carlos Martinez start in 2014?

Cardinals' pitcher Carlos Martinez has been lights out in a relief role this postseason. Should St. Louis leave him in the pen next year, or are they better off with him taking the ball every fifth day?

Share All sharing options for: Should Carlos Martinez start in 2014?

If you've tuned into either of the first two World Series games, you've had the chance to watch 21-year-old Cardinals' rookie Carlos Martinez pitch. Despite an ERA north of 5.00 during the regular season, Martinez has become the most trusted pitcher in Mike Matheny's bullpen outside of Trevor Rosenthal, evidenced by Game 2 of the series. In the series opener, Martinez threw the bottom of the eighth inning in a game that was already well out hand, but in Thursday's game he entered directly following St. Louis' three-run top of the seventh that gave them a 4-2 advantage. Martinez breezed through two scoreless innings, allowing just a single to David Ortiz and striking out three Sox' hitters before turning it over to Rosenthal to lock down the win. Most interesting was that Martinez even faced Ortiz, as lefty Randy Choate was warm in the bullpen, but still Matheny stuck with the rookie. Asked about it after the game, the Cardinals' skipper had this to say:

It's not an easy decision. Knowing that we have a left-hander up and ready to go. A lot of it has to do with what we see, how the ball is coming out of Carlos's hand at the time. We have two guys on base, one by an error and another by a ball that made its way kinda through the infield. Looked like he had real good life. And if we get through Ortiz, then we have an opportunity to use Carlos's good life right there against a Napoli, where didn't have to bring Trevor in more than one. Not an easy call, but we liked the way Carlos was the throwing the ball at that particular time.

Initially it seems obvious that Choate should be in the game in the spot, but the logic behind sticking with Martinez at least makes some sense. His four-seam fastball and sinker were working as well as ever, averaging 98 and 96 mph respectively and the few breaking balls that he mixed in were devastating. And he kept the ball down. Here you can see the zone profile from the outing: 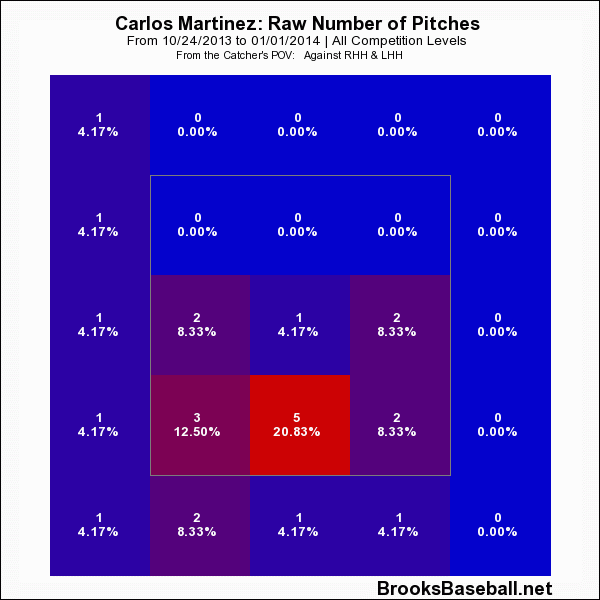 Thanks to location and his power sinker, four of the five balls put in play off of Martinez in Game 2 were hit on the ground, with the fifth an infield pop up by Napoli to end the eighth. His postseason dominance isn't contained just to that game either, with a 2.79 ERA and just five baserunners allowed over 9.2 innings. And even with an ERA of 5.08 in the regular season, his 3.08 FIP is much more indicative of his performance and speaks to the idea that St. Louis has a special pitcher on their hands. The question now becomes what do the Cards do with him next year?

Prior to his promotion to the majors, Martinez appeared in 68 minor league games. 67 as a starter. He excelled in that role, registering a 2.69 ERA and striking out more than a batter per inning with a strikeout to walk ratio of nearly 3:1. In 2013, he finished with a 2.49 ERA in 16 starts, 13 of which came in the hitter-friendly Pacific Coast League. Despite the success, a stout rotation bolstered by the emergence of fellow rookie Michael Wacha enabled the Redbirds to use Martinez nearly exclusively out of the pen, a place that many evaluators felt that he would end up eventually:

Some scouts wonder if his size lends itself to the durability need in a starter -- Baseball America Prospect Handbook, 2012

His long-term role is still up for debate, with the secondary stuff and command to excel as a starter, but with some concerns about his physical stability in a rotation coupled with his elite potential in the bullpen, others think he is destined for the late-innings. -- Baseball Prospectus' Jason Parks, 2013

He's listed at 6-foot, 165 pounds, and his slight frame earns him comparisons to Pedro Martines (who also had a better changeup, for the matter), so the bout of shoulder soreness is less than ideal. If he can show he can stay healthy and effective for 150 innings this year, he'll be back in line to pitch in the top two slots in someone's rotation. If the shoulder issues recurs, he may end up a shutdown reliever with two pitches near the top of the 20-80 scale. -- ESPN's Keith Law, 2013

While he lacks the prototypical size for a frontline starter and he finished the regular season with just 108 innings due to his relief appearances, I look at Martinez and feel that the Cardinals' are best served using him in the rotation in 2014. His frame creates two legitimate concerns for scouts: durability and the ability to get plane and limit home runs. Truthfully, he may never be a 220+ inning workhorse at his size, but the reality is that those pitchers are few and far between. If he can give the Cards' 160-200 quality innings a season, that's still a vast improvement over what he offers them in the pen. As for getting angle and limiting the long ball, he has pitched 365 professional innings and allowed just 15 home runs and his career ground ball rate sits at 52%, a number that has held in the big leagues. Credit that to his power sinker, which is among the hardest in baseball. His sinker, four-seam fastball, and slider give him three plus pitches, and although he basically scrapped his changeup in relief this year (4.45% usage), that's another plus pitch with good separation from his fastball and late fade, giving him a quality arsenal to attack lineups multiple times. 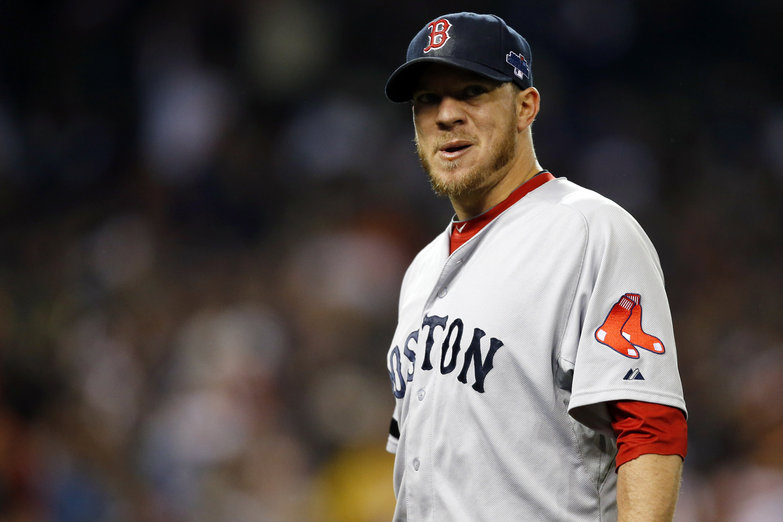 The safe route is to leave Martinez in the bullpen long-term. There's little doubt that Martinez will succeed in that role, and St. Louis has enough starting pitching heading into next year to make the decision quite easy. The riskier choice is to give him Joe Kelly or Lance Lynn's rotation spot and unleash that electric arm on the National League. Recently,St. Louis has converted Adam Wainwright and Shelby Miller from playoff relievers to starting pitchers with very positive results. They also decided to leave Trevor Rosenthal in the pen after his dominant 2012 playoff run. Of course, all three are very different players than Martinez -- Wainwright and MIller are both at least 6-foot-3 and Rosenthal is basically a one-pitch pitcher -- but that shows that St. Louis has not used a cookie-cutter approach in making these moves.

Ultimately, with their track record and knowledge, it's likely that whatever choice the Cardinals make will be in the best interest of the player and their organization. But after watching him this postseason, I know that I for one am rooting to see him in longer stretches for years to come.

All stats courtesy of FanGraphs, Baseball-Reference, and Brooks Baseball.