A preview of the starting pitchers and lineups heading into game three between the Red Sox and Cardinals.

Share All sharing options for: Game three in St. Louis

The World Series currently stands tied at one game apiece. The Red Sox clobbered the Cardinals in game one, putting the game out of reach in the first two thirds of the game. In game two, neither team dominated the game, but combining some questionable defense on Boston's part with some solid base running out of the Cardinals, the Redbirds won the game to tie up the series.

After a few days spent in cold Boston, MA, practicing playing balls off of the green monster, and listening to the crowd 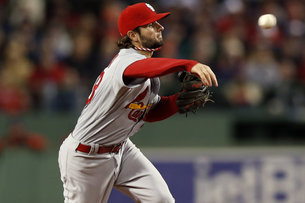 Randy looks at the Cardinals from a defensive angle

chant the same Bob Marley line, Busch Stadium becomes the venue for games three through five. According to the forecast, the weather in St. Louis should be both clear and chilly with lows in the mid to low 40's expected for the next few games. Looking at the stadium factors for Busch Stadium in both 2012 and 2013, we see that it hasn't been a mecca of runs, and doesn't have any quirks that give a higher propensity for certain types of hits over others. Between the cold weather and the low rate of runs scored at Busch, the three games spent in St. Louis might prove to be low scoring pitchers duels.

In game one we saw Jon Lester dominate Cardinals hitters, most of whom bat from the right side, using a nice combination of cutters and four-seam fastballs, mixing in a few curveballs to keep the hitters honest. Cardinals' game two starter Michael Wacha, went with his usual steady diet of fastballs and changeups. In game three, the Cardinals will send Joe Kelly to the hill, while the Red Sox roll out mid-season acquisition and well-known mound yeller Jake Peavy.

Kelly, like his rotation mate Michael Wacha, tends to predominantly utilize his fastball no matter the count or the handedness of the hitter. While the Red Sox haven't started Mike Carp yet in the series, and have had Daniel Nava play thus far only as a pinch-hitter, during the regular season, both Carp and Nava scalded the ball against right-handed pitching to the tune of 144 and 146 wRC+ numbers, respectively. The Cardinals have no left-handed starting pitchers, but John Farrell continues to insert Jonny Gomes into the lineup ahead of Nava.

During the regular season, Kelly, actually posted better numbers against left-handed hitters than righties. His 3.86 FIP against LHBs comes directly from a higher K% due to his nasty changeup. Not only the changeup, but as Jeff Sullivan of Fangraphs wrote earlier, Kelly throws a two-seam sinking fastball that gets good movement, and when commanded well, can cause lefties, and especially righties (53.8% GB percentage) to ground out.

While Kelly's changeup/sinker combination works well enough when facing left-handed hitters, he works in a cutter than tends to get swings and misses and curveball against right-handed hitters. The key for Kelly against the righty hitters of the Red Sox will be to keep the ball in the park, and from his regular season statistics, it seems that as long as he stays away from throwing his changeup to righties, he should limit home runs. Given that right-handed hitters tend to hit the ball on the ground more often against Kelly anyway, the focus will shift to the Cardinals coaching staff and Yadier Molina, who combined will call the pitches for Kelly.

Overall, the Red Sox have the hitters, platoon-wise, to capitalize on Joe Kelly, but as with all games of baseball, the key will be to get runners on base. Given Kelly's 8.3 BB% in 2013, the Sox hitters should be patient at the plate, and look for the sinker early in at bats.

Just like every other pitcher to face the St. Louis Cardinals this season, Jake Peavy will see lots of right-handed hitters, save for Matt Carpenter, Matt Adams, and switch-hitting Carlos Beltran. Without the designated hitter in effect, the Cardinals will need to make a decision as to whether Allen Craig can play the field, but most likely, Adams will man first base.

Here's a look at how the Cardinals fared against right-handed pitchers during the regular season:

Overall the numbers look very good, much like how the Red Sox hit against righties. Jake Peavy, against righties, tends to use his four-seamer and cutter, mixing in some sliders as well. Only against left-handed hitters does he bust out the changeup and curveball. In his career, Peavy has never pitched to contact, posting low groundball rates, relying more on his command to induce outs. In recent seasons, Peavy has seen his fly ball rates jump a bit, causing higher rates of home runs, so limiting his walks will prove crucial when facing the Cardinals, who tend to put the ball in play more.

Keeping the ball down in the zone should help Peavy's case for giving up fewer home runs as his ISO against numbers only spike a bit on pitches up in zone. 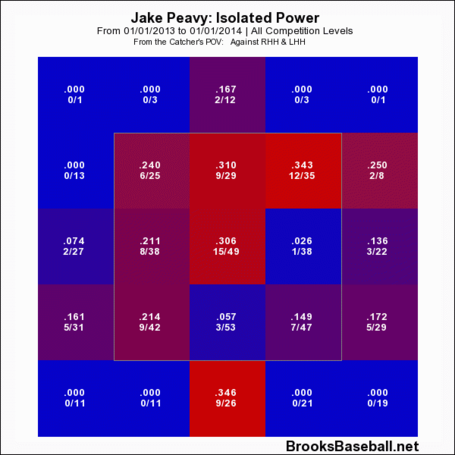 A hung cutter or curveball combined with some sloppy command could lead to some issues for Peavy, but if he stays away from those two outcomes, game three could prove to be a low scoring affair, similar to game two.

With the day off yesterday, both bullpens should have rested arms, so while both teams could use at least five innings from their respective starters, the key to the middle third of the game for both teams will be when managers Mike Metheny and John Farrell choose to pull Peavy and Kelly.

Mike Matheny has chronically left his starters in too long this postseason. Just cost him.

Both Peavy and Kelly put up decent numbers when facing opposing hitters the second and third times through the order, but given that matchups can become vital, especially with runners on base, the onus comes upon the managers to know when to remove the starters in lieu of bullpen help.

All statistics courtesy of BrooksBaseball, Fangraphs, Baseball Prospectus, and Baseball-Reference.