While the Red Sox and Cardinals have reached the World Series on the backs of two dominant bullpens, the teams' relievers attack opposing hitters and generate outs very differently from one another.

Share All sharing options for: Dominating Differently: On Boston and St. Louis’ bullpens

One of the more compelling and significant storylines surrounding this year’s World Series involves the opposing relief corps for Boston and St. Louis. Both teams’ bullpens have been essential and near unhittable during their respective postseason runs, but the way in which each group goes about attacking opposing hitters could hardly be any different.

The contrast is obvious when one simply compares the blunt force of a Trevor Rosenthal fastball to the calculated deception of Koji Uehara’s splitter, and these types of disparities exist up and down each team’s bullpen. While the Cardinals depend on a bevy of young arms who can light up the radar gun, the Red Sox bullpen is characterized by a group of relievers who barely top 90 mph and instead succeed through much more subtle means.

Although Uehara racked up 101 strikeouts in 74.1 innings this season, his average fastballs (89.0 mph) clock in at roughly nine miles per hour slower than Rosenthal’s, whose fastball averaged 98.2 mph in 2013, ranking fourth-highest in the majors. Furthermore, Rosenthal’s changeup (which, to be fair, he throws just 11.4% of the time) is about the same speed as Uehara’s fastball, further underlining the velocity disparity between the two closers.

A look at their respective zone charts also demonstrates the differences in Uehara and Rosenthal’s approaches: 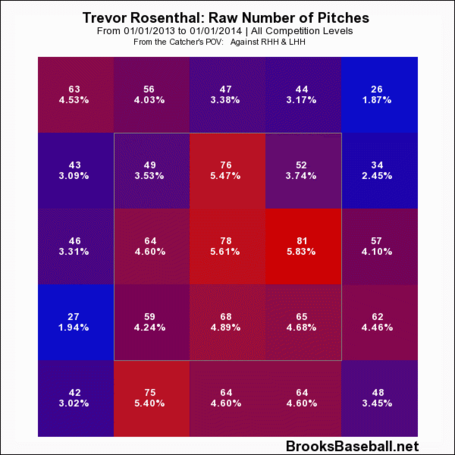 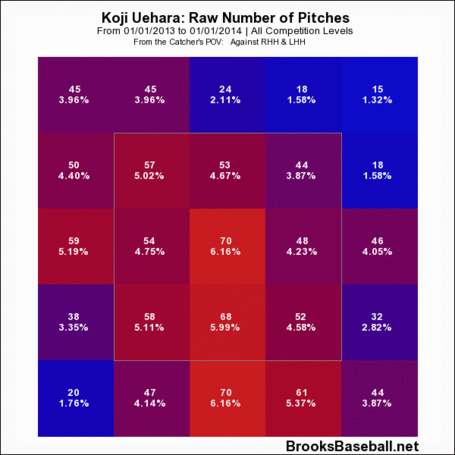 Given his elite velocity, it is clear Rosenthal is unafraid to attack opposing hitters above the belt and even in the strike zone. He is aggressive with his fastball, often challenging batters to catch up with his heater, and as a result, the 23-year-old is much less focused on locating than simply relying on his fastball from pitch-to-pitch, even if this strategy becomes predictable. Moreover, Rosenthal’s reliance on his four-seamer has only intensified in the playoffs, as the Cardinals hurler threw just one pitch (a changeup) other than his fastball over his last three appearances in the NLCS.

As can be seen in his zone chart, Uehara is far more dependent upon keeping the ball down and towards the outer portion of the strike zone. This is partially because he lacks the raw velocity of Rosenthal, but it also plays into the deception he creates with his splitter. Uehara’s fastball-splitter combo is so effective because the two pitches look almost exactly identical to opposing hitters before reaching the plate. All too often batters will swing at an Uehara splitter that has dipped below or out of the strike zone, as he throws his two most prominent offerings to similar locations around the plate.

Of course, Rosenthal and Uehara aren’t the only relievers for Boston and St. Louis, even if they aptly encompass the contrast between the two units. Carlos Martinez, John Axford, and Kevin Siegrist all pump their fastballs into the mid-90s, relying on their superior velocity to get hitters out.

Much like Uehara, Craig Breslow hardly throws above 90 mph (his fastball averaged 91.3 mph in 2013), relying instead on the movement from his cutter and sinker to generate weak contact and keep the ball on the ground. Junichi Tazawa is one of the harder throwers in Boston’s bullpen, but even his success is predicated more on a fastball with strong arm-side run that he locates well.

Given the recent increase in velocity among major league pitchers, the Cardinals bullpen is indicative of what most teams now possess—relievers who challenge hitters with plus fastballs in the late innings. Ironically, Edward Mujica, the one St. Louis reliever who depends upon location and deception over velocity, has been highly ineffective down the stretch.

Red Sox relievers, on the other hand, are atypical from what we have come to expect in a major league bullpen. They don’t have overwhelming "stuff" (even if Uehara’s strikeout rate was higher than Rosenthal’s this season), but rather keep runs off the board by limiting walks, base runners, and hard contact.

Regardless of these disparities, both bullpens will be front and center during the World Series. Given how effective Boston’s relief corps was when compared to Detroit’s in the ACLS, whichever bullpen performs better during the Fall Classic may just prove to be the difference-making factor.

But for both bullpens, the importance will ultimately lay in simply getting outs, one way or the other.

Alex Skillin is a Staff Writer at Beyond The Box Score and a Staff Editor for SoxProspects.com. He writers, mostly about baseball and basketball, at a few other places across the Internet. You can follow him on Twitter @AlexSkillin.