John Lackey: Back from the dead

Not too long ago, John Lackey was nothing more than a punchline in the Boston sports world. Tomorrow night, he'll take the mound in Fenway Park to begin Game 2 of the Fall Classic. How did that happen?

Share All sharing options for: John Lackey: Back from the dead

Later tonight, the Boston Red Sox will host the St. Louis Cardinals in the first game of the 2013 World Series. Based on how the season played out, the matchup isn't surprising in the least bit. Yet, just six months ago, the Red Sox were a long shot to finish over .500, let alone play for their third title in the ten years. The 2012 club managed its worst season in two decades and oodsmakers had them as 30-1 favorites to win the World Series entering the year, well behind the likes of the Nationals (7-1), Blue Jays (8-1), Angels (9-1), and the Giants (12-1). In fact, the eventual American League East champs were picked to finish last in the division by Vegas and most media outlets.

The one-year turnaround has been nothing short of remarkable, and certainly there were many astute moves, and a lot of luck that made this possible. It all started with last year's franchise-altering Adrian Gonzalez to the Dodgers mega-deal, but the success of this team is also largely due to key offseason acquisitions Shane Victorino, Koji Uehara, Mike Napoli, and Jonny Gomes, plus the emergence of players like Daniel Nava and Junichi Tazawa. In the playoffs, the combination of miscues by Tampa Bay and Detroit and a really strong bullpen (Uehara, Tazawa, and Craig Breslow specifically) performance has carried them to the World Series. Well, that and two of the biggest grand slams in postseason history.

Amidst all of the amazing things that have occurred to make Boston's run to the pennant possible, I think one clearly stands out above the rest. And truthfully, I had sort of forgotten just how amazing it was until Grant Brisbee pointed it out in his article last week:

We've all sorta accepted that John Lackey is good again. He signed a big deal before the 2010 season, and he was disappointing. He came back in 2011 and was the worst pitcher in baseball. Turned out he was broken, and he missed 2012. That means we're three seasons removed from anything resembling the one-time All Star who got a five-year, $82.5 million contract. Pitchers like Lackey slowly fade away after they get hurt in their 30s. Remember Larry Gura? Exactly.

But Lackey's good again, even though we didn't expect to see him again. On Tuesday, he dominated a tough Tigers lineup for more than six innings, helping the Red Sox to a 1-0 victory in Game 3 of the ALCS.

It's expected. Oh, yeah, John Lackey, he had a pretty good year, you might say. No one questions it. He made the transformation from chicken-'n'-beer punchline to reliable starter. When did that happen? May? June? It's still weird.

Grant nailed it - I, at least, have sort of accepted that Lackey is good once again, and good enough that it makes perfect sense that he is the Game 2 starter for the Red Sox in the World Series. Which of course begs the question, how the heck did we get to that point?

Backing up all the way to the beginning, it's easy to forget just how good the first rendition of John Lackey was. The Texas native debuted in 2002 as a 23-year-old with 18 regular season starts for the Angels, before really bursting onto the scene with an impressive playoff performance (2.42 ERA in 22.1 IP), capped off by five innings of one-run ball and the victory in Game 7 of the World Series. For the next five seasons, Lackey was quite possibly the most durable pitcher in the major leagues, racking up at least 198 innings pitched and making 32 starts each year. Not just durable, he also was one of the most effective starting pitchers as well. From 2005-2007, Lackey was 46-25 with a 3.33 ERA and a 3.34 FIP, and his 16.7 fWAR was third most among pitchers and tied with Miguel Cabrera for the tenth highest total among all players. Over his final two seasons in LA, Lackey did miss some time with injuries and subsequently his performance took a hit. Still, despite the injuries he managed an ERA under 4.00 in 339.2 innings.

After the 2009 season, John Lackey hit free agency as the premier starting pitcher on the market, and it wasn't particularly close with the next best options including Randy Wolf, Jason Marquis, and Joel Pinero. Previewing the starting pitching landscape, Baseball Prospectus' Eric Seidman said, "Lackey stands alone as the best of the best, a relatively young righty who carries significantly less risk than the other-high upside hurlers." Boston signed him to a five-year, $82 million contract, and although the deal has been perceived as somewhat of an atrocity, it wasn't considered that at the time.

As Grant stated, the general perception is that Lackey's Boston debut in 2010 was a disappointment. Lackey did throw 215 innings with a 3.85 FIP making worth nearly four wins above replacement, but at no point did he look like the ace that took the mound so many times for the Halos. The following year Lackey was in fact the worst pitcher in the big leagues, finishing the year with a 6.41 ERA, a mark that was nearly a run and a half higher than any other pitcher that threw at least 160 innings in 2011. When it was revealed he had elbow problems that would require Tommy John surgery and keep him off the mound for all of 2012, many thought that we had seen the last of John Lackey. 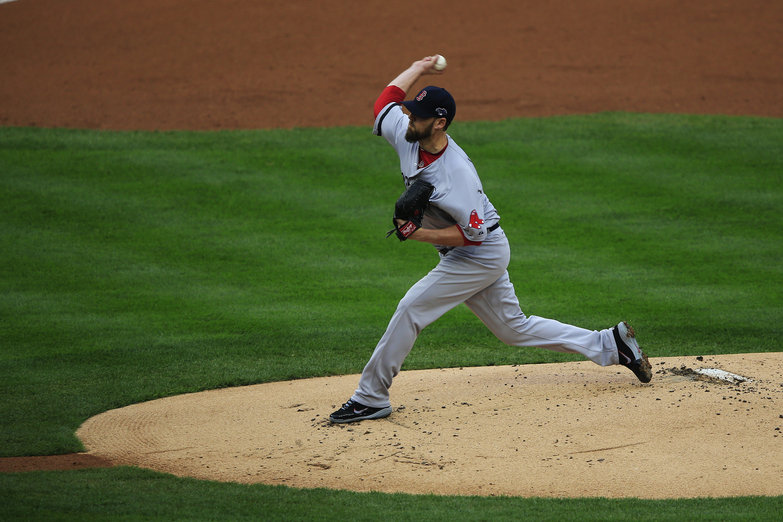 But then a funny thing happened. Lackey showed up to spring training 12-15 pounds lighter than he had been previously, and reports came that he looked great. His spring numbers (5.40 ERA, 5 strikeouts, 3 walks in 11.2 innings) didn't reflect that notion, but everything from Red Sox' camp regarding Lackey was super positive. In his first start of the season, Lackey allowed two earned runs and struck out eight batters in 4.1 innings in Toronto. In his next start, he allowed just one run in six innings against the Astros. It was a fun story that skinny John Lackey was pitching well, but it wouldn't be sustainable. With each passing start, however, the fact that Lackey was back became more and more real. His ERA at the end of May was 2.95. By the All-Star break it was 2.78, and even after a challenging final month of the season he finished 2013 with a 3.52 ERA, 3.86 FIP, and a 3.49 xFIP.

The story is amazing, without a doubt, but you may have noticed that I've done very little to answer initial question: how did John Lackey become a reliable starter again?

The first thing that stands out about Lackey's 2013 season is his walk and strikeout rates. This year, Lackey struck out 20.7% of the batters he faced while walking just 5.1% of opposing batters. The strikeout rate is his highest since 2006 and the second best of his career, and the walk rate was the 13th best among the 81 qualified starters, as well as his best figure ever. What led to those rates was an impressive knack for inducing more swings, and swings and misses, than in years past. Here you can see the difference from his first two years in Boston to the current season:

Further investigation shows that his stuff remained the same, with his FB velocity of 92.37 mph nearly identical to the 92.36 average he had during 2010 and 2011, and movement on his pitches stayed consistent. His usage, though, did change significantly. Prior to this season, Lackey utilized two breaking pitches, a slider and a curve, fairly evenly, but this year he went to the slider 30% of the time and the curve on just 10% of his offerings. According to FanGraphs' pitch weights, even in his disastrous 2011 season, Lackey's slider was still worth 4.7 runs above average, so the increase makes sense. Best of all, even with increased usage, the pitch remained just as effective (4.8 wSL). Below you can look at the difference between his 2010-11 slider usage and whiff percentages versus those of the current year. 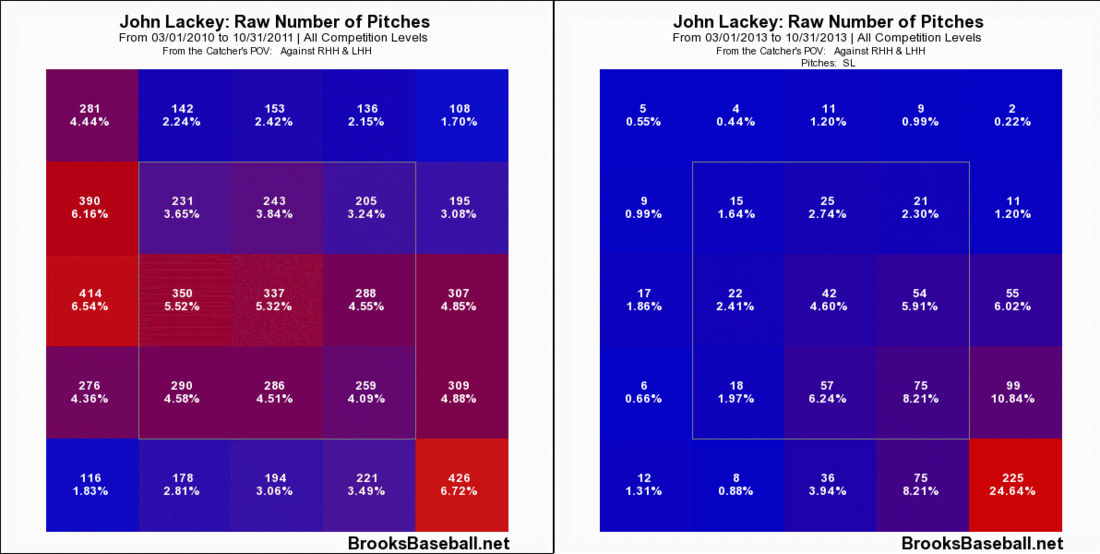 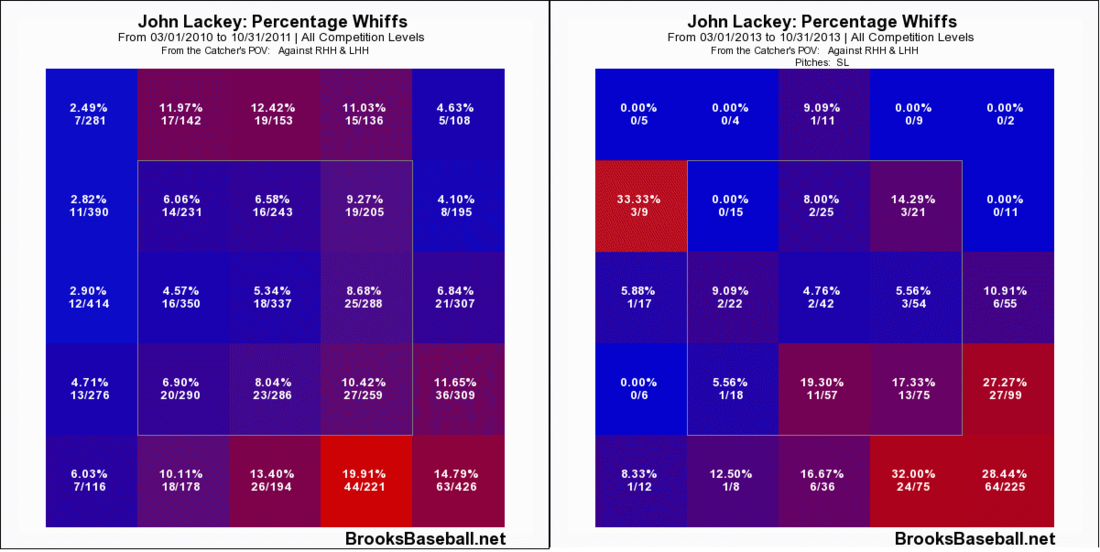 You can see from the tables that Lackey is commanding the pitch better than ever, burying it to the bottom, glove-side part of the plate. In turn that command has led to more swings and misses with the pitch, a big part of his improved strikeout rate, and the decrease in his walks. In short, his success this year is fully explainable, and I wouldn't be surprised in the least to see him have a very strong season again next year.

No World Series winner can claim their ultimate prize without a bit of luck, that's simply the nature of the game. And if you look at the Cardinals, or any playoff team for that matter, you'll see plenty of good fortune that has led to their success. John Lackey's contribution to the Red Sox, however, surpasses the typical playoff narrative -- the worst starter in the major leagues just two short years ago has turned himself back into the semi-ace that he was in his prime at 34-years-old. And thanks to a nifty clause in his contract, Boston still may end up getting value out of a an $82 million deal that recently looked to be a sunk cost.

In January the thought that John Lackey would take the mound in Game 2 of the World Series for Boston was about as far-fetched as they come. Tomorrow night that far-fetched thought will become a reality, and more amazingly, the entirety of Red Sox Nation feels good about the decision. To start John Lackey. At pitcher. In a World Series game. Go figure.

All stats courtesy of FanGraphs, Baseball-Reference, and Brooks Baseball.