The Giants have agreed to a 2 year, $35 million deal with a full no trade clause for former ace Tim Lincecum. The deal is a clear sign of loyalty from the side of the Giants, yet the contract does very little to help the Giants on the surface.

According to CBS' Jon Heyman, the Giants have agreed to a contract extension with former ace Tim Lincecum. The contract--like most others--is currently pending Lincecum passing a physical examination, but based on the size of the contract there is little reason to believe that Lincecum will fail his test. If the deal stands, it will grant Lincecum three things:

At $17.5 million AAV, the deal comes only $5 million short of the contract Tim Lincecum received for the 2011 and 2012 seasons. This is quite a surprise given that the AAV--even with inflation in the market and the value of the U.S. dollar--is high for someone of Tim Lincecum's talent level.

Who is Tim Lincecum?

This is a fair question with two relevant sides to the answer. In the eyes of the fans in San Francisco, Lincecum is a hero and franchise icon whose presence on the team had always been directly tied to success. After two World Series championships and two Cy Young awards, it's hard to blame the fans for their adoration of Lincecum. In the eyes of baseball analysis, Lincecum falls in line with what would be considered a below-average pitcher. 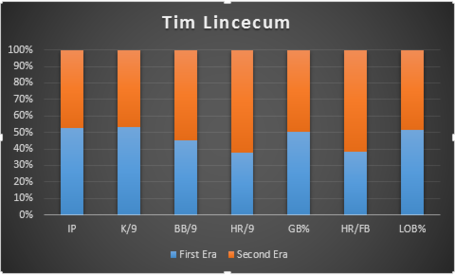 Looking at the graph, one might honestly consider the fact that these are two completely different pitchers. One is an innings-eating strikeout machine with strong command of his pitches. He induces many ground balls and doesn't give up home runs. The other is an erratic individual who struggles to limit hard contact but still manages to strike out his fair share of batters--when paired with the innings, it's a sign that he's got good stuff but can't seem to manage his control. Obviously these are not two different pitchers, but they are completely different profiles.

A large portion of this is likely related to the fact that he's lost two MPH on his fastball over the past two years as compared to the years before then. An interesting note here is the difference in Lincecum's release points over time. In 2009, Lincecum released the ball closer to his head. In 2012, Lincecum drifted nearly a full foot away from his head on the other side, while he moved back in 2013 to what he was doing in 2009. In all three cases, the vertical height above the ground remained the same, which suggests a big difference in his mechanics all three years.

While it's easy to point to mechanical change in terms of differences in velocity, Lincecum's fastball velocity did not bounce back--in fact, it remained nearly the same between 2012 and 2013 (90.4 to 90.2 MPH). This suggests that the change in Lincecum's mechanics did not help his velocity, though the improvement of 2% in his BB% suggests that it did help his control.

With evidence of mechanical differences in Lincecum's approach to pitching, it stands to reason that 2013 Lincecum is the Lincecum that we should expect to see. Unfortunately for the Giants, this version is not worth the $17.5 million AAV he is going to be paid. According to the win value study done by our own Lewie Pollis, Lincecum's win value would be worth closer to $11 million dollars--perhaps slightly less given the amount of relative risk.

Paying for the Past

With Lincecum's on-field performance being worth nearly $6.5 million less than he is scheduled to be paid, other reasons for paying him must exist. As mentioned before, Lincecum carries some incalculable value to the Giants fan base, which is a likely reason for the apparent over payment and even the full no-trade clause. If this is the thinking behind signing Lincecum, the thinking is fallacious for multiple reasons.

Firstly, the deal assumes that Lincecum does indeed carry that additional value--and based on the numbers, it adds up to about $7 million per year in the minds of the Giants' front office. It is strongly suggested--perhaps proven--that winning is what drives fans to come to games and not the presence of players. It is not proven that individual players can have such an impact. For example, consider the situation of Albert Pujols: in 2011--the final year of his tenure in St. Louis--the team drew 3,093,954 fans while they drew 3,262,109 fans the following year. Coincidentally, the team won the World Series in 2011--but they drew even more fans in 2013. The fans responded strongly to winning and attendance has seemingly not been impacted by Pujols' departure--even though he is a once-in-a-generation talent who is certainly on the path to Cooperstown.

With it being impossible to prove that Lincecum's presence will positively impact attendance, we turn to the merchandise argument. The problem with this thinking is that merchandise sales are poured into the league's revenue sharing system--meaning the Giants only get a cut of the profit. Without the backing of attendance change, the difference in value would have to come from merchandise sales--something that has no chance of adding up to nearly $7 million.

The last argument for signing Lincecum to this deal centers around a suggested lack of other options. Anyone who perceives this as being real is simply off base. Consider the following table: 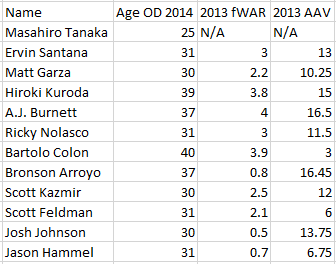 Considering Lincecum is going to be 29 on Opending Day next year and produced 1.9 fWAR, it's really questionable as to why the Giants signed this deal. The market clearly is not barren, and there are actually several decent short-term options. If the Giants did not want to pursue a pitcher looking for a long-term deal, then they could be attracted to pitchers like A.J. Burnett, Ricky Nolasco, Bartolo Colon, Scott Kazmir, or even Scott Feldman. While not carrying the same kind of past Tim Lincecum has, these pitchers all performed better than Lincecum in 2013--arguably and for reasons beyond fWAR--and none of them are looking at AAV figures anywhere near $17.5 million and a full no-trade clause.

This deal comes across as a reward for past accomplishments. Due to the lack of evidence in players impacting attendance figures and the lack of an ability to turn to merchandise revenue, it is hard to argue that the payment to Lincecum above and beyond his performance on the field is justifiable. While the cost of a no-trade clause is up in the air, it adds an additional cost and increases risk to the team handing out the contract. Over the last two years, Lincecum has been a shell of his former self--it's fair to question why the Giants would agree to this contract at all.