The Royals' left fielder has been one of baseball's most unheralded stars over the last three seasons, but when his performance dropped off in 2013, something funny happened: his platoon split changed directions.

Perhaps it's because he plays in Kansas City or because he does everything well and nothing extremely well, but Alex Gordon is often overlooked. It might be because he was a can't miss prospect who took a long time to put it together, but no matter the reason, one thing is clear: Gordon has been one of the best players in the game over the last few seasons. He plays Gold Glove caliber defense, provides value on the bases, and until this year looked like a pretty solid mix of on base skills and power. Gordon's bat dropped off a bit this season, but one of the truly interesting aspects of his game is his fluid platoon split.

The discovery came to me by accident, when posing this question to Beyond The Box Score's Twitter followers on Sunday night:

Out of 140 qualified hitters in 2013, only one had an identical OPS vs RHP and LHP. Guess without looking it up.

If you missed it, the answer was Prince Fielder, but the inquiry led me to discover that Gordon had one of the largest reverse platoon splits this year among qualified hitters, which was something that I found rather surprising. In watching Gordon and the Royals over the last few years, I hadn't noticed anything about his game that suggested he'd have a backward split. In fact, most of the time reverse splits are strange, small sample size fluctuations that vanish in large enough samples. When you dig back in the data on Gordon, you find that the split does in fact vanish, but it vanishes too much. Gordon's platoon splits are all over the map.

Let's first start with Gordon over the last three seasons to get a sense of where he stands overall. From 2011-2013, only 11 position players posted a higher fWAR than Gordon's 15.6 and he's done it with a very balanced game.

On the surface, Gordon's drop in offensive production is interesting, but when you dig deeper looking for a cause, the platoon situation pops up. 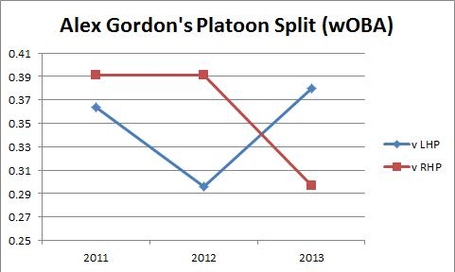 For the first two years of the great portion of Gordon's career, he had a pretty standard platoon split and hit right-handed pitching better. This year, it flipped and left him with one of the biggest reverse splits in the game. The question now is what's behind it?

Let's take a quick look at Gordon against different types of pitches, starting with 2011-2012 and 2013 against RHP and then LHP via Brooks Baseball.

If you look between the images you'll notice his production fell off a great deal against breaking balls and offspeed pitches versus RHP and LHP but his numbers perked up against fastballs versus LHP while falling off slightly against RHP. Pitchers threw a few more breaking balls and offspeed pitches to Gordon in 2013 than before, but the numbers don't jump off the page.

It's hard to litigate the question. Gordon's offense had been trending down the last couple of seasons and his platoon split has changed direction. The question isn't why Gordon got worse, the question is why he got worse against righties and not against lefties when you would expect it to be the other way around based on general theories of baseball and his own personal history. The long run averages probably tell a more accurate story, but it's still worth considering going forward into the 2014 season.

You would expect a player to have trouble against opposite side pitchers if the player struggled with changeups, but that only explains half of the problem. If Gordon all of a sudden couldn't hit righties we might point to his struggles against that pitch and call it a day. But he's also simultaneously getting better against lefties without improving against breaking balls, which would be the pitch most likely to give him trouble.

His numbers are better in every way against left-handed fastballs and it isn't just a fluky BABIP type spike (although his BABIP there is up), because stats like well-hit average back up the fact that he's making better contact and hitting more homeruns. The final piece of evidence I'll present might tell us something about what's really going on. Gordon is pulling the ball more often and it's been detrimental to his game except when it comes to fastballs from lefties. 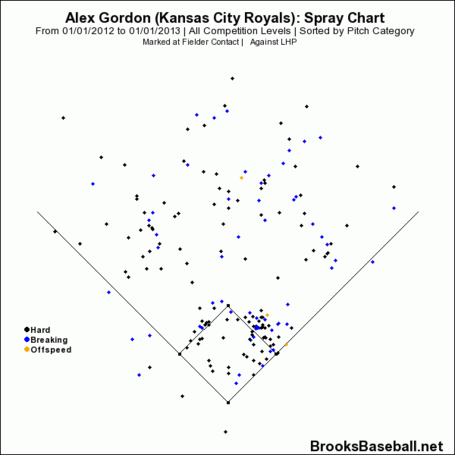 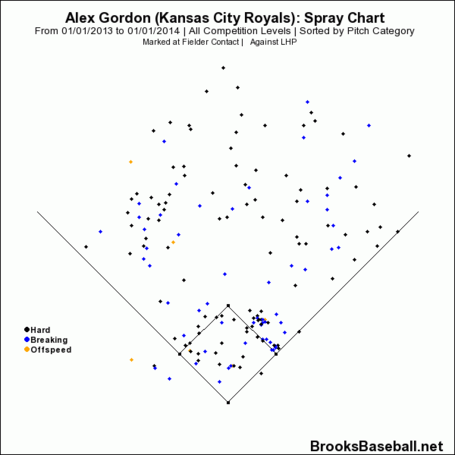 I wish I had a better answer as to why this is happening, but it's interesting enough to demonstrate what's going on. Gordon's platoon split took a strange turn in 2013 when an overall drop in production mixed with a specific improvement against one type of pitch against one type of pitcher. The odds are probably on the side of regression to the mean for 2014, but this is an issue the Royals should be watching. It's not entirely surprising that Alex Gordon's numbers are trending south as he ages, but the manner in which that's happening is a bit unusual.

As players and teams start to think about adjustments to make in the offseason, figuring out how to get Gordon back to pre-2013 levels should be a top priority for a Royals team desperately in need of a playoff run.