The 2013-2014 offseason projects as a fascinating one, but will the offseason be full of free agent deals, or could some possible trades involving big names make the biggest headlines?

Trades in baseball are rare. Every offseason we see a few trades, some more minor, and others of the more grandiose nature. Yes, MLB has a designed midseason trade deadline, and while we see more trades occurring at this time than any other time in the course of a season, even prior to the trade deadline, putting together deals proves difficult. As fans we often enjoy contemplating hypothetical trades, but rarely do these deals, usually unrealistic and sometimes realistic, come to fruition in real life. Most importantly, while trades between two teams prove arduous to complete, adding a third team usually complicates the waters.

On dealing Scherzer and the cost of a win 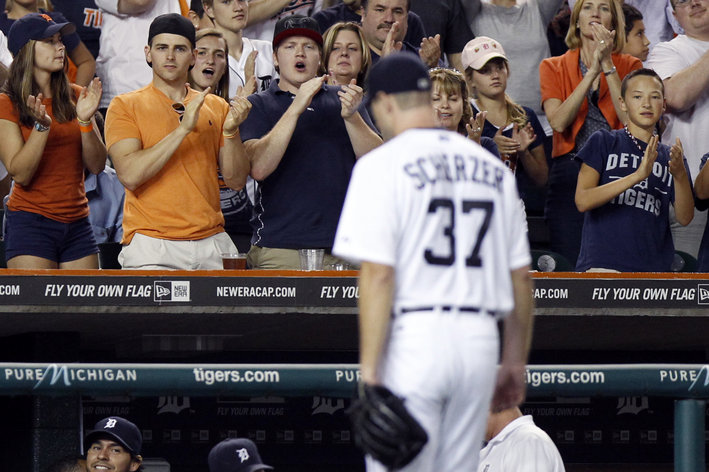 That being said, after reading a recent piece by Matt Klaassen of Fangraphs, I began thinking of the possibility of the Reds moving second baseman Brandon Phillips. Phillips has about $50 million left on his current contract. He plays consistent above average defense, despite having experienced a less than desirable 2013 at the plate. From 2009 to 2012, Phillips posted wRC+ numbers of at least 100, and throughout his career he has posted a UZR/150 of 8.4 and a total DRS of 50. Especially since he plays a premium position, even if Phillips' numbers remain positive defensively and about league average at the plate, his contract has value.

"This is not to say the Reds would not have a taker, or that they would have to eat most of the contract. Teams need players, second base is not terribly deep, and contenders with money and a hole at second (the reader can make her or his own list) might feel it is worth the investment. They might not give the Reds much back, but if the Reds feel they can fill second for less money, it might be worth it to move the contract and use the money for something else. Yes, Phillips had a down year, but he is still a very useful player, and the contract isn't an albatross."

Given the inherent difficulties in finding a suitor, but also the difficulty in getting a solid return, if the Reds truly want to move Phillips, a three-way trade may prove most suitable.

After noticing a piece discussing the pros and cons of a trade involving Brandon Phillips, I began to think of a team that might try to capitalize on such a deal. The New York Yankees, long thought to mark a hard push to resign second baseman Robinson Cano, came to mind. In September, numerous news outlets reported that Cano and his agency would pursue a new contract ten years in length and for over $300 million. Such a declaration from the Cano camp comes as no surprise because setting the bar high and then negotiating down to a more reasonable, but still incredibly lucrative contract would suit this offseason's top free agent.

Cano has been remarkably consistent in posting great hitting numbers, combined with solid defensive numbers, for a Yankees team that has needed his bat after numerous hitters succumbed to injuries. Add in the fact that he plays a premium defensive position in the field, and Cano should command serious money. Still, the Yankees have recently been quite averse to going after expensive free agents in an attempt to keep the team under the daunting luxury tax. Some have speculated that the team has also spent less money in recent years in order to resign Cano.

Nonetheless, while the Yankees will need hitting going into the 2014 seasons, especially with Alex Rodriguez set to serve a full-season suspension. This past season, the Yankees, with relatively little hitting other than Cano, used pitching and defense to guide themselves to a winning record. With the likely departures of Curtis Granderson and Phil Hughes, combined with the retirements of both Andy Pettitte and Mariano Rivera, the Yankees should have some cash to throw around. But, does the team want to use most of that money on one player, or does the strategy employed recently by their rivals, the Boston Red Sox seem more enticing?

Let's assume, for the sake of this trade scenario that the Yankees decide not to bid big on Cano, and essentially take their name out of the running for his services. If so, the Yankees not only have money to spend on a free agent market with some decent outfielders, but now they have a whole to fill at second base. Enter Reds second baseman Brandon Phillips.

Moving further south, we arrive in Tampa Bay. Last year the Rays, knowing that resigning ace James Shields would most likely never happen given their comparably miniscule payroll, traded the righty to Kansas City in exchange for young outfielder Wil Myers. The trade worked out fairly well for both teams, but with Myers under team control at a low price for more years than Shields, over the long run, we can expect the Rays to "win" the trade.

This offseason, the Rays face a similar situation with left-handed starter David Price. Price made just over $10 million this past season, the most lucrative salary given to any Ray in 2014. With two years of arbitration coming in 2014 and 2015, Price won't reach free agency until the 2016 season. Usually this would imply that reasonable one-year contracts that the Rays could afford, but with Price's recent numbers, awesome talent, and the recent goings on in arbitration, it's quite possible that Price salary could jump at the same time as Evan Longoria's big contract is set to kick in.

In no way do these circumstances imply that the Rays have to or should trade Price, as any contract he receives of $15 million or less for one season would most likely work out well for the team as Price has consistently been worth at least four wins per season. Nonetheless, finding a trade for Price now could bring back some great young talent that might not be available next offseason. As an added caveat, young righty Chris Archer looks prime to take over Price's possibly vacated starting role.

So, we have three teams, all with incentives to make a deal, and possibly with the personnel to make a trade work. Here is how I envision the three-way trade working out:

Just to review, the Yankees receive a replacement at second base after not signing Robinson Cano as well as a veteran outfielder and in exchange they gave up their top outfield prospect in Mason Williams who reached double-A this season. The Yankees have some depth in their farm system at the outfield position, and while Williams could become a great talent, the team will have retained top prospect Tony Sanchez, and found suitable, reasonably priced veteran players for their soon-to-be depleted MLB roster. If Cano ends up receiving $250+ million dollars on the open market, this trade would provide the Yankees with a second baseman who plays better defense. The Yankees would be gambling on Phillips' offensive skills returning to the 100+ wRC+ numbers he recently put up, but they would be paying a fraction of the cost it would take to reacquire Cano, freeing up room to go after other players to fill their numerous vacancies.

The Reds, who according to Klaassen's article have had interest in a Cuban 2B named Alexander Guerrero, would have added an immense piece to their team in David Price who, added to Homer Bailey and Mat Latos, could make up a better three-headed monster than any other team in the NL Central. More importantly, the Reds should have the money to sign Price to an extension if he and the team both come to an agreement. The key here for the Reds though is the loss of Tony Cingrani, but a rotation of Price, Latos, Bailey, Leake, and Johnny Cueto could prove unstoppable.

Finally, the Rays will take the biggest immediate loss, but the team will have added a top outfield prospect who could eventually take over for Desmond Jennings. For the present, the Rays will have added solid depth to a starting rotation that will include Matt Moore, Alex Cobb, Chris Archer, Jeremy Hellickson, Cingrani, and possibly Jake Odorizzi. This wouldn't constitute a windfall for the Rays, and in the past the front office in Tampa has succeeded in making deals with overall better returns, but acquiring a top outfield prospect, an MLB ready left-handed starting pitcher, and some salary to spend after not resigning Price, isn't bad.

While anyone can find holes in aspects of this deal, the same proves true of almost any trade made in baseball. Maybe the Rays value the prospects of the other two trade partners differently than independent talent evaluators, me included. The Yankees might see this deal as one in which they receive too little, and the Reds, while getting the best deal here, might see Cingrani as a cheaper option, and Price as an unnecessary cost. More importantly, the idea that the Yankees and Rays would make a deal, even within the confines of a three-way trade, seems somewhat unlikely as the two both reside in the American League East.

Obviously this proposed deal has flaws, but the fact remains that it solves some problems for each of these squads, and does so in a manner that doesn't offend anybody except maybe Robinson Cano. Last season the Reds took part in a different three-way trade, the one in which the team received Shin-Soo Choo. This deal looks to have proved beneficial more so for Cincinnati than the Indians or the Diamondbacks, but it does increase the likelihood that Walt Jocketty would engage in discussions leading to a three-way trade. There's a better chance a deal like this will never come to fruition than it will, but it's creative solutions like these that might become more common given the rising costs of free agents, and the new collective bargaining agreement.

All statistics and information courtesy of Fangraphs, Baseball Prospectus, and Baseball-Reference.