The Chicago White Sox paid a lot of money for new first baseman out of Cuba. What exactly did they get?

Despite a highly contested 4-3 Red Sox victory in the American League Championship Series on Thursday night, the biggest baseball-related news of the day actually came from the south side of Chicago. It was there that it was announced that Cuban defector Jose Abreu agreed to a six-year, $68 million contract to play for the White Sox. According to reports from FOX's Ken Rosenthal, Chicago outbid both Houston and Boston for the first-baseman's services. The price tag is large for any player, but for an international free agent it's the largest deal ever handed out, besting the six-year, $60 million contract the Rangers gave Yu Darvish in 2012. Here you can see the dollar amounts for the top international free agents of the last 15 years.

If you're staring at those numbers and thinking that Dice-K and Darvish cost a lot more money, you're not crazy, you're simply including the posting fees that the Red Sox and Rangers had to pay just to negotiate contracts with those players. The posting fees for both players exceeded $50 million so both clubs actually committed more than $100 million to sign the Japanese pitchers, but the numbers in the chart reflect the portion of that commitment that went to the players. So Abreu's deal is in-fact the largest ever by an international free agent.

Now that we've established that the White Sox gave a huge sum of money to Abreu, two obvious questions need to be answered. How good is he? And what is the impact of the move on the White Sox and the rest of the market?

Starting with the more difficult question, opinions are somewhat mixed on just how good he is and how good he can be. The 26-year-old right-handed hitter is one of the most decorated hitters in the history of Serie Nacional, the top Cuban league. He began his professional career at just 17-years-old, holding his own with a .271 average against much older competition. From there he blossomed into one of the top hitters in the league, or any league for that matter, hitting .399/.555/.822, .453/.597/.986, .394/.542/.837, and .382/.535/.735 in his last four seasons in Cuba. During that stretch, he hit 111 home runs in 254 games and walked nearly twice as often as he struck out. Of course, we need context to correctly gauge those numbers. Unfortunately, league records from Serie Nacional are not easily obtainable, but thanks to Jonah Keri's 2012 article on the slugger (and Clay Davenport) we can attempt to give some context:

Baseball Prospectus co-founder Clay Davenport devised a stat called Equivalent Average (EqA), which takes all of a hitter's contributions (power, on-base ability, etc.), compares those results to league norms, and calibrates them on a scale that mirrors batting average. A .260 EqA is about average, .300 is very good, .350 is fantastic, .400 is astronomical.

But last season's numbers (2010-2011) were the ones that broke the scale. Davenport runs translations for Serie Nacional players, just as he does for Japanese league players, minor leaguers, and others not in the majors. He considers the competition in Serie Nacional to be equivalent to high-A ball in North America's minor leagues - the Carolina, California, and Florida leagues. After comparing a player's performance to the rest of his league, Davenport then must establish how players from that league did when they graduated to higher levels. Once he has a good idea of how players typically change between leagues, he translates an average major league player to Serie Nacional. The Cuban player's translation thus comes from looking at how far above or below the average major leaguer he would be.

Miguel Cabrera was the best hitter in Major League Baseball in 2011. Jose Abreu, even after adjusting his numbers to reflect A-ball competition, blew Cabrera out of the water.

"I don't know that I'd name him the 'best hitter in the world' based on a 60-game performance," said Davenport. "But yes, I'd say there's a chance."

Yikes, that's a bold statement and not nearly as helpful as I had hoped. While I respect and value the work Clay Davenport has done, I am skeptical that Abreu is one of the 20 best hitters in the world, let alone the very best. I could certainly be wrong, but I just don't think any translation system can accurately model the adjustments that are necessary to succeed in the major leagues. In this instance, I much prefer the scouting reports to the numbers when projecting Abreu's future.

Built like David Ortiz, Abreu stands 6-foot-3 and tips the scale at a solid 250 pounds. His biggest asset, and what will need to be his carrying tool, is his power. In BP, and even in the Cuban league games, he utilizes his strength to drive the ball, flashing 70-grade (on the 20-80 scouting scale) power. The question is whether or not he can translate that power to the big leagues. What Davenport's translations don't know is that for a power hitter Abreu's bat speed is just average. In international competitions, his bat speed has left him susceptible to quality velocity on the inner part of the plate, a real concern when Abreu will be facing plus fastballs quite frequently in Chicago. Certainly there's a faction of scouts and evaluators that feel the power will translate, and many of those people think he'll hit for average as well, but that opinion is not a consensus by any means.

I've seen Jose Abreu several times. I do like him. But there are good scouts who wonder if the White Sox are paying $68MM for a 4A player.

Like all young players, Abreu's ceiling at the plate will ultimately be decided by his ability to make adjustments. And his value as a player is almost entirely tired to his bat -- he's a first base only player that is not going to provide value with his legs or his glove.

If your'e like me, you're reading this thinking "Why in the world did the White Sox give $68 million to a bat-only player that might not hit?" The first answer is obvious -- they think he will hit and hit in a big way. Beyond that though, I think there are two reasons the number ended up as large as it did:

While it certainly isn't fair to compare Abreu to Chapman, Cespedes, and Puig simply because they all hail from Cuba, there is no doubt their success drove his price tag up. All three were signed to contracts that initially felt a bit outrageous, yet in hindsight all three look like bargains. Chapman has blossomed into one of the premiere closers in the game, Cespedes has become a middle of the order force for the A's, hitting 49 home runs and racking up 5.2 fWAR over the last two years, and Puig has taken the baseball world by storm, posting a 160 wRC+ and 4.0 fWAR in his rookie campaign. Abreu may never have the core strength of Cespedes, the hand eye coordination, of Puig, or the fastball of Chapman, but the nationality alone was enough to boost his price tag significantly. And if he turns out to be as good as he can be, the next Cuban defector will benefit once again.

Can the White Sox ape the Red Sox? 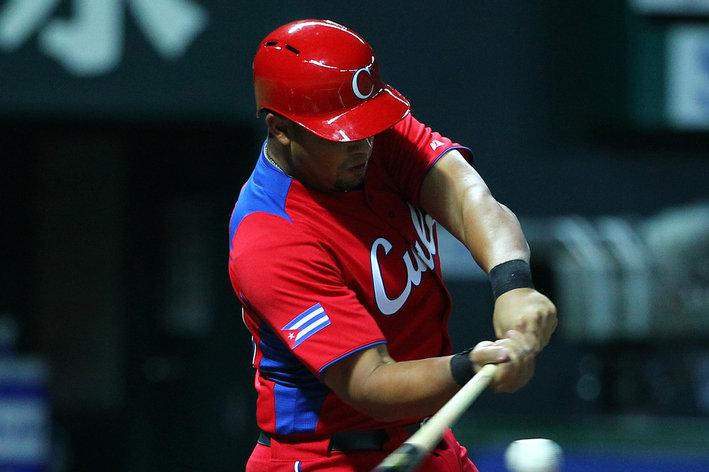 With the signing of Jose Abreu, Grant Brisbee ponders if the White Sox can make a worst-to-first move in 2014.

Looking at the market for free agent hitters, there's not a lot to like out there, especially in the power department. Potential free agents that loosely fit the description of power hitters include Mike Napoli, Michael Morse, Kendrys Morales, Robinson Cano, Brian McCann, Carlos Beltran, Nelson Cruz, and Curtis Granderson.. I think it's likely that Napoli and Beltran are re-signed by their current clubs, and Cano and McCann are the best players on the market at their respective positions. That leaves Morse, Morales, Cruz, and Granderson. And with power down across the big leagues -- home runs have gone down 5.5% in the last ten years -- those players will probably be paid more than they truly deserve.

Last season the White Sox ranked 19th in the league with 148 home runs in 2013 (their lowest team total since 1992) and their .127 isolated power was tied for the fourth worst mark in baseball. Sox' GM Rick Hahn may have looked at the market and determined the 26-year-old was a better risk to fill his team's biggest hole than any of the other available players. The trouble was, it seems as if several teams felt that way which again helped to drive the price up for Abreu. It's unlikely he could have become available at a better time, and it paid off.

Interestingly enough, this move almost all but ensures the end of the line for Paul Konerko. It was reported that Konerko had not made up his mind on returning for one more season or not, but with Adam Dunn under contract still, this move is one to replace the aging slugger. In 2013, Konerko had his worst season in a decade, posting a .298 wOBA and 82 wRC+. That's a pretty low bar for Abreu to clear and the move looks like it could result in a 1-2 win upgrade in 2014. After finishing 30 games out of first in the American League Central, it will take a lot more than that to build the White Sox back into contenders, which in turn makes the contract look better yet again. Abreu is younger than nearly everyone on the free agent market, and he will still be in his prime in 2-3 years when the White Sox are hopefully ready to contend again. This is not a move by a contender looking to add a piece for 2014; this is a move by a team that views Abreu as a piece of their long-term plan.

If, and it's a big if, Abreu can translate even a portion of the success he's had in Cuba to the big leagues, this contract should ultimately be a huge win for the White Sox. Again, I don't put much faith in the translations that say 24-year-old Jose Abreu was better than Miguel Cabrera, but if you continue reading Keri's article you find a rather interesting quote from A's assistant GM David Forst:

Is he Barry Bonds? No. If you do a comprehensive survey of the clubs, they'd say he is not the best hitter on the planet. But, there are legitimate comparisons to Ryan Howard.

Hard as it may be to remember, at the time that quote was given, Howard was coming off of back-to-back 30 home run seasons and he had totaled 262 jacks over his previous six years. That's the upside and for White Sox fans that haven't had much to celebrate lately, that's a dream that's easily worth $68 million.