Most pitchers only carry one quality breaking ball in their arsenal. But Clayton Kershaw has dominated major league hitters for years now with a unique bag of tricks: two devastating breaking pitches.

At this point, it is little secret that Clayton Kershaw is really good at pitching. The lanky left-hander has posted a sub-3.00 FIP in three straight season’s now, and although he benefited from a below average BABIP and above average LOB% in 2013, not much analysis is needed when a starting pitcher records a 1.83 ERA in 236 innings pitched.

But there is something slightly unusual about Kershaw beyond his remarkable ability to throw a baseball so effectively. No, it’s not that quirky windup with the half-pause in the middle that I’m talking about. Rather it’s the dominant curveball and slider combination that Kershaw punishes opposing hitters with. When pitchers are developing in the minors, they usually focus on just one breaking ball to practice and perfect. Given how hard it is to deceive big league hitters, developing two quality breaking pitches that are good enough to get outs consistently in the majors is a rare thing indeed.

And at first, Kershaw was no different, as he rose through the minors on the back of what, thanks to Vin Scully, soon became a fabled curveball. In fact, Kershaw threw just five total sliders in 107.1 innings during his first major league season in 2008, according to Brooks Baseball. A year later, that number rose to 294 sliders in 171 innings, but even that only represented 9.4% of Kershaw’s total offerings in 2009.

The next season, though, the tide began to shift, with the slider becoming Kershaw’s second-favorite pitch, and for good reason—opposing batters hit just .107 against the offering with an .053 ISO in 2009. From there, Kershaw’s slider became his principal out pitch, while he largely scrapped the glorious curveball that once made Vin Scully giggle in amazement.

But the past two seasons, Kershaw has reincorporated his curveball into his arsenal, attacking hitters with a devastating combo of two different breaking pitches: 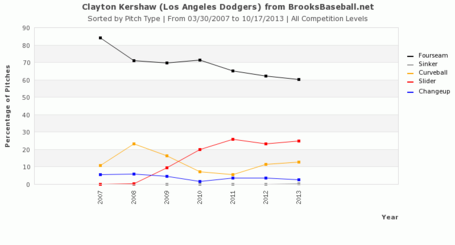 In 2013, Kershaw still preferred his slider (throwing it 24.6% percent of the time), but at the same time increased his curveball usage to 12.6% percent, its highest mark since 2009. He most often threw the curve when ahead in the count against righties, featuring the pitch 26% of the time in such occasions. Yet more importantly, both offerings proved to be extremely tough on opponents, with Kershaw’s slider generating an outstanding 42.6% whiff/swing percentage (sixth-best in the NL), while holding hitters to a .182 batting average against.

The 25-year-old’s curveball was even better, however, yielding a .103 opponent’s batting average and a ridiculous .006 ISO (the best in baseball). That Kershaw began relying on his curveball once again over the past couple of seasons is, of course, no accident, and the results speak for themselves regarding how well he has mixed the pitch in with the rest of his repertoire.

During his first start against the Cardinals last Saturday, Kershaw stuck to the same type of strategy he used during the regular season, throwing his slider 36 times and his curve on 24 occasions. The results were there—14 whiffs and just 12 balls put in play over 60 total pitches—even if the Dodgers ended up losing.

How Kershaw chooses to attack the Cardinals in Game 6 later tonight will be fascinating to watch, and given his track record, St. Louis batters will see their fair share of breaking balls against the Dodger lefty. That Kershaw developed such a devastating slider after reaching the majors is incredible. That he can pair the offering with another quality breaking pitch is even more impressive, and a big reason why Kershaw is headed for his second career Cy Young Award.

In the present moment, Kershaw is the man who stands between the Cardinals and a trip to the World Series. If the Dodgers can win tonight and force a Game 7, Kershaw’s dominant breaking balls will be a big reason why.

Alex Skillin is a Staff Writer at Beyond the Box Score and a Staff Editor for SoxProspects.com. He writes, mostly about baseball and basketball, at a few other places across the Internet. You can follow him on Twitter at @AlexSkillin.