One pitch wonders: a comparison of extreme one pitch pitchers

The bullpen can sometimes be a place where starters who have failed to master two or more pitches go to ply their trades. While rare, some relievers have even become productive relying upon essentially a single offering.

Share All sharing options for: One pitch wonders: a comparison of extreme one pitch pitchers

The bullpen can be a place of extremes; whether it's velocity, pitch type, leverage -- even facial hair -- the relief corps of a pitching staff is a place where unique and narrowly defined skill sets can thrive. Many, if not most, relievers are failed starters, where failure is defined by a lack of multiple secondary pitches to keep hitters from sitting dead red on your best offering, in most instances, a fastball. In the bullpen, this inadequacy isn't as exposed; if you have a plus pitch, you can throw it, over and over, without much need for an alternative pitch (or two) to keep hitters honest.

For a rare few, this hard and fast rule doesn't apply; their success is so reliant upon one pitch -- one really good one that neutralizes hitters and prevents the big inning for the opposing team from transpiring -- that the pitch itself can be the embodiment of the pitcher. Recent history has pegged New York Yankees closer Mariano Rivera, he of the cut fastball, as such a creature, but in 2013, there were a few more who made their living doing the same thing and arguably doing it better.

Looking at qualified relievers in 2013, four fit squarely into this one trick pony mold, with the selection criteria of having utilized one particular pitch for at least 85 percent of all pitches thrown -- Sean Doolittle of the Oakland Athletics, the previously discussed at Beyond the Box Score Kenley Jansen of the Los Angeles Dodgers, the aforementioned Rivera, and St. Louis Cardinal Trevor Rosenthal. The pitches in question, along with average velocities, PITCHf/x pitch values and their respective 2013 ranks for the given pitch are provided below:

For our four, we already see some parallels in how they go about their work; all use a variation of a fastball as their pitch and do so with good velocity and good results, as seen with each having a top ten pitch value for their given pitch. The quartet also split evenly in another interesting fashion -- Rivera and Rosenthal were starter prospects, while Doolittle (first baseman) and Jansen (catcher) are converted position players.

We have a basic framework of how each of the four goes about their relieving business in 2013; how does each compare to one another with respect to getting hitters out across a handful of stats?

First, let's discuss each pitcher's FIPness and how well they control the game, in terms of walks strikeouts and home runs: 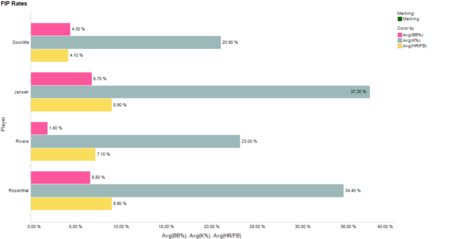 With the above chart, we can see that while Jansen and Rosenthal's cutter and fourseamer respectively generate a lot of strikeouts, they also generate a lot of power for the hitter to get the ball out of the park; both are also more prone to walking batters compared to Rivera and Doolittle, with Rivera's walk rate minuscule in comparison. So far, it appears the quartet's one trick proves tricky for most hitters.

Speaking of hitters, let's now discuss their swing tendencies, judged by overall swing rate (Swing%), swing rates on pitches outside of the strike zone (O-Swing%), inside the zone (Z-Swing%), and swinging strikes (SwStr%). With these stats, we can get an appreciation of whether hitters see the ball well, chase a ball out of the zone, or if they are simply missing on pitches in the zone. 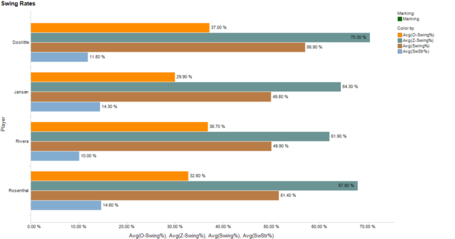 Hitters are swinging essentially at the same amount of pitches across our cohort, whether those pitches are in or out of the zone; Doolittle appears to induce more swings than the other three, but not appreciably so. All pitchers in question generate double digit swinging strike percentages, with Jansen and Rosenthal again leading the pack in inducing swings and misses.

Now that they've swung, how do hitters fare in making contact? 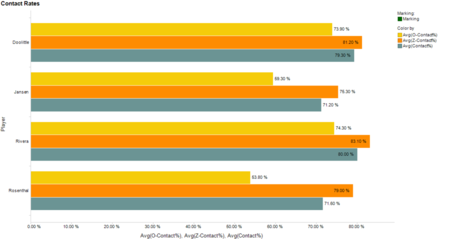 In spite of their long ball woes comparatively speaking, once again Jansen and Rosenthal appear to make fast work of hitters; they generate a lot of swing, swings and misses, and minimal contact, with both also keeping contact rates on pitches out of the zone to a dull roar. While we are unable to discern a distinction with the data presented, it would not be surprising to see both hurlers generating a lot of swings and misses from 2-strike chase pitches out of the zone. Rivera and Doolittle appear to be a little more giving of good pitches to swing at, giving up 10% more contact than Jansen or Rosenthal.

Does that 10% difference break Doolittle or Rivera in terms of giving up solid contact and ostensibly, hits? 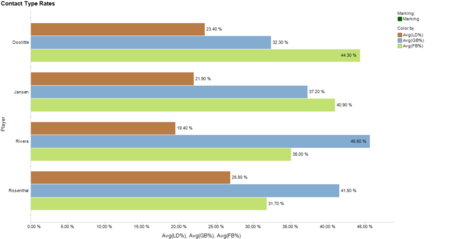 Judging by the types of contact charted in the table above, the answer is resounding 'maybe'; the tides turn ever so slightly in this chart, with Rivera and Rosenthal pairing up to lead the pack in ground ball (GB%) rates, with Doolittle and Jansen showing parallels in their fly ball rates (FB%). This twist provides an interesting confound for Rosenthal, whose fly ball rates, while lowest of the quartet, also includes a decent amount of home runs, as previously mentioned. Rosenthal also has a theoretically higher propensity for solid contact and perhaps a big inning arising from his fourseamer, given his high line drive rate (LD%).

About those hypothetical big hits -- are they really happening against any of our one pitch wonders? 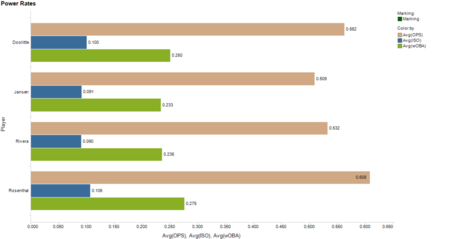 Using isolated power (ISO), on base plus slugging percentage (OPS), and weighted on base average (wOBA) as a guide, our selected hurlers aren't giving up the big hit with any real frequency with their one pitch. If a team were to take its chances against any of the four, judging solely by this chart, Rosenthal might be their best bet for some sort of production, albeit paltry production, at best.

So how are these relievers doing it with only one pitch? While velocity, movement, and even deception in their delivery or even where they stand on the pitching rubber can all play large roles in the success of a pitch and pitcher, pitch placement and approach by hitter handedness also need to be considered when discussing our one trick ponies. Let's do that now, with the help of Brooks Baseball. For each pitcher, their pitch heat maps for raw number of pitches thrown (FA or FC depending upon the pitcher in question) against lefties (on the left) and righties (on the right) are provided below, to get a feel for how each reliever approaches hitters: 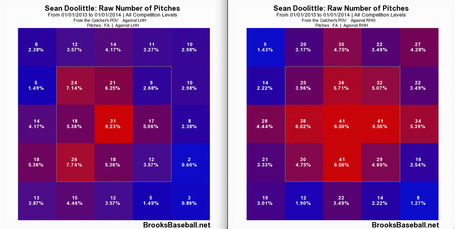 For left handed hitters, Doolittle appears to attack them with brute force, with fastballs right down the middle. For righties, there does appear to be a tad more finesse, with the lefty working corners and even the top of the zone more so than portsiders.

Jansen keeps his cutter up and away from lefties, totally avoiding any situation where he will miss down and in to the lefty's power zone. For righties, a more brute approach, similar to Doolittle against lefties, is seen -- down the middle with some high heat up in the zone when necessary 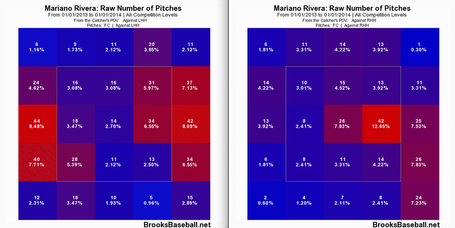 With Rivera, we see an artist at work, in particular, against lefties -- looking at the heat maps for lefties, Rivera does a masterful job of hitting both the inside and outside corners, completely avoiding the heart of the plate. For righties, keeping the all down and away and letting the natural movement of the cutter work in his favor appears to be the approach for Rivera.

Not surprisingly, Rosenthal looks to overpower hitters with his fastball, either throwing it down the middle or up and away for both lefties and righties. In general, not much finesse is seen with Rosenthal's fastball and given its propensity to touch triple digits velocity-wise, it's no surprise.

Despite some slight differences in approach, all four pitchers make the most of a plus plus offering, throwing it with a confidence and knowledge that, in spite of hitters knowing what is coming, they won't do much with it. While this plan of attack is one that is typically discouraged and fraught with numerous pitfalls in the long term, each of these purveyors of the single arrow in the pitching quiver approach nonetheless have enjoyed a bounty of success that belies the simplicity of their repertoires.