How Much Does a Win Really Cost?

Share All sharing options for: How Much Does a Win Really Cost?

It’s a near-truism of sabermetrics that a marginal win costs around $5 million. If you get a two-win player for $8 million, that’s a bargain. If you get a one-win player for $6 million, that’s an overpay. In most corners of the analytical baseball world, player acquisitions and signings are judged as fair, ripoffs, or bargains according to this standard.

Let me back up. As I started to plan ahead for my senior thesis, I realized my analysis depended on having good empirical data for the market value of a win for each season in the post-strike era. The most popular estimates for the annual cost of a win are those calculated by Dave Cameron and hosted on FanGraphs. But Cameron’s figures don’t go back as far as my research required, and more to the point I was skeptical about some of the specifics of his methodology.

So I came up with my own estimates for how much a win has cost over the last 18 seasons. And my results are quite different from the conventional wisdom.

Why I’m Reinventing the Wheel

Allow me to say first that I have tremendous respect for Dave Cameron and his work. Had I not spent years sifting through his value estimations on FanGraphs’ player pages I may never have conceived of my alternative approach, let alone my greater thesis research that gave me reason to do it. Yet I have three specific objections to Cameron’s methodology that I take seriously enough that I felt the need to calculate the cost of a win a different way.

First and most importantly, Cameron’s calculations consider only the first years of the free agent contracts on which they are based. That means a player signed to a three-year deal before the 2010 season would have only his 2010 salary and production included in Cameron’s estimates, with the team’s return on investment for 2011 and 2012 not factoring into the picture at all. There is an obvious sample bias problem here: since a free agent signee’s annual salary generally increases from year to year over the life of a multiyear deal and his production generally decreases with age, his salary per win in the first year of his contract will probably be lower than in his second or fourth or eighth year.

But even forgetting this systematic underestimation of the cost of a win, looking solely at the first years of contracts simply eliminates an enormous amount of data from the calculations. For example, Cameron includes 90 free agent signings worth $396 million for the 2008 season; my data include 347 player-seasons purchased for the 2008 season for contracts worth over $1.3 billion. Ignoring all but the first years of free agent contracts is not the sole reason for at least the former discrepancy (more on that in a moment), but it is difficult to feel confident about an estimate of aggregate returns on investment that omits 70 percent of money invested.

EDIT: I misunderstood the process by which Cameron factors multiyear contracts into his calculations. He does indeed include beyond the first years of such deals, but he does so in a different way than I do — essentially, he measures the cost of a win in the year when it was purchased, while I take the approach of measuring the market at the time each win is produced. A clearer description of his methodology can be found here.

Second, Cameron’s calculations come not from dividing dollars spent by observed production for each group of free agents but from using a Marcel-like projection system for the group’s aggregate WAR to "estimate what teams considered a player’s true talent win rate." In other words, Cameron seeks to calculate what teams thought they were paying per win in a given year, not what a win actually ended up costing. For the purposes of my research (and, I think, baseball analysis in general), the latter question is of greater relevance. (In addition, given that signing teams probably value the players they acquires more than the rest of the league does, I would guess that Cameron's system systematically underestimates the production teams think they are paying for.)

Finally and least consequentially, Cameron appears to have limited his data to offseason signings and thus excludes players signed midseason, a distinction I do not think is appropriate; as far as I am concerned the goal is to estimate the cost of a win in a given season, not a given offseason. I doubt the exclusion of midseason signees affected the numbers that much — most such players are relatively cheap to sign and provide comparatively little value — but even a marginal gain in accuracy is an improvement worth pursuing.

After several weeks of collecting, correcting, matching, updating, and formatting data, I built a database of every player-season I could find in which the player was paid a salary that had been negotiated on the open market from November 1995 (i.e., before the first full post-strike season) through September 2013. In editing the database, I adhered to a set of strict definitions about which player-seasons qualified for inclusion.

Non-guaranteed option years were included if they were exercised, so long as the salaries for the option years had been set while the players were free agents. Seasons covered by contract extensions negotiated after players had already come under team control were not included.

Where I could identify them, signing bonuses, buyouts, and other incentive-based payments were included along with players’ salaries as appropriate based on the times of payments.

In addition, I assumed that players who were still being paid under guaranteed contracts from which they had been released and signed new contracts with other teams received pro-rated portions of the league minimum from their new employers, with equal amounts being subtracted from their previous teams’ promised salaries. I also entered the league minimum salary for players whose earnings I could not find (mostly minor-league signings since 2007).

As for measuring production, I took the sum of each player’s FanGraphs’ WAR for hitting and RA9-WAR for pitching (hey, it counts as value no matter who’s doing it). I used RA9-WAR instead of normal WAR for a number of reasons, the most important being that it works better for the remainder of my thesis and I wanted to maintain internal consistency. I see no reason to think that using traditional pitching WAR instead would significantly alter the results.

From there, I simply divided total dollars spent by total wins purchased for each season from 1996 to 2013.

Okay, you probably didn’t come here to read about how I categorized player-seasons purchased on the free agent market. You want to know how much a win is worth. So without any further ado, here are the results: (click to embiggen) 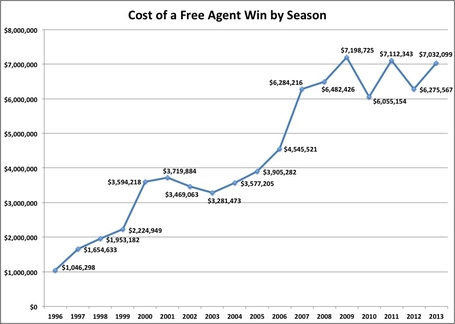 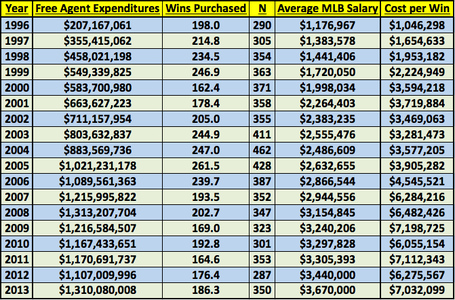 Three distinct periods can be identified from the data. The first, from 1996 to 1999, is characterized by fairly steady growth in the free agent market. Then, in 2000, the supply of available wins plummeted — but the sum of money spent on wins continued to rise. The result was a paradigmatic shift in the market for wins, with the cost soaring from $2.2 million to $3.6 million. The price of a win continued to fluctuate within $750,000 of the 2000 level until 2007, when the growth in dollars invested continued unabated through another talent drought and the cost of a win shot up from $4.5 million to $6.3 million. It has remained within $1 million of that level ever since.

I do not know what caused these sudden shifts to occur — the increases in teams’ free agent expenditures and growing frequency of signing players to contract extensions rather than letting them hit the free market explain the general trends, but not these isolated spikes — but their existence challenges popular notions of how the free agent market has developed. The typical conception of approximately linear growth in the cost of a win (or exponential growth that has manifested itself as quasi-linear in recent years) may hold in the long run, but the assumption of homogeneity in how the market changes from year to year is wrong. Even the assumption of constant inflation does not hold up —we observe the cost of a win actually falling four times already this millennium.

Another somewhat surprising phenomenon is how unresponsive teams’ collective willingness to pay for talent is to changes in the amount of talent available. The year-to-year percentage change in wins purchased via free agency explained less than four percent of the variation in the year-to-year percentage change in money spent on free agents. (I use relative changes to eliminate the non-causal negative correlation between talent available, which has decreased over time as teams are signing core players to extensions more frequently, and salary inflation.) Even after adjusting for general league inflation by dividing free agent dollars by the average MLB salary (this ratio is hereafter implied by the use of the term "adjusted" for free agent expenditures), the explanatory power of the year-to-year percentage changes is under five percent.

But I digress. Interesting as these macro-level trends may be, the most important result for day-to-day baseball analysis is that, this year, the expected cost of a free agent win cost $7 million. (Or $7,032,099, to be precise.) Barring another market spike, that figure is unlikely to change much in 2014. So $7 million it is.

So if you’re the owner of an MLB franchise and you want to make your team one win better, you should expect to have to pay $7 million. Planning to bring in a league-average player? That’ll be $14 million. And if you’re willing to splurge to move up 10 games in the standings, you’d better be prepared to open your wallet to the tune of $70 million. (This assumes that there is no significant difference between any given teams’ or general managers’ expected returns on player investments — a notion I plan to challenge in my thesis.)

The most obvious implication of this finding is that wins are much more expensive than the conventional wisdom says (though they’re actually cheaper than they were in 2009 and 2011). Increasing the market value of a win makes some apparent overpays look more reasonable and previously fair-seeming deals look team-friendly. At $5 million per win, paying $60 million for 10 wins is a waste; at $7 million per win, that’s a bargain. As a perfect recent illustration, according to Cameron’s own calculations, pegging a win as worth $7 million instead of $5 million turns the extension Hunter Pence signed with the Giants last month from an overpay into a market-rate deal.

This number also has some interesting implications for another side of free agency: qualifying offers. A team losing a core player to free agency this winter must offer him at least a one-year deal worth around $14 million in order to receive draft pick compensation for his departure — but that means risking spending $14 million on him if he accepts. Under the $5 million win cost estimate, a team would be foolish to make such an offer to anyone short of a solidly above-average player, as spending $14 million would imply an expected return of around three wins. But at $7 million per win, $14 million becomes the market value for two wins — i.e., a league-average player. Thus, the pool of players to whom it is worth making qualifying offers is probably a lot bigger than many fans would think.

With the help of these numbers, I hope to have established the following facts about the market for free agent wins:

Enormous thanks to Gary Cohen of The Baseball Cube for the data dump that formed the foundation of my database. The sources that helped me to find often-elusive salary and transaction data are too numerous to list, but in particular Baseball-Reference, Baseball Almanac, FanGraphs, MLB Trade Rumors, and USA Today and CBS Sports' salary databases were invaluable in my research. The full data from my research will be made available in the future.