What were the most and least impressive home runs this year?

The 2013 regular season has to come to a close, and with that all data is complete. What are some of the most unique home runs hit? Who hit the most bombs? Who hit a bunch of weak shots? I'll use home run damage (HRD) and data from ESPN Home Run Tracker to determine these. If you are unfamiliar with the concept of HRD, check out this page on my blog. In a nutshell, HRD compares the speed off the bat and distance of a home run to the average of all home runs.

Where are home runs hit? 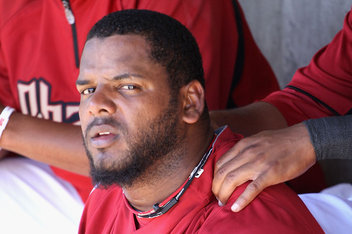 Which parks have the most home runs hit per game at different areas in the park compared to average?

Here are the averages and standard deviations for home runs in 2013. They are very steady year to year:

Yes please. As Notgraphs commenter jwise224 puts it, "When people inappropriately use the word "crush" in any of its forms to describe a home run, point them to this." Evan Gattis hit a home run that went the same distance, but it had a slower exit speed. The Trumbomb had both the highest exit speed and distance this year. It ranks 5th all time (since 2006) most damaging and 16th all time for speed off bat.

This home run and the last counted exactly the same in terms of runs scored. I posit that they are in no other way equals. Fenway Park is well-known for giving up cheap home runs to both left and right field, but the Pesky Pole home runs are the worst in the league. This was the slowest home run this season and sixth lowest HRD total all-time.

Despite what Brian Anderson says, this home run did not in fact go "a mile high." It did go 168 feet high though, which is good enough for the fourth highest apex all-time.

All of these just sneak over the respective wall and are the 12th lowest apex home runs all-time.

This relies on exit angle, not necessarily the angle the ball landed from home plate.

This home run made its rounds after it was hit and I was glad to see a home run to straight center get its proper due. Since they don't appear as long as home runs to straight left due to the proximity of the fence, home runs to center have a lower perception and can be overlooked. This one wasn't.

Most Damaging Hitters in 2013

Here are the top five hitters in total HRD this season:

Not any surprises. All of these guys are well-known to have power. Perhaps Trout's inclusion is a bit of a shock?

Here are the bottom five hitters in total HRD:

Mostly light-hitting types. Pedroia gets here on the strength of the Green Monster and Pesky Pole. Crisp is way off the chart thanks to a short right-field porch in O.co Coliseum.

Most Damaged Pitchers in 2013

This article has focused on hitters, and rightly so. But what about the pitchers who gave up the most damaging home runs this season?

I haven't done any research to see if giving up deep home runs is a repeatable skill, but the variation is definitely much smaller for pitchers than hitters.

Here are the pitchers who gave up the cheapest home runs this year:

Kuroda faced 417 batters and gave up 17 home runs at Yankee Stadium, Camden Yards, and Tropicana Field. He faced 407 batters everywhere else and gave up only three. He really doesn't like those right-field short porches.