The Art of (Not) Walking Batters

This is the first post of many that will explore the differences between two pitchers, pitted against one another because of their ability (or lack thereof) to do something very specific on a mound. Today's edition takes a look at the best and worst pitchers when it comes to issuing walks: Cliff Lee and Jeff Locke.

Share All sharing options for: The Art of (Not) Walking Batters

Everyone knows that limiting walks is crucial to the success of any pitcher in Major League Baseball. The most basic stat that tells us how good (or bad) a given pitcher is at limiting walks is BB/9 which essentially tells us how many walks a pitcher gives up per 9 innings. It should be no surprise that some of the most successful pitchers in baseball are those who limit walks. To wit, many of the best performances come from pitchers with low walk rates, which is why 8 of the top 10 pitchers in BB/9 have ERAs under 3.50.

Allowing many walks is often a sign that a pitcher will not be successful, though this is not always the case. It can also be a sign that a given pitcher is a reliever, but in this case we're focusing on starting pitchers who qualified for the ERA title.

Enter Jeff Locke and Cliff Lee. The latter is one of the best control pitchers in baseball, while the former ... is not. Jeff Locke walked 4.55 batters per 9 innings this season, while Lee walked a paltry 1.29 batters per 9. Jeff Locke threw over 160 innings as a starter this season, averaging out at slightly less than 5.2 IP per start. Lee on the other hand threw over 220 innings, with an average over 7 IP per outing. One could surmise that their respective walk rates played some role in this disparity.

So what exactly is the difference between Locke and Lee? Let's compare them from a PITCHf/x perspective to see how the two men differ, and how they are similar in their approach.

As you can see, the two pitchers have slightly different approaches, but both use a heavy dose of fastballs of varying sorts. Lee uses his sinker more heavily than Locke, and also mixes in a cutter about 20% of the time, a pitch that Locke does not throw. Locke on the other hand throws 4-seam fastballs about 35.5% more frequently than Cliff Lee (it's possible Lee doesn't throw a 4-seamer at all, and that these 4-seamers are other pitches that don't move as much, i.e. a flat sinker).

Both pitchers were successful with the pitches they did throw, as you can see below:

So both pitchers were successful when it came to the pitches that they did throw. Both pitchers have similar repertoires, all things considered. Cliff Lee threw his curveball about 12% less than Locke did, so his lower ratio of offspeed and breaking pitches to hard pitches could have an effect on his likelihood to walk battters.

That is our first big difference. Locke threw "hard pitches", which are generally easier to command, 64.79% of the time. Cliff Lee on the other hand throws "hard pitches" (4-seam, cutter, sinker) an impressive 75.59% of the time. Hard pitches, which should be easier to command than changeups or curveballs/sliders, make up more of Lee's pitch selection which should lend him an upper hand when it comes to avoiding walks.

The biggest difference between the two pitchers is how they attack the strikezone. Take Jeff Locke for example. 31.84% of his pitches were inside the strikezone over the course of the season*. This means that 3 out of every 10 pitches he threw were in the zone, and would presumably be called a strike.

Lee on the other hand threw 47.25% of his pitches in the strikezone. That comes out to more than 15% more pitches in the zone that would presumably be called a strike assuming a batter didn't swing at it. One might assume that Locke had to dance around the zone more because the balls he did throw in the zone got hit harder than Lee's. While true, the difference (86.8% in-Zone contact for Lee vs. 88.5% z-contact for Locke) isn't significant enough to explain the differences we see here.

Below I've included a side-by-side comparison of the raw # of pitches Lee and Locke threw this past season. You can clearly see that Locke pitched down below the zone frequently, while Lee was much more likely to pound the bottom of the zone: 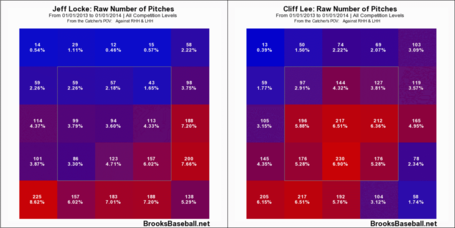 With these charts the differences in approach and command become clear. Locke (left) throws a lot of balls down and to the right of the catcher. Lee on the other hand has a much larger percentage of his pitches coming in the strikezone. In fact, Lee seems to use the entire strikezone with the exception of the top corners for the most part.

The difference is further illustrated when we isolate only the plate appearances where the pitcher delivered a pitch with 3 balls in the count. The charts below show the percentage of pitches both pitchers threw in the following counts: 3-0, 3-1, 3-2: 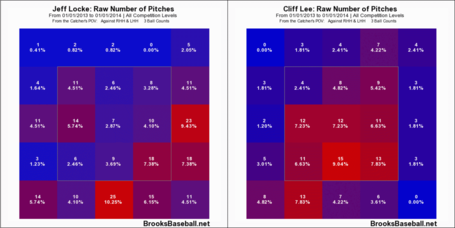 Without even looking at the numbers, it's plain to see that the two pitchers have very different approaches to 3-ball counts. Locke's chart shows the most red/purple in the bottom right corner, and he seems to be pitching to the edges of the zone. Lee's chart on the other hand shows a clear desire to avoid walking batters by hitting the strike zone even harder than normal. This is clear simply by looking at the charts, much less diving into the data presented above.

Cliff Lee and Jeff Locke clearly have different approaches, and different levels of command that impact their ability to minimize the number of walks they give up. While they do have some similarities, the differences become clear when you dive into the locations their pitches actually ended up. Despite their massive differences in BB/9 both pitchers managed to be successful this season. Locke's 4.55 BB/9 may have made it more difficult for him, but he still managed to put up a 3.52 ERA for a club that made the playoffs. Lee's 1.29 BB/9 lead the majors, but unfortunately Lee's 2.87 ERA wasn't enough to get the Phillies over the hump.

*These figures for Zone% are calculated from Brooks Baseball's zone profile charts. Fangraphs has Locke and Lee at 37.9% and 53.3% respectively.