After looking at the similarities and differences between Stephen Strasburg and Jordan Zimmermann and their trek back from Tommy John surgery related to pitch velocities and movement, we now discuss attributes related to pitch usage and touch.

Last week, I detailed the evolution of the velocities and movement of the pitch repertoires of both Stephen Strasburg and Jordan Zimmermann as they returned from Tommy John surgery (TJS), both having said procedure after their rookie MLB seasons. With that analysis, we found that while Zimmermann's fastball velocity remained intact during the course of his return from TJS, with some additional velocity seen on average in 2013, Strasburg's went in the opposite direction, with a statistically significant drop in average fastball velocity over his career, thus far. We also saw that while pitch selection and movements showed some variability in the seasons after TJS, they all, in general, have returned to pre-TJS values for both pitchers, with again Zimmermann enjoying some additional perks post surgery in the form of a little more tilt to his curveball.

Let's go a little further now and discuss some of the other aspects of pitching that do not always return to top form as quickly as fastball velocity does -- the 'feel' and the command and control of pitches. As mentioned in the previous article, fastball velocity typically is the first thing to return open recovery from TJS, while some of the things that require finer touch for a pitch and from ones pitching mechanics can take a little longer to return, with some never quite regaining said feel for a particular pitch. For this analysis, we will again rely upon the data sets available at FanGraphs as well as Brooks Baseball and will look at pitch usages in particular counts as well as strike percentages and swinging strike percentages across pitch type and season to gain an understanding of how well each pitcher's repertoire and confidence in each of his pitches has evolved before and after TJS.

To start, let's look at how Strasburg and Zimmerman have used their pitches in particular situations of an at bat -- first pitches, behind in the count, in even counts, ahead in the count, and with two strikes. To review -- Strasburg's TJS was performed on 9/3/2010 and Zimmermann's on 8/19/2009. 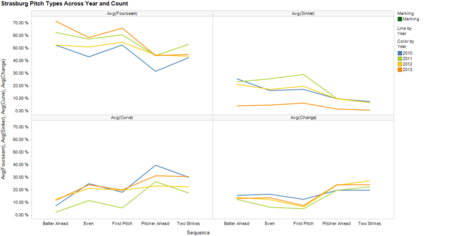 For Strasburg, the biggest difference we see is in how he uses the fastball -- he appears to use it more frequently across all situations now more so than in previous years, especially his pre-TJS 2010 season. As previously mentioned in the part one, he has all but scrapped the sinker/two-seamer. With regards to his offspeed pitches, a couple of things pop up when looking at the plots. First, Strasburg is using the curve ball in batter friendly counts in 2013 more than he has in previous seasons; also of interest is how sparingly he used his breaking ball in 2011, immediately post-TJS, compared to later seasons. With regards to the change up, we see Strasburg using it in pitcher favorable counts more in 2013 than in years past. In general, the shapes of the various data points all mimic one another rather closely, indicative of no gross aberrations in how Strasburg approaches hitters before or after TJS; however, if we were to pick on one aspect of his pitching signature across these situations that has become the most disparate in recent times compared to his 2010 pre-TJS days, it would be how much more reliant he is on the fastball in most counts. Also of note are the 2011 data; out of all of the data provided, it shows the most variability, which is probably more a reflection upon small sample size -- 24 innings pitched in the bigs -- more so than any changes in approach. Overall, outside of the swing towards more fastballs, Strasburg's 2013 looks an awful lot like his 2010, with some noisy data coming from the 2011 and 2012 seasons, which is again consistent with the typical trajectory taken by pitchers recovering from Tommy John. 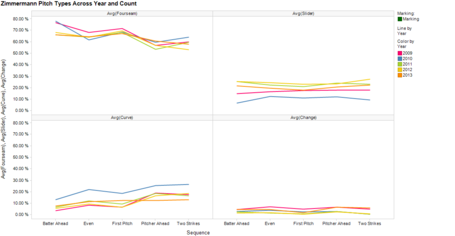 At first glance, one striking difference between Zimmermann's data versus Strasburg's is how consistent his rates are across seasons -- all of the data look pretty much the same and trend with one another across seasons. Like Strasburg, we do see Zimmermann shy away from his primary breaking ball -- in his case, the slider -- in his innings in 2010, right after TJS. Like with Strasburg, this might be due to a small sample size (31 innings pitched); however, it could be debated that the slider was shied away from as a precautionary measure, due to the stress that the pitch can put upon the elbow. In its place, Zimmermann used his curve ball a little more frequently, but appears to have ditched it in later seasons in favor of the slider as his primary secondary pitch. With the increased reliance and confidence in the slider in later seasons came another interesting disparity seen with Zimmermann -- he is using his slider more frequently in situations where he is behind the hitter. This is in contrast to Strasburg, whose more recent post-TJS seasons have seen him throwing more fastballs in all situations. In general, Zimmermann has remained the same pitcher before and after surgery without much deviation from his fastball/slider combo, aside from 2010, immediately post-TJS.

So far, we see few drastic changes in each pitcher's game plan before or after TJS, now let's look at how their command and control of their pitches has fared over the years. 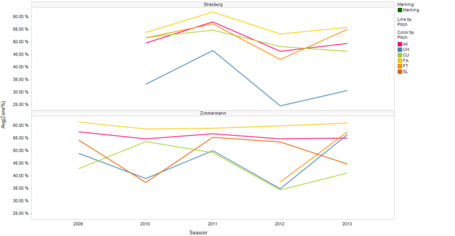 With respect to percentage of pitches in the strike zone, Strasburg definitely has shown some mild inconsistency compared to Zimmermann, especially with the fastball. However, Zimmermann has not been immune to the plate moving on him on occasion, especially with his secondary pitches. As has been mentioned previously, both appear to have the greatest variability in their offerings immediately after TJS, but do a good job of reverting back to or very close to their pre-surgery ways. 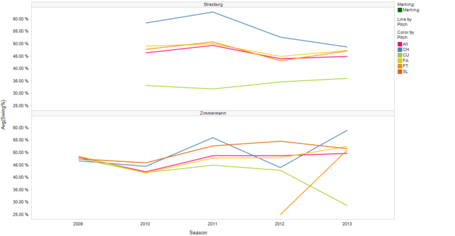 In the above graph, we have swing percentage of each pitch across year. Broadly, Zimmermann appears to be getting more swings on his pitches except for his curve ball, which he uses sparingly nowadays. For Strasburg, we see a gradual drop in the number of swings on his change up as he becomes more removed from his TJS, but the reverse being true on his curve ball. One caveat to this data that needs to be addressed is the additional line seen in Zimmermann's data for 2012-2013, which is his sinker/two-seam fastball (FT); previous data was taken from Brooks Baseball, which does not distinguish between two and four seamers for Zimmermann, who has thrown 63 two seamer between both seasons combined. 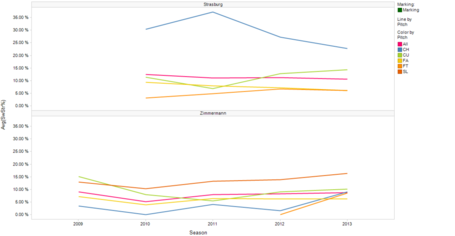 Sometimes the best gauge a pitcher has in determining how good his stuff is is whether hitters are making contact or swinging through; this is where this final graph above comes into play. Looking at swinging strike percentages, we see that Strasburg's change up, while still devastating, isn't quite what is was before surgery. On the other hand, his curve ball appears to have a little more to it in 2013, with it being at a career best as far as swinging strike rates go. While closer to what he was before TJS, Strasburg also appears to not be missing quite as many bats with the fastball these days. For Zimmermann, we again see more consistency in swinging strike rates, with the only significant difference being a slight drop in swings and misses with his curve; while not dramatic, his other pitch rates are on the rise. For the sake of brevity, I have not included the data here, but looking at other measurements that could speak to a pitcher's command and control -- walk rates, zone percentages broken down by inside and outside of the zone, as well as swing rates at pitches inside and outside the zone -- the same trends seen with each pitcher in the above charts, hold true with these statistics.

While this is not at all an exhaustive look at each pitcher's return from TJS under the watchful eye and innings sensitive powers that be of the Washington Nationals, it is one that has brought to light a number of interesting talking points and results that warrant further research and discussion. One minor technical caveat that should be noted with the PITCHf/x data is the possibility that the data from 2011 and earlier might not be as specific and sensitive as the more recent data, simply due to the evolution and improvement of technologies and techniques related to the system's pitch classification criteria. While it doesn't necessarily make the older data bad, it does possibly introduce a little more noise to wade through; given the nature of each pitcher's repertoire, I am less apt to feel that there are any drastic differences in pitch classifications to be considered with respect to the older data. From a team and innings limit perspective, it is difficult to say whether this method of monitoring a pitcher's return from TJS is the way to go; it will be interesting to collect more data in the form of progress from the likes of other TJS survivors that were mentioned in the previous article, Taylor Jordan and Lucas Giolito, and see if this carefully measured way of bringing back a pitcher is worthwhile.

From the players perspectives, we saw that while each diverged from each other with respect to fastball velocities over the course of time, both stayed true to their approach in getting hitters out for the most part. In terms of pitch 'feel' and the general command of their pitches, each has shown some variability in the two seasons post-TJS especially with secondary pitches, but overall, appear to be their usual pre-TJS selves on the whole. Regarding Strasburg and some of the more worrisome trends seen in his data, in particular the velocity drop on his fastball as well as some of the inconsistencies seen in other stats, the verdict should still remain out on whether his 2013 season is a prelude to the rest of his career or another step towards a full return to pre-surgery potential. Looking at Zimmermann's data, it might simply be a question of Strasburg needing a little more time to recover completely, which might be the ramification of throwing so hard to begin with -- after so many years of maximizing his biomechanics to throw such an overpowering repertoire, it might take a power pitcher such as himself a tad longer to fully recover what was lost. However, if what was on display was the new normal, the Nationals still have a tremendously talented ace and the success that he and his fellow rotation mate and TJS survivor Zimmermann display will go far in proving the rehab policies that the Nats used were prudent and potentially the gold standard for those returning from Tommy John surgery.