Was Miami's offense the worst ever?

Back in April, Miami's offense was sputtering at a historic pace. Were they able to claim the title of worst offense ever?

Share All sharing options for: Was Miami's offense the worst ever?

With the 2013 regular season in the books, we can finally put some of the more unique performances of the year in historical context. While most of you likely spent the year following Miguel Cabrera's quest for a second straight triple crown, Chris Davis' run at 60 home runs, or everything that Mike Trout did, I was fully focused on the offense of the Miami Marlins. You see you may recall that less than 20 games into the season, I asked if Miami's offense was the worst of all time, and they battled valiantly all season long to claim the title. So, just where does the performance rank in history?

Using the same metric we looked at in April, wRC+, the team unfortunately came up just a bit shy of the all-time mark, but they did manage to grab a spot in the top (or bottom) ten years since 1900.

As previously mentioned, you will notice that every other team on the list came before 1985, with the majority of them occurring prior to 1966. Even though we are measuring teams with wRC+, which is park and league adjusted, the game and the run environment in 2013 is considerably different than that of 50+ years ago. From the original article, we can see the progression of runs scored over time: 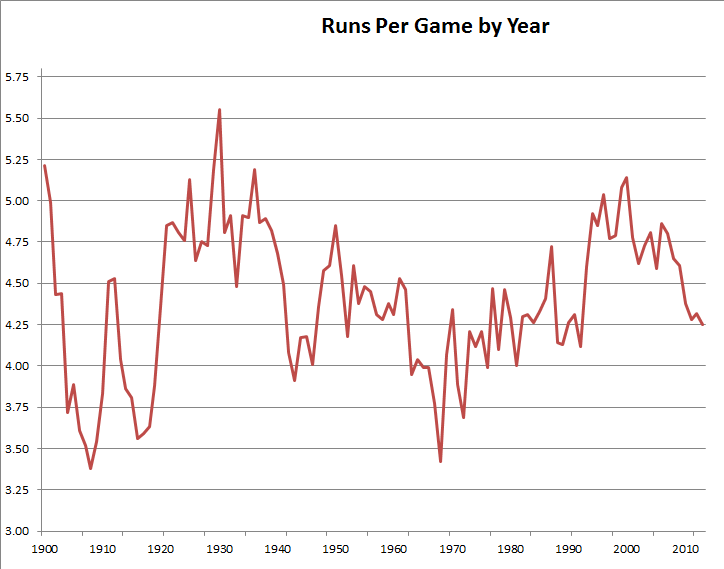 As you can see, since hitting a low point in in 1968 (forever known as the year of the pitcher), offense had been a steady rise, peaking at just over five runs a game in 2000. Since then it has declined slightly, but it's still quite apparent that the run scoring environment of today is much better than it was 50 years ago. Taking that into account, let's look at the Marlins' offense compared to its more contemporary peers. The following table looks at the worst teams (by wRC+) since the year 2000:

By a much slimmer margin than I originally anticipated, the Marlins 2013 season does rank as the worst since the year 2000, at least in terms of wRC+. That does bring up an interesting point -- wRC+ is certainly not the only measure of offense that we have available to us. I consider it to be the easiest all-encompassing number to compare teams from different eras, however it doesn't give us much of a sense of how the Marlins were in different areas of offense. Therefore, I took the liberty of gathering their all-time ranks (since 1900) in a number of offensive categories to see where they really struggled as a unit.

Taking into account that the ISO-rank is somewhat misleading because the vast majority of the teams that in the top-600 come from the early 1900s before extra base hits were a part of the game, we can say that this team was one of the worst ever judging by almost any metric you want. And in terms of context-based measures, Miami is probably the worst we've ever seen. 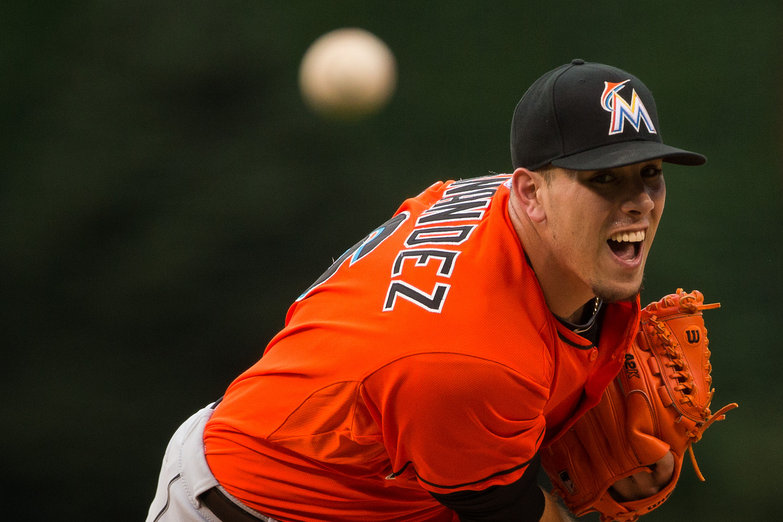 Rather read about a positive place in history for the Marlins? Look no farther than 20-year-old phenom, Jose Fernandez, and the season he had for the Fish in 2013.

Obviously, worst offense of the modern era not a distinction that Miami, or any team for that matter, would like to have attached to their franchise. But in fairness, it's no secret that 2013 was a rebuilding year and the team used a lot of young players, some of which were probably not ready to take on full-time roles in the big leagues. Somewhat unbelievably, Giancarlo Stanton and Christian Yelich were the only two non-pitchers that were above league average offensively, a number that will surely increase in 2014. And although he was their best offensive player, Stanton's 2013 actually represented a far cry from what we expected entering the season. Fully healthy next year with a slightly better lineup around him, Stanton should at least be able to regain the 150-160 wRC+ form we've seen from him in the past. That, along with the continued development of Yelich, Jake Marisnick, Marcel Ozuna, and Logan Morrison should give Fish fans something to look forward to in the near future.

So sadly, the Marlins were not quite inept enough at the plate this year to be considered the worst of all-time, but they certainly are the worst offensive club I have ever witnessed. For their sake, hopefully they can laugh off the place in history and get back at it in 2014. And if history is any indication, there is certainly some hope for next year's team. The 2004 Diamdonbacks team that previously held the lowest wRC+ since 2000 title, finished in the cellar of the NL West at 51-111. And the very next year, they were 77-85, largely in thanks to a 91 wRC+ as a team. Even if no one else is, I'll be watching the Marlins next year to see if they can make the same type of leap.