The Decline of the First-Pitch Out

An examination of the disappearance of the first-pitch out in the last few decades and a celebration of those pitchers who excelled at inducing them.

Share All sharing options for: The Decline of the First-Pitch Out

I'm typically not a fan of using the exception to attempt to disprove a rule, and this especially applies to my interpretation of sabermetric principles. For instance, just because Mariano Rivera has showed an ability to sustain a low BABIP for years doesn't mean that BABIP is universally sustainable. And just because Tom Glavine consistently beat out his FIP year after year doesn't mean DIPS is broken. The rule remains relevant in these cases because players like Tom Glavine and Mariano Rivera are freaks of nature, and we can't expect the vast majority of players to be capable of the same superhuman abilities.

A similar issue was raised in a thread here at Beyond the Boxscore recently, during a discussion about strikeouts and pitching to contact. Spencer Schneier and I were arguing that any effort to induce a groundout comes with enormous risk of giving up a hit. While long-time BTBS frequenter "maddogisgod" countered that "the best outcome a pitcher can get is to induce a sawed-off three-hopper right back to him on the first pitch, not a strikeout" and that "Gregg Maddux made his career doing just that." This ideal outcome gets you the same desired result as a strikeout, obviously, with the added bonus of not damaging a pitcher's pitch count.

This is all wonderful of course, assuming your pitcher can in fact induce a sawed-off three-hopper on command. The problem is (and we know this from other studies) that a 0-0 count decidedly favors the batter. Yet, I certainly have no disagreement on Greg Maddux's capacity to perform in ways other pitchers cannot. He was a bonafide phenom. A genuine freak of nature.

But this idea of producing quick outs intrigued me, and I decided to run a few queries to determine which players in recent history have demonstrated the ability to induce the one-pitch out consistently.

First I looked at those pitcher-seasons with the most one-pitch outs, using retrosheet data since 1988:

Seasons with Most First-Pitch Outs since 1988

It's not so remarkable that Rick Reuschel's 1988 season is #1 on this list, but it is quite impressive that he was 39 years old at the time.

Orel Hershiser's 1988 at #2 was his famous Cy Young season in which he recorded 59 consecutive scoreless innings pitched. He also posted a surreal .239 BABIP that season, which in many ways contributed to both his scoreless streak and the record-setting first-pitch out total. Less than 25% of all first-pitch balls in play ended up as hits for Hershiser that season, which translates into an incredibly helpful .245 BABIP for that split.

But it should surprise none of us that Greg Maddux himself shows up four separate times in the top ten. In fact, 11 Maddux seasons showed up in the top 50. It should also not surprise anyone, then, that from 1988-2012 Maddux has posted one of the best First-Pitch Out rates amongst all pitchers with at least 5000 batters faced in that period.

Immediately you'll notice that nearly all of these pitchers did most of their pitching in the late '80's and early 90's. And you may have also noticed in the single-season 1PO leaders table, that 4 of the top-ten seasons occurred in 1988, and just two seasons (Maddux's 1996 and 2000) occurred after 1993. We all know that the game went under significant changes after the strike in '94, and many historians choose to define 1993 as the milemarker between two eras.

As a consequence of these changes, it almost seemed as if overnight Baseball changed it's attitude towards the first-pitch. A look at first-pitch BABIP including HR, which we'll call BACON for BA on Contact, from 1988-2010 shows an incredibly sharp rise in batter success when swinging early. 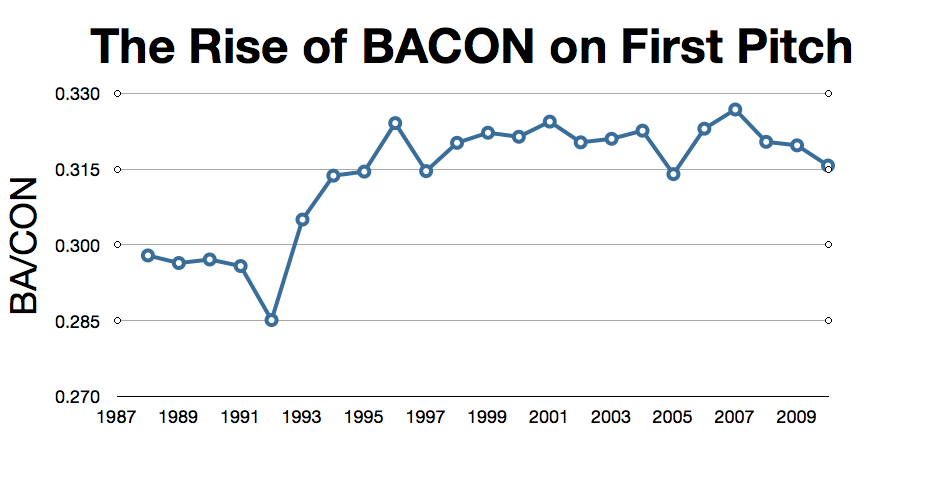 This may seem hard to believe, that such a radical change occurred in such a short time, but the jump in BACON is basically in tune with the overall BABIP changes of that time period.

The first pitch-out has therefore been on a steady decline since the data has been available, falling from 10% of all PA's in 1988 to just 7.3% in 2012. In fact, we haven't seen a pitcher record more than 115 first-pitch outs since Tanyon Sturtze in his 2002 season with the Devil Rays. Since then we've seen a few seasons from Carlos Silva, Roy Halladay and Brandon Webb crack the 100 first-pitch outs threshold, but not again since 2005.

Greg Maddux was a freak of nature. Even as the era of the first-pitch out abandoned us, Maddux continued inducing "sawed-off three-hoppers" back to the mound well into the 2000's. How he did this exactly is the holy grail of pitching-- the fusion of performance and efficiency. We can (and will) speculate all we want about 'quality strikes' and 'late movement', but the truth is we'll just have to accept that we will never know how Maddux did what he did.

EDITED to change all "BABIP with HR" references to "BACON". All data courtesy of retrosheet.