A look at which players in baseball history have gone out on top of their game either by choice or by tragedy.

I was inspired to run this query for several reasons, really, but the primary catalyst was the recent announcement from Hideki Matsui that he will be retiring from baseball after ten MLB seasons. Matsui had been a reliable contributor to the Yankees lineup for years beginning in 2003, but his value, especially in terms of WAR, plummeted in the later days of his career, ultimately bottoming out at -1.4 for the Tampa Bay Rays in his final season.

This led to me to recall those players in my lifetime that were able to prevent this late-career slide into irrelevance, and instead "go out on top," as it were. Of course, the first example I thought of was another long-time Yankee, Mike Mussina. Mussina was the perfect example of a pitcher who learned to adapt his game as he grew older, and in his final season in 2008 he went 20-9 with a 78 ERA- and a remarkable 4.8 WAR at age 39.

What I wanted, then, was a list of Mussinas: a group of inspiring players that walked away from the game, head held high, age-defying and resilient, without ever having endured the decay that seems to seize the vast majority of baseball greats in their final years.

Instead, my database mostly returned a slate of unfortunate tragedies and abbreviated careers a la Roberto Clemente and Ray Chapman-- players that had clearly and sadly gone too soon. Despite this undesirable turn of events, I've decided to leave the title as I originally intended: Greatest Final Seasons. Hopefully we can at least remember them as they were before they left-- as great ballplayers.

Still, a few Mussinas did make the cut (including 'Moose' himself), and the list isn't entirely depressing. But I insist you to try and guess which position players and pitchers made the top 15 before you read the tables below, as you might find yourself as surprised as I did at some of the results.

All seasons are sorted by Baseball-Reference WAR, and I have restricted the list to final seasons after 1900. Let's begin with the hitters:

Prior to the 1921 season, Shoeless Joe Jackson was famously banned from baseball by commissioner Kenesaw Mountain Landis for his participation in the 1919 Black Sox Scandal. Jackson was one of the best players in the league at the time of his exile, posting 5+ WAR in four of his last five seasons. The conditions of his sudden and abrupt dismissal from the game of baseball are obviously quite extraordinary, as it's nearly impossible to imagine a 7 WAR player being exiled from the game today.

Similarly, Jackson's teammate Happy Felsch at #2 was also exiled from the game in 1920 for his own involvement in the same scandal. Unlike Jackson, who was 32 years old at the time, Happy was at the peak of his career at age 28 and was just coming off his best season to date.

This past New Year's Eve marked the 40th anniversary of Roberto Clemente's death in the 1972 off-season. Clemente was en route to Nicaragua on a relief mission to assist earthquake victims when his plane tragically crashed off the coast of Puerto Rico immediately after take-off. Clemente is remembered for his humanitarian efforts as much as his baseball talent, and the latter is especially highlighted by his placement at #3 in this table, with an outstanding 4.7 WAR in his final season at age 37.

There are few baseball icons larger than Clemente, but Jackie Robinson is almost certainly that. Robinson, interestingly, is the first player on our list to voluntarily leave the game, although the adverse effects of his diabetes at age 37 certainly played a large part in his decision to retire. It is likely that Robinson had a few good years left in him, hanging it up after an outstanding 4.3 WAR season.

Roy Cullenbine is a sad story of a different kind-- one of an under-appreciated career rather than blatant career-ending tragedy. Cullenbine regularly posted walk rates between 15-20% over the course of his 10 year career from 1938-1947. His ability to harness the power of the free-pass only improved as time went on, ultimately topping out at a remarkable rate of 22.6% in his final season in 1947. Unfortunately for Cullenbine, his unique knack for the bases on balls came at a time in baseball history where significantly more weight was placed on batting average (Roy only hit .224 that year). Despite providing his club with three consecutive seasons of 4+ WAR, Cullenbine was released from the Detroit Tigers at the age of 33.

Will Clark at #7 represents one of the more recent additions to this list, retiring in 2000 as a 6-time all-star. Clark was just 36 years old at the time of his retirement, coming off a 3.8 WAR season where he hit .319/ .418/ .546 for two teams over just 130 games. Clark cited nagging injuries and 'time with his family' as reasons for leaving the game, but he clearly had plenty off production left in his bat.

Ray Chapman at #8 was an excellent hitting shortstop for the Cleveland Indians until he was hit in the head by a pitch in the fifth inning of a game on August 16, 1920. Chapman died 12 hours later. He was 29 years old.

Jim Doyle at #9 was a third basemen for the Chicago Cubs who died from a burst appendix in the off-season prior to the 1912 season. In his 1911 rookie-season, Doyle posted an impressive 3.2 WAR at the age of 29.

Hank Greenberg at #11 decided to end his Hall of Fame career after nagging injuries mainly in his elbow began affecting his play. Greenberg still managed to produce a sizable 3.2 WAR, and was just one season removed from a 6.3 WAR season in 1946.

And Barry Bonds at #12, of course, was effectively shut out of baseball when no club agreed to sign him in 2008 after he was indicted on charges of perjury and obstruction of justice in November of the previous year. 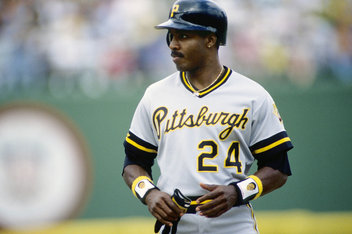 Sandy Koufax at #1 should have been an obvious guess for those who were playing along at home. Koufax's outstanding final season in 1966 was worth a mystifying 10 WAR and sits miles above the runner-up. Incidentally this amazingly valuable final season also scores well above the 7.3 WAR from Joe Jackson, who led all position players. Koufax had been warned early into that final year that his 'left-arm of God" would not be able to withstand the rigors of another season. As a consequence, Koufax was forced to leave the game of baseball behind despite leading the league in wins, strikeouts, ERA, and Innings Pitched. Koufax's 1966 is unquestionably the greatest of the greatest final seasons of all time.

Win Mercer at #2 is probably not the most familiar pitcher you'll read about today, but his story is likely one you'll remember after today. Mercer had a number of fine seasons in his early twenties, beginning with his 4.3 WAR rookie-season in 1894. He struggled over the next few seasons until finally posting a triumphant 5.7 WAR in his final season at age 28. Sadly, Mercer committed suicide by inhalation of illuminating gas that off-season. Reports vary as to the reasons behind Mercer's suicide, including claims that he had unconquerable gambling debts, women troubles, pulmonary disease, and severe bouts of depression.

Mike Mussina at #3 is really the only case among all 30 of these ballplayers where retirement was a decision made almost entirely on his own terms and not the result of nagging injury, death, tragedy, permanent exile, the world at war, or collusion. Mike Mussina, as near as I can tell, is the best example of any baseball player who decided, fully of his own volition, to go out on top. 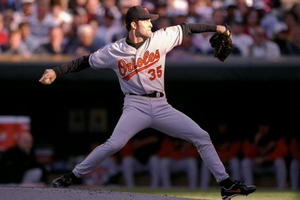 Eddie Cicotte, inventor of the knuckleball, owner of an 82 ERA- and 53 career WAR before the age of 36, was also banned from baseball for his participation in the Black Sox scandal of 1919. He is the fourth and final player we will read about this morning to have been banned for the throwing of the 1919 World Series.

Strangely, I failed to find much of any information on the early death of Dutch Ulrich at age 28. He pitched three seasons of professional baseball from 1925-1927 with a fantastic career 82 ERA-. The same goes for the early retirement at age 33 of Red Donahue, whose career spanned 13 seasons from 1893-1906. If anyone has any information about Dutch or Red, I'd appreciate the heads up.

In his first full-season at age 21 Britt Burns produced a mammoth 6.7 WAR and a sparkling 78 ERA- for the Chicago White Sox, inviting high-expectations for the breakout rookie star. Britt posted a fairly equal mix of excellent and disappointing seasons after that, but ultimately ended with a formidable 4 WAR season in 1985 at the age of 26. Shortly after being traded to the Yankees, it was revealed that Burns had a degenerative hip disease that kept him entirely out of baseball for the next several seasons. Britt attempted a comeback in 1990, where he made 4 starts for two minor league clubs, culminating in a disastrous 11.08 ERA. He never again pitched in a major league game.

Larry Jackson at #8 was a four time all-star for three clubs over the course of 14 seasons from 1955-1968. His career is a fairly impressive one in retrospect, ultimately earning 48 WAR. His Hall of Fame rating, according to Adam Darowski's Hall of Stats, is a very Dale Murphy-esque 86. Yet, at the age of 37, Jackson was selected by the Montreal Expos in the 1969 expansion draft and opted to retire rather than take his chances with the Canadian start-up club. (Gil Mcdougald, #14 among position players, allegedly retired for similar reasons in 1960.)

Monty Stratton at #9 was another promising and rising star in the Chicago White Sox organization whose career was abruptly derailed by tragedy. After a combined 8.5 WAR in his first two full seasons as a starter for the southsiders, Stratton was involved in a hunting accident in the 1939 off-season where he shot himself in the right leg. Even after amputation and the long process of accustoming himself with using a wooden leg, Stratton still attempted a comeback several times in the minors with mixed results. His 1938 season would in fact prove to be his last, but his resolve to overcome his adversity was impressive enough to inspire Hollywood to make a feature film of his life, starring Jimmy Stewart:

Larry French at #10 also had a long, admirable career, totaling 42 WAR and an 81 Hall Rating. French left baseball in 1942, like many of his contemporaries did, to join the armed services. But French, age 34 at the time of his enlistment, opted to remain in the Navy after the war and continued his service until he eventually retired at the age of 62 in 1969.

Curt Schilling was an unstoppable force of nature. 3.8 WAR in 151 IP at age 40 just about says it all.

Mike Sirotka at #12 was a yet another promising young pitcher for the Chicago White Sox, who posted an impressive 90 ERA- over six seasons before being traded to the Blue Jays in the off-season of 2001. Coincidentally or not, it was revealed shortly thereafter that Sirotka had severe shoulder damage and would never pitch again. The controversial incident, sometimes called "Shouldergate," sparked a heated debate between the two front offices for quite some time afterward.

The first exclusion I felt required investigation was Thurman Munson in 1979. Munson, who died practicing touch-and-go landings in a small jet, actually finished the 1978 season with 2.2 WAR in just 97 games. Lou Gherig, incidentally, retired after 8 games in 1939 at the age of 36. In his previous season he posted 4.2 WAR, which would have placed 5th overall amongst position player's final seasons.

Also, one final note: the code for this query required that I eliminated 2012 seasons outright (as well as 2011 seasons for pitchers for reasons that would take too long to explain). As a consequence, any player retiring in either of these seasons would not have made the list. To my memory, there were no recently-retired players who would have cracked either top 15. If I have missed any, please let me know.