Strikeouts are most-certainly not bullshit

My response to a quote a few months back accusing strikeouts of being as such.

Share All sharing options for: Strikeouts are most-certainly not bullshit

Back in July, Nationals' pitching coach Steve McCatty denounced the value of strikeouts for a starting pitcher in a Yahoo Sports article, saying that "strikeouts are bullsh*t."

While Mr. McCatty is more than entitled to that opinion, I could not help but disagree.

What is so peculiar about this comment, is that Washington's starting pitchers had the second-best ERA of any time in baseball, and were fourth in K%. McCatty obviously knows a bit about pitching, as the Nationals rotation is one of the best in baseball, and he is the pitching coach of said staff.

While everyone agrees that strikeouts are the best outcome a pitcher can get, as they are for the most part a guaranteed out, there may be some logic to the notion that high strikeout rates may lead to higher pitch counts and earlier exits from games.

I ran some numbers for the sample of qualified starters from 2002-2012, and came up with some interesting findings.

When I ran K% with innings pitched per start (IP/S), I found a positive correlation with an r-squared of .108 (chart below), but that is hardly definitive. There is a bias, in that pitchers who strike more batters out are going to pitch more innings, because they tend to be better than pitchers who don't strike a lot of batters out. 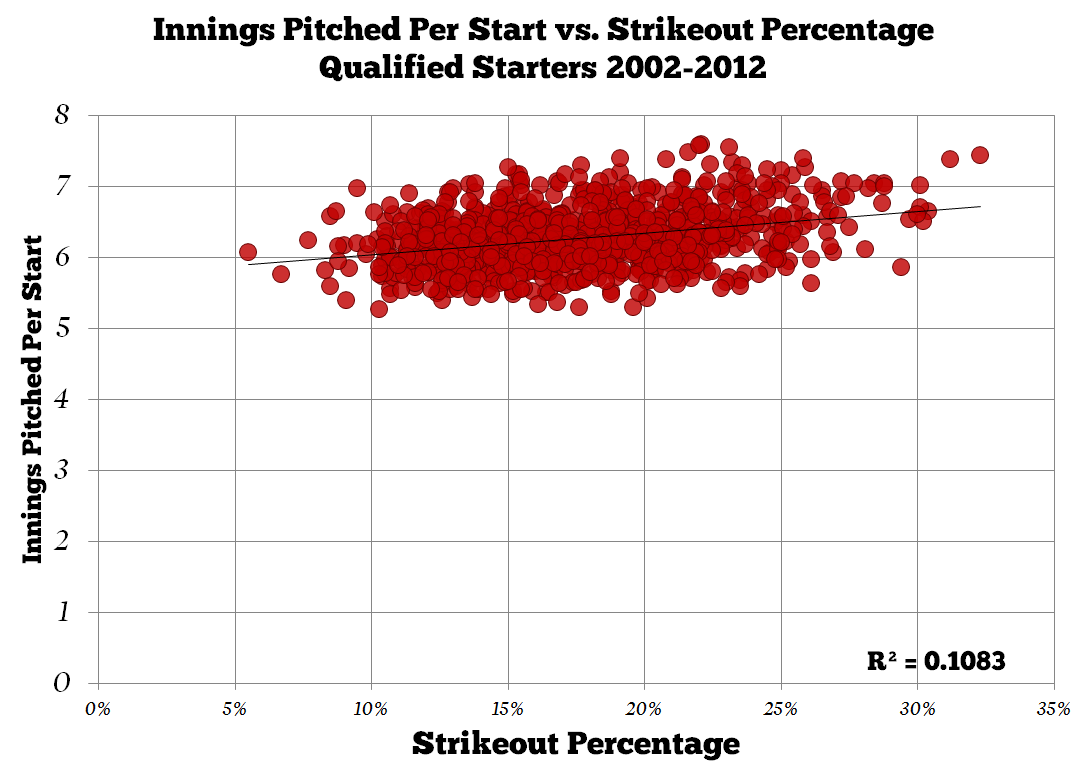 While that data would in theory make McCatty seem wrong, it is not the strongest correlation and there appears to be a bias. I decided to look closer into his comments, specifically:

"If you try to strike out every hitter you're going to burn up pitches," says McCatty, the Nationals pitching coach. "Look, just do the math. If you're taking 15-20 pitches to get through every inning that will multiply fast."

Since Mr. McCatty asked us to do the math, I did. When running pitches per plate appearance (P/PA) with IP/S, I found that there was an almost nonexistent negative correlation (r-squared of .032), so there may not be as strong a connection between the two as McCatty (or myself) would have expected.

Even though the relationship between P/PA and IP/S was weak, I think common sense should prevail that McCatty has a good point regarding P/PA and IP/S. I just challenge the fact that strikeouts are detrimental to any pitcher's success, because they tend to be the best outcome a pitcher can get.

The reason that this caught my attention is the fact that Stephen Strasburg is possibly the best pitching prospect since Mets' phenom Dwight Gooden, who many believe was corrupted by Mel Stottlemyre, the Mets' pitching coach at the time. Stottlemyre thought it would be best to alter Gooden's repertoire by adding a two-seam fastball. The Mets feared that Gooden would blow his arm out, and wanted to have him pitch to more contact.

After his magnificent 1985 season, the Mets worked with Gooden on a two-seam fastball during the 1986 Spring Training. After that (chart below), his K% dropped dramatically and his ERA- rose accordingly.

As recent studies right here at BtB have shown, strikeouts do not cause injuries. The numbers above show that strikeouts are not necessarily the culprit when it comes to shortening pitcher's outings. That tends to result from poor pitching, which throwing less-hard and trying to pitch to contact may lead to.

I believe that most of what I have said is generally accepted by the sabermetric community and is not groundbreaking, but hopefully Dwight Gooden stands as warning to the Nationals to not tinker with their young phenom. It would be a tragedy to watch history repeat itself.