Earl Weaver passed away early this morning. Weaver was one of the most entertaining and innovative managers in the history of the game.

Earl Weaver has passed away of an apparent heart attack while on an Orioles’ fantasy cruise. He was 82.

So much of my interest in baseball is directly linked to Earl Weaver. It's an incredible loss.

I've only recently discovered Ross Carey's incredible Replacement Level Podcast (it's sooo good, go listen!). Ross starts each episode by asking his guest what got them into baseball in the first place. Yesterday—just yesterday—I was listening to an episode, heard the question, and started thinking a lot about Earl Weaver.

Many guests talk about their parents introducing them to the game. That didn't happen for me. My brother and I found baseball on our own, as our parents weren't sports nuts. My dad, however, was interested in computers. I got into both baseball and computers around the same time. Since my dad knew I liked baseball, he picked up a game for the Apple II called Earl Weaver Baseball.

And it changed my life. 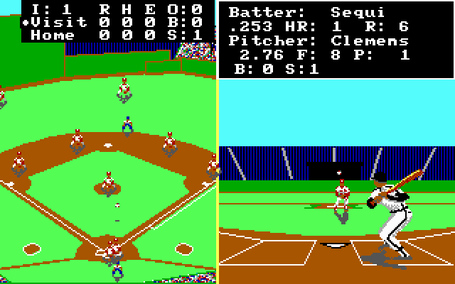 Earl Weaver Baseball (EWB) was launched in 1987 by Electronic Arts. The game was designed by Don Daglow and Eddie Dombrower and inducted into the Computer Game Hall of Fame. It wasn't just an arcade-style game (though it had an arcade mode). It was a full fledged simulation. And it was awesome.

On road trips in 1985, Daglow and Dombrower spent a ton of time interviewing Weaver about strategy to build the game's artificial intelligence. Sure, the game had its flaws and bugs, but it was the most realistic baseball game I have ever played (and honestly was still the best for a long time after that).

Not only could you play games between teams full of Hall of Famers, you could also order stats disks (like full seasons and my favorite, a disk of all of the best individual teams of all time). But the most amazing feature for me was that you could create players. I would play leagues with friends where we punched in numbers off the back of baseball cards. I would play leagues by myself where I was behind the plate, catching for the Red Sox, taking on the 1961 Yankees.

Because of this game—and subsequently reading Weaver's book on strategy (which I picked up and thumbed through as recently as three days ago)—my love for baseball never existed without my love of baseball's history and baseball's numbers. It has always been this way for me. In many ways, you could have looked at me when I was eleven years old and not be at all surprised that one day I would make something like the Hall of Stats. It was inevitable.

Weaver, of couse, was a huge early proponent of sabermetrics. He kept detailed hand-written statistics about matchups. He was an early believer in on-base percentage. Defense was a big deal to him. His disdain for small ball was legendary. He used every asset he had—and used it perfectly after assessing all the information he collected.

Here are some of Weaver's "Laws" from Weaver on Strategy:

Of course, there were the ejections. Weaver was ejected between 90 and 100 times (depending on the source). Some ejections were quite comedic:

During one particular tirade with an umpire, Weaver headed to the dugout screaming, "I'm going to check the rule-book on that" to which the umpire replied, "Here, use mine." Weaver shot back, "That's no good - I can't read Braille."

I've never been to a Hall of Fame induction weekend. I was thinking of going this year. Of course, there's the Deacon White angle. But the chance to see Earl in person was probably the #2 draw. I've never met him, but his work, his ideas, his legacy… they just meant so much to me. My interests in baseball essentially all come from Earl Weaver.

He was one of a kind.