Taking a look at a new way to view hitter's ability to discern balls and strikes.

Share All sharing options for: A New Way to Measure Plate Discipline?

I have been spending a good amount of time thinking about disciplined hitters lately. What is a true "disciplined" hitter? What are the characteristics of a batter who hits with discipline?

As any good blogger would do, I proceeded to mess around with Fangraphs leaderboards for a while, finally devising a plan to try and measure hitter's plate discipline.

Generally when we think of disciplined batters, characteristics include high-OBPs, good BB%, and low K%. I just had one issue with this, some players receive more pitches in the strikezone than others, meaning that they will have more opportunities to get into walk and strikeout-heavy counts.

Obviously this logic has its flaws because first off, better hitters will receive less strikes. This is a pretty basic concept, but it is important to remember for this work I am doing here.

Getting back into the numbers I ran, I chose to pull from the sample of qualified hitters from 2002-2012, which gave me a total of 1,685 seasons observed. First, I divided total number of strikes over total number of pitches seen (pulled from Fangraphs). Next, I took that number and subtracted Zone% from it. The number that came up was effectively the difference between strikes thrown to the batter and actual strikes the batter ended up with.

I am going to refer to this as Disc% for the moment, but it is hardly definitive.

Posted below is a top-10 leaderboard for this stat, sorted from lowest to highest. Certainly some names in there that you may not expect, Freel and Counsell for me specifically.

The other thing that stands out from this chart is that once again, Barry Bonds broke baseball. The only player to post a negative Disc%, meaning that he saw more pitches in the zone that season than ended up strikes. That achievement may be one of his greatest.

Looking below, you can see a bottom 10 leaderboard. Josh Hamilton's 2012 comes in a distant last, by roughly 2% over the next closest one.

That list certainly looks like some undisciplined hitters, with Guerrero, Hamilton, Soriano, Sandoval, and Young being notorious free-swingers. I found it interesting that Ethier shows up this low on the list, as I always assumed he was a rather disciplined hitter.

The next logical step for me was to look at the relationship with BB%, because if a batter is disciplined, they will generally walk at a good clip (or so the logic goes). 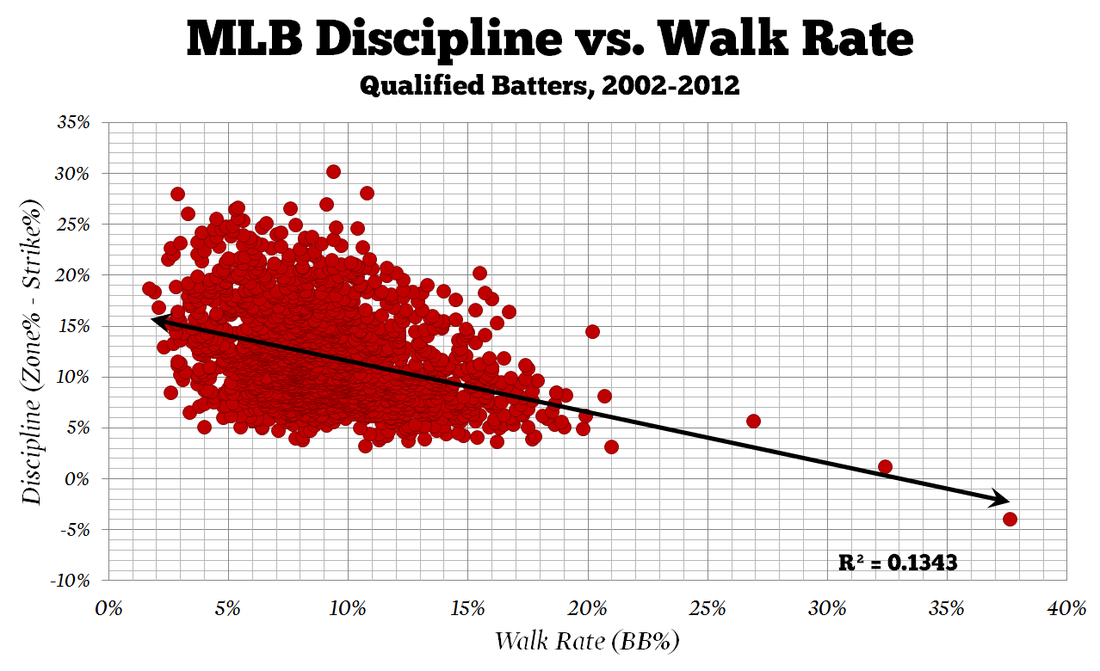 So what does all of this mean?

I would say that it is more a new way to look at the discipline of a hitter, but it probably is not anything too definitive or groundbreaking. It turned up some interesting names on both sides of the spectrum, but generally had guys near the top who you'd expect, and guys near the bottom that one would expect to be there as well.

What do you guys think?