A Brief History of Pitchers Hitting

The idea of pitchers as hitters is suddenly under attack and it raises many concerns about how much we should invest in pitcher's offensive WAR totals. Let's take a walk through the history of the game from the view of a pitcher inside the batter's box.

Share All sharing options for: A Brief History of Pitchers Hitting

There's been quite a bit of discussion around Beyond the Box Score lately with regard to pitcher's hitting, and it's made me realize that I am not as familiar with the area as I would like to be. So I decided to do a little research on the topic this morning as a sort of self-tutorial.

I've heard it alleged before that pitcher's hitting can viewed as a sort of "baseline" by which we can judge the growth of all other major league hitters' talent. This is assuming, of course, that pitchers as hitters haven't changed much, considering how little impact it has on the game, and how infrequently they hone their skills at the plate. Whether pitchers focus on their batting more or less these days may actually be a debate for historians, because all we can do is compare it to the league average.

According to Fangraphs, pitchers' wRC+ has been on a dramatic decline since the turn of the century. 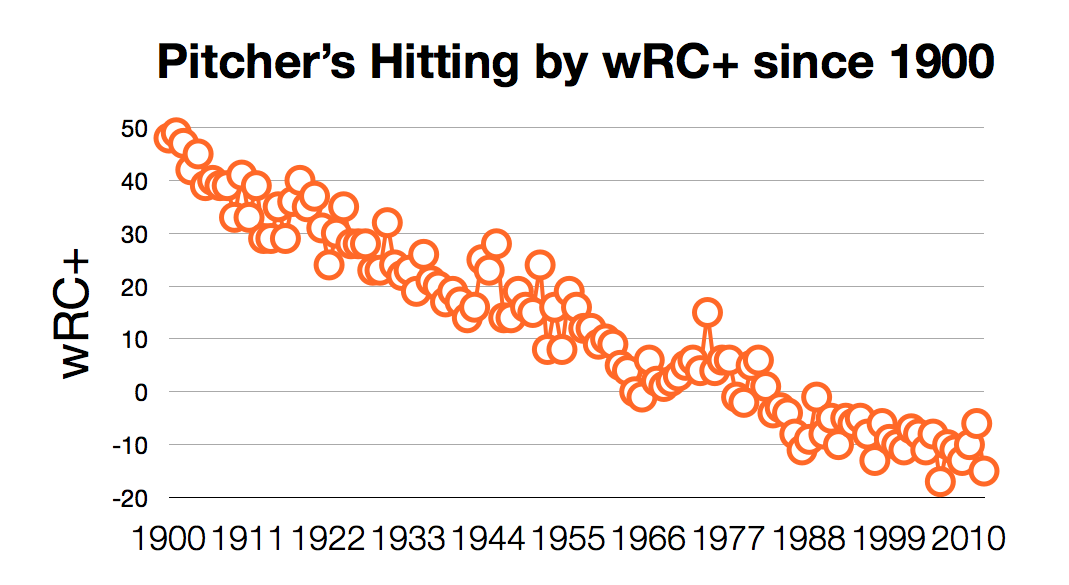 In other words, the gap between pitchers' hitting and the rest of the league has been growing exponentially. Mercifully, as starting pitchers have surrendered a significant portion of their innings over to relievers over time, the effects of this widening gap are tempered by the loss of pitcher's plate appearances.

Here's retrosheet's account of just how forgiving the introduction of the DH rule has been to major league baseball: 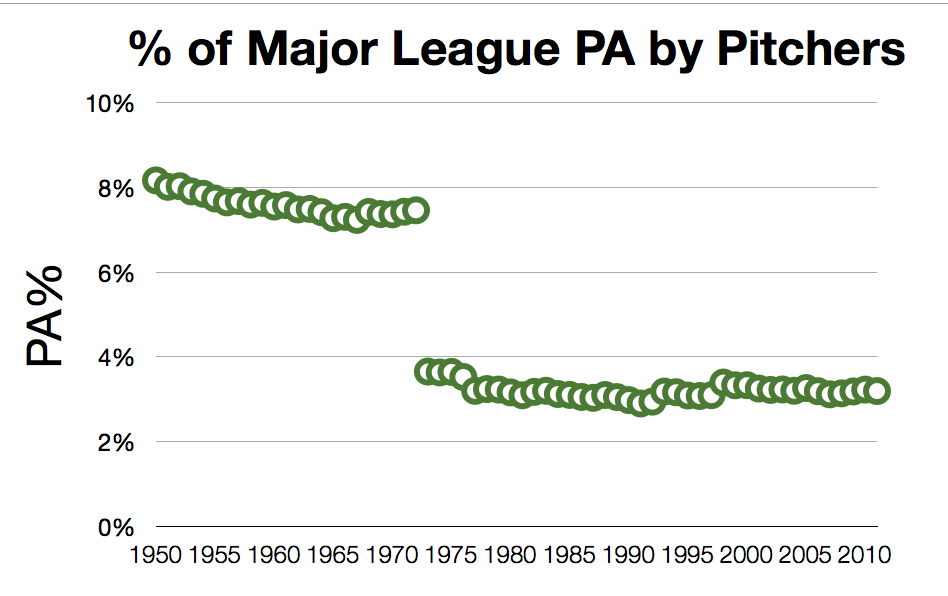 How good can it get?

But it's not all bad, is it? In fact, a great-hitting pitcher can be terribly exciting if only for the sheer rarity of the event. We've all seen games where a player like Carlos Zambrano doubles off the wall during a shutout, or Stephen Strasburg drives in the go-ahead to earn himself to a "W". But how much can even a decent-hitting pitcher contribute to his team in terms of runs and wins?

I turned to Baseball-Reference for that answer, looking for the best seasons for pitchers as determined by Batting Runs.

Best Hitting Seasons for Pitchers, since 1920

So we have some very impressive stories here. First off, at #1, Don Newcombe can lay claim to the best offensive season from a pitcher in the live ball era, one in which he amassed a gargantuan 2.4 WAR with his batting alone. This nearly doubles the total value he contributed to his team that season, as Newcombe was worth an additional 2.6 WAR from the mound in 1955. Traditionally, when we cite WAR totals we never bother to include their hitting. In Newcombe's case, we are gravely underestimating his contributions.

There are a few other notable names-- Walter Johnson, Wes Ferrell (twice) and Don Drysdale. But it's painfully obvious that the most recent season was over half a century ago in 1965. This has quite a bit to do with the lighter IP workloads (and therefore lower PA totals) that are expected of starting pitchers these days, but it's certainly not the whole story.

As for the best recent pitchers, you've probably already guessed them:

Best Hitting Seasons for Pitchers, since 2000

I'll admit I nearly forgot about Mike Leake's potency with the bat. His slashline of .333/.407/.354 from 2010 is really quite impressive and his 1.2 WAR ranks 33rd in the Live Ball era. His 2012 season wasn't half bad either (precisely at league-average at 100 wRC+) and he's already accumulated 2.5 offensive rWAR in just three seasons.

Micah Owings hasn't had a ton of success as a pitcher over the course of the last five years, but his batting numbers are rather impressive. Despite a 111 ERA- since 2007, his wRC+ is a solid 104. During the course of the 2012 season, Owings even attempted to transition to a "position player/pitcher" in the San Diego Padre's system at AAA. An injury sidelined that plan, but Owings' is likely to give it another go this season, provided he's awarded the opportunity. His 152 wRC+ from a pitcher during that 2007 season, ranks 3rd best since 1920 (min 50 PA).

For the younger members of the readership, Brooks Kieschnick's major league career is quite a rare story. After his prospects as an OF/1B began to fade, Kieschnick converted to an unprecedented PH/RP role with the Milwaukee Brewers for the 2003-2004 seasons. He amassed 144 Plate Appearances in that time and 95 relief innings.

How bad can it get?

These are wonderful stories, but I imagine it's more often severely bad than it is modestly good. Let's look at some of the less encouraging pitcher hitting seasons.

Worst Hitting Seasons for Pitchers, since 1920

All of these seasons occurred before 1980's, and owe an equal part of their damage to bad hitting as well as PA totals. Fangraphs, incidentally, has the top 5 worst wRC+ seasons from a pitcher occurring after 2000 (min 50 PA), so pitcher's offensive rates are in fact getting much worse, at least at the extremes, when compared to the rest of the league.

But the worst-case-scenario for pitchers hitting in a single-season still looks to be around -1 WAR. Check out some of these slashlines, if you got the guts:

Worst Hitting Seasons for Pitchers, since 2000

Beyond the Boxscore's Adam Darowski once looked at the greatest gains in career WAR pitchers had made through their offense (although Baseball-reference has since modified their WAR calculation), but I've composed a more modern list, with more names you may recognize, for better reference. (If you're like me, you sometimes need to juxtapose the memory/impression with the statistic, in order for it to properly register.)

Among all pitcher with at least 250 pitching appearances, having debuted after 1945:

Don Newcombe again, and surely everyone remembers the very un-pitcher-like skills of Mike Hampton at the plate from not so long ago. Gibson apparently wasn't afraid to dig in despite all the anxiety he caused from the other side of the batter-pitcher match-up, and Carlos Zambrano's offensive WAR totals justify the hype.

But where the issue of pitcher's hitting becomes of particular interest is a case like Tom Glavine at #5. When December of 2013 comes around, the Hall of Fame debate will be assuredly en fuego. With over 15 players with legitimate odds of being inducted, a player like Glavine will need every edge he can muster to get that 75% of the vote. Adding an additional 7.5 WAR to a player's career is effectively adding another MVP season to his legacy. It is not a trivial amount and could be all the difference between the Hall and Lofton-ville.

Of course some players, when they finally decide to hang 'em up, have to look back on their careers and deduct that figurative "MVP season" from their legacies based on impossibly, unforgivingly bad bat-handling:

I'm curious to hear back from everyone about this final point, though. With the positional adjustments for pitcher's offense weighted so heavily, just a handful of squeakers past the infielders can have dramatic cnsequences with regard to that player's WAR totals. But, at the same time, some pitchers clearly have demonstrated a legitimate ability to out-hit their peers and deserve credit for this contribution. The question is then, should we include pitcher's hitting when we cite their WAR totals, both for single-seasons and their careers? Vote your conscience.

Thanks to Baseball-Reference, Fangraphs, Retrosheet, and the Lahman database for the data.