The Cleveland Indians have a core of young, up-the-middle players that have led their offensive attack over the past two seasons. We examine swing rate characteristics of three of these players in an effort to understand each of their preferred levels.

Over the past two seasons, the Indians offense has rated as one of the most selective unit in the league. They have chased the fewest percentage of pitches outside the zone. They have swung in general at less pitches than nearly all other teams. Today I'd like to investigate the batting patience profile of shortstop Asdrubal Cabrera, catcher Carlos Santana and outfielder Michael Brantley.

Backstop Carlos Santana recovered from an ugly season-ending injury in his 2010 rookie campaign with two solid performances over the past two years. While his batting averages have left a little to be desired, his .239/.351/.457 and .252/.365/.420 lines have rated as better than twenty percent above league average offensively in each season.

In each of the past two years, a curious trend can be observed in the Z-Swing% of this Indians trio if examined on a monthly basis over the course of the season. Z-Swing% is simply the percentage of pitches faced within the strike zone that a hitter has attempted to hit. While breaking a season into calendar months could be considered forming arbitrary start and endpoints within a season, there are enough plate appearances in a month for many of the plate discipline statistics to stabilize, including swing rate. The monthly breakdown allows us to make use of splits that are already available. 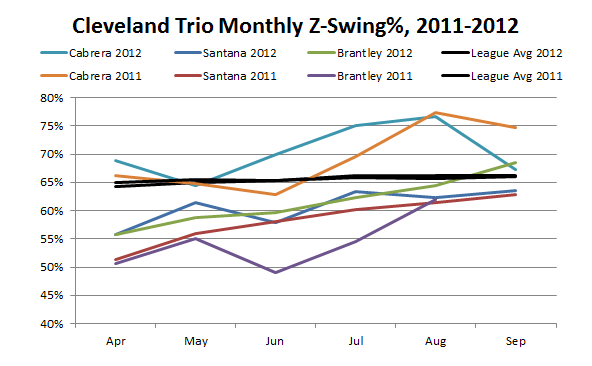 Note the non-zero vertical axis origin! This was done to get a closer look at the differences in Z-Swing% in the graph.

All three of these players have started off the past two seasons by taking pitches for strikes more often, and then increased their swing rate at pitches in the strike zone as the season progressed. While the league average Z-Swing% for qualified hitters has crept up roughly 0.3% per month between April and September, Cabrera, Santana and Brantley have seen their monthly rates rise at 1.9%, 1.7% and 2.2%, respectively, over the same period.

It is also apparent that Santana and Brantley have looked at more strikes than the league average, while Cabrera has tended to be more aggressive inside the zone. Given the range in Z-Swing% that each of these players has experienced, an interesting question to investigate is whether there is a preferred level for each hitter to operate at to achieve his best results offensively.

There is a striking pattern that is visible when we look month by month at Cabrera's offensive production, represented by wRC+, and his swing rates inside the strike zone. 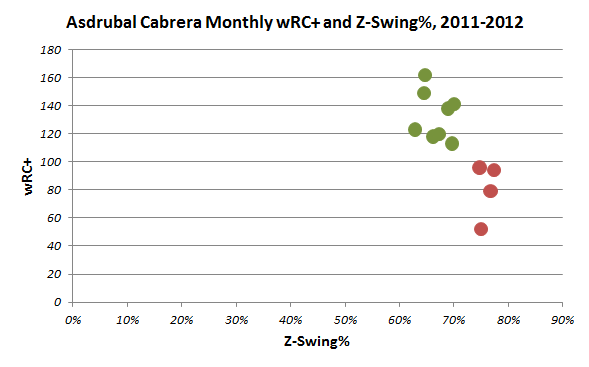 We can see that in his eight above average offensive months in the last two seasons, he swung at less than 70% of all pitches that were in the strike zone in each one. In his four below average offensive months over that same period, he swung at 75% or more of pitches in the zone. There are only 12 monthly data points to work with here, but the R-squared is 0.60, and the correlation is statistically significant.

His heightened aggression on pitches in the zone is exemplified by his drastic rise in swings on first pitches of plate appearances that are offered inside the strike zone, as seen below.

Now, swinging at the first pitch if it is a strike is not necessarily a bad thing. The data is telling us, however, that when Cabrera starts swinging too frequently at strikes, he is having less success. This leads us to believe that in his aggressive mode, he is making worse decisions when it comes to offering at strikes. To examine these pitches within the zone more closely, I looked at the heat maps available at Baseball Prospectus, in their collaboration with Brooks Baseball.

Every player is going to have areas of the strike zone where they do more damage than others. Some guys are low ball hitters, some like it out over the plate where they can extend their arms, etc. The heat maps break the strike zone into nine equal sub-zones, where it is possible to assess how well Cabrera performed in each sub-zone and how often he swung in each sub-zone.

To make matters slightly more complicated, Cabrera is of course a switch hitter, and thus his "hot" and "cold" sub-zones differ depending on which side of the plate he is standing. I'm also looking at the last two seasons, thus the areas of the strike zone where he excelled can have changed across years.

To summarize his performance, I looked at each side of the plate separately, and each season separately. I then looked at his seasonal True Average (Tav) in each of the nine sub-zones, and categorized them as "hot" if his Tav was above the league average .260 in a sub-zone, and "cold" otherwise. I then looked at the number of times his plate appearances ended with pitches in each sub-zone over his eight above average months, and repeated for his four sub-par months. I then combined the totals to produce the following summary:

In his highly productive months, Cabrera operated more inside the strike zone in sub-zones that were favorable to him as a hitter. It would appear that he was able to be more selective, and wait to get a pitch in an area of the strike zone that he prefers than in the months where he struggled. When his performance was below par, he was swinging more, and tending to attempt to hit pitches in areas of the strike zone less suited to him, contributing to the worse results.

It is also notable that in 2011, when he posted higher HR, ISO and SLG numbers, he had more hot sub-zones and thus hit a higher percentage of pitches in these zones than last season.

Santana sees a lot more pitches than Cabrera, and in fact more than most players in the league, ranking inside the top ten in pitches per plate appearance in each of the past two seasons. He draws a lot of walks with his plate discipline and approach, ranking fifth in the league of all qualified players across 2011-2012.

While the correlation is not as strong, it would appear that Santana suffers from the opposite problem as Cabrera in his less productive months. 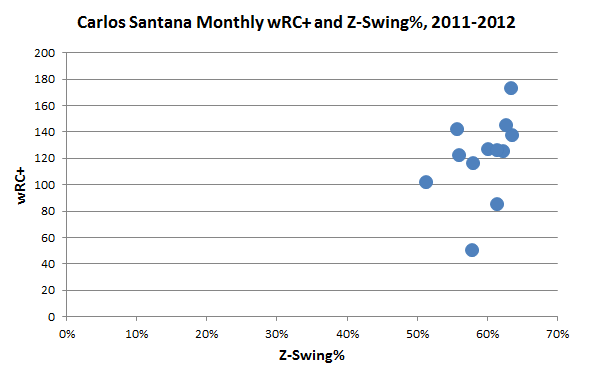 Brantley's case is different yet again, as his climbing Z-Swing% over the course of the seasons has not appeared to play any major part in his offensive results. He is much more of a contact hitter than his two teammates discussed above, posting single digit strikeout rates in each season, good enough for the fourth lowest K% of all qualified hitters in 2012. Given that he rarely walks, strikes out, or hits home runs, Brantley's success at the plate has largely hinged on his BABIP.

Hitters can thrive in the league with high swing rates and low swing rates. I suspect the key to success is knowing what part of the strike zone you like the ball in, and having the discipline to wait for pitches in these areas to hit. In Cabrera's case, this would appear to be mostly in the form of taking enough pitches. Sometimes the skill required would be having the ability to foul off pitches in the undesirable zone locations until a pitch comes into an area that you can better handle. In Santana's case, this may take the form of being ready and willing to swing at a hittable pitch earlier in the count when one is presented to him.

Given that Z-Swing% is not a metric with an obvious target, or "leader", it is reasonable to assume that the league average is at the level that it is for a reason. Albeit from different sides of the line, the fact that both Cabrera and Santana see better results when their Z-Swing% trends toward the league average makes some sense to me.

It will be interesting to observe their development or lack thereof in this department with the arrival of new bench boss Terry Francona. Francona is no stranger to fostering a patient hitting approach, as he watched his Red Sox team lead the league in walks and tie for the lowest swing rate in the majors over his eight year tenure in Boston. The Sox also tied for the second lowest Z-Swing% of any team over that stretch.

Cabrera, Santana, and to a lesser extent Brantley have developed into above average hitters at premium, up-the-middle positions, making them valuable commodities. If they are able to refine their hitting approach within the strike zone across an entire season, they could develop into something even more special for the Indians and their fans in the coming years.

Credit and thanks to Baseball Prospectus, Texas Leaguers and Fangraphs for data upon which this analysis was based.