Often speed is a tool that peaks at an earlier age than other baseball tools. We examine those players who broke the mold and hit their stolen base stride in their 30s.

Share All sharing options for: Stolen Bases: Players that Peaked in Later Years

Recently, R.J. Anderson at Baseball Prospectus wrote an engaging article detailing the stolen base prowess of one Coco Crisp. Anderson demonstrated the base running intelligence of Crisp by examining each of his 2012 stolen bases and noting the relatively high percentage of occasions where Crisp got his jump even before the pitcher started his delivery. At the age of 32, Crisp has honed his base stealing instincts to the point where he is often able to notice patterns in the pitcher's behavior and feel comfortable enough to start running based on his calculated timing.

In looking at Crisp's yearly stolen base totals, I noticed that his career high came in 2011, when he swiped 49 bases at the age of 31. With pure speed being the type of tool that would tend to peak at a younger age, I wondered if reaching a stolen base peak in the 30s was something that had occurred much in baseball history.

I started my search after World War II in 1945, up to present day. I was searching for those players who achieved their highest career stolen base totals at the most advanced ages. To make the accomplishment more meaningful, I required that the peak total exceeded 20 stolen bases in the season in question, which I consider to be a number indicative of a player who posed an actual stolen base threat at the advanced age.

The players who peaked in this category at the oldest ages over this time period are shown in the table below.

Former Reds and Yankees All-Star Paul O'Neill and the great Charlie Hustle himself, Pete Rose, top the leaderboard with career high stolen base levels at the astonishing age of 38. While for O'Neill he peaked in his final major league season, Rose continued to play seven more seasons, finally retiring at age 45.

Hall of Famer Lou Brock, who sits second in all-time stolen bases, amassed an unfathomable 118 steals at age 35 in 1974. In stark contrast, all-time leader Rickey Henderson, who also has the highest single season total since 1945 with 130 stolen bases, hit his stolen base peak at the age of 23. Fellow speedster Vince Coleman's career high 110 single season steals, ranking third during this period, was also accomplished at age 23. Brock's off-the-charts total at age 35 more than doubles the number of steals anyone else in the table managed at their best.

Moving down the list, we see a number of middle infielders, including Hall of Fame shortstops Ozzie Smith and Pee Wee Reese. Smith tallied his career high mark at the height of the stolen base across the league in the late 80s. 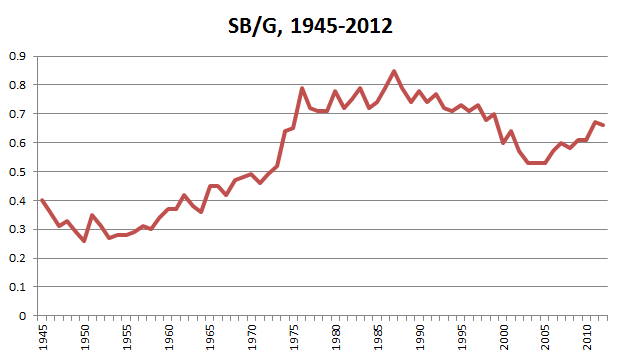 So Coco Crisp did not crack the leaderboard by hitting a career high in steals in his age 31 season. If we look solely at active players, we can see where he ranks among his current peers.

I suppose I should not have been surprised to find Juan Pierre on a list like this, although his career high in 2010 is the only season of his last five where he topped 40 stolen bases. Derek Jeter also ensured that he made the leaderboard, as he pretty much makes most leaderboards, that guy.

Crisp appears on the list, reaching his peak one year earlier than the active leaders. New Red Sox outfielder Shane Victorino and everyone's favorite super-utility man Willie Bloomquist join him on the list.

Rounding out the list are Bobby Abreu, who has been in the league since the Brewers were in the American League, along with Brewers rookie Norichika Aoki, Phillies star Chase Utley, Nationals outfielder Jayson Werth and White Sox shortstop Alexei Ramirez, who managed a stolen base personal record in an otherwise dreadful year offensively in 2012.

Chances are most of these players adapted as Crisp has learned to do, to rely more on better reads and instincts than improved foot speed in the later stages of their careers.

Credit and thanks to Fangraphs and Baseball Reference for data upon which this analysis was based.