WAR is a fantastic tool by which we measure a player's overall value with a baseline set at "replacement-level." What happens when we raise that baseline to All-Star or even MVP level? Which players benefit and which players suffer? And what can it tell us about the type of career a player had?

Share All sharing options for: Using Variations of WAR to Measure Career Shapes

I used to try my best to ignore Hall of Fame season. Every year it seems like the same vague, contrived arguments about 'character' and 'intestinal fortitude' based on cherry-picked stats over cherry-picked lengths of time. When discussing Hall of Fame worthiness, it's as though we're all playing a game where everyone was given a different rulebook. Some of us are playing poker, some are playing go-fish, some Uno, some Skip-bo, and some lick-em and stick-em.

This year is different for me, however. This year, I've found myself with a fresh, revitalized attitude towards the Hall of Fame debate and it has everything to do with Adam Darowski's wonderful new Hall of Stats website. At HoS, Adam has devised a "Hall Rating" for each individual player using Baseball-Reference's WAR, taking into consideration peak value, longevity, position, era, and a whole host of other considerations with extremely pleasing results.

Over the course of the last few weeks, I've spent quite a bit of time scrolling through HoS's pages upon pages of ballplayers in MLB hstory. In that time I've realized two things about my general attitude towards a Hall of Fame.

2. I certainly value 'peak' over longevity.

3. There are many sizes of 'peaks'

It's that second and third realization that have inspired this post today.

The predecessor to Adam's Hall Rating formula was something he called wWAR, and it incorporated two variations of WAR designed to measure peak value, rather than crediting players with long careers of average production. These two measures are Sean "Rally" Smith's "Wins Above Excellence" (WAE), which measures all Wins above 3.0 in each 3+ WAR season (and disregards any seasons below that threshold), and one of Adam's own designs dubbed "Wins Above MVP" (WAM), which measures all WAR above six. I prefer to add yet another facet to this concept, creating a WA3/WA5/WA7 'slashline'-- one that rates players by their Wins Above 3, Wins Above 5, and Wins above 7 WAR respectively.

This way, we're eliminating all of a player's garbage seasons that may be contributing to his WAR totals, and instead focusing on his 'peak' by three different definitions. If you value simple longevity of a career more than anything else, this may not be the post for you.

I was curious, then, what if we only judged players by these methods? In other words, what if we threw out all seasons where a player posted pedestrian numbers (compiling seasons) and judged them only by the strength and frequency of their their All-Star and MVP-caliber seasons? Which players would suffer the most?

For instance, there have been 33 starting pitchers in baseball history to log over 60 WAR over the course their career. Two of them, Don Sutton and Ted Lyons, never posted a season above 7 WAR.

In fact Lyons, Sutton, and even Atlanta Brave legend John Smoltz spent very little time in what Baseball-Reference refers to as "All-Star" territory, with under 3 "WA5" for each of their careers. Compare that to a Kevin Brown, who achieved just as much WAR in his career, but spent much more time at the All-Star level with an impressive WA5 over 10.

We also see that several other highly-revered pitching greats, like Nolan Ryan and Tom Glavine, rarely ever reached the +7 WAR heights. Ryan's career in particular was very much lacking in 'peak' value for a first-ballot Hall of Famer. If you ignore all his below-average seasons (WAR < 2), his career very much resembles that of a Mike Mussina-light: 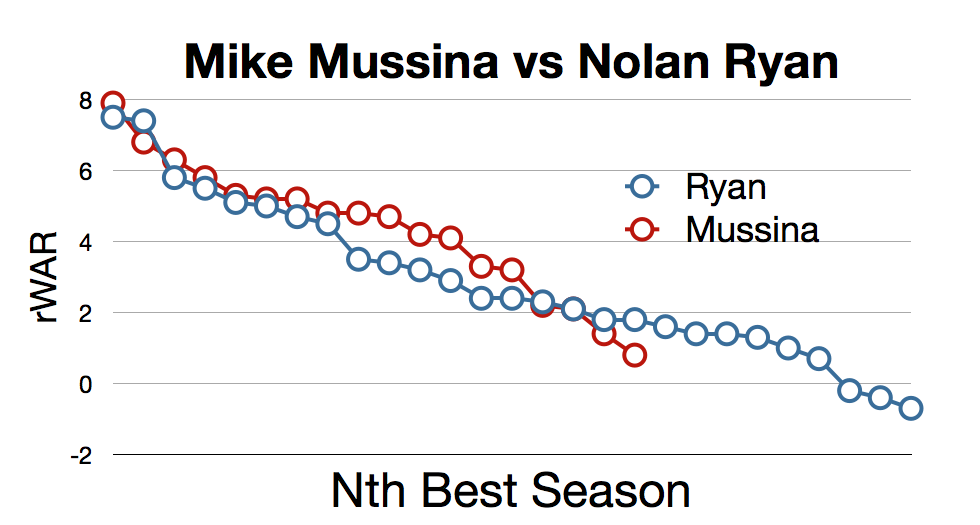 This graph provides an excellent way of visualizing the similarities and differences between the two careers, but by looking at both players' WA3/WA5/WA7 slashline, you can see the relationship just as easily:

Both players have a WA7 of .9, which is represented by their two best seasons on the far left in the graph. Mussina then edges out Ryan in WA5, but runs away from Ryan in the WA3 comparison (29.6 to 22.6). Yet, with similar WAR numbers, we have to assume Ryan makes up all that ground with sub-average seasons (all 11 of them).

But perhaps you feel 7 WAR is too high of a standard by which to judge a player? For Position Players, then, let's instead look at all careers with at least 60 WAR sorted by the lowest WA5.

Willie Randolph spent 18 seasons racking up 63 WAR with only having 3 seasons of +5 WAR performance. He is essentially the quintessential example of a very good player with an impressive, long career, whose greatness was extremely fleeting. A modern day example might be Johnny Damon, whose 50 WAR puts him ahead of Hall of Famers like George Sisler, yet he still only managed two seasons above 5 WAR with Kansas City and a WA5 of just 1.1 in 18 seasons.

We also find that recent retiree Manny Ramirez has basically the same Career as first-ballot Hall of Famer Eddie Murray. Both had 0 WA7, an eerily similar WA5, and Manny with the slightest edge in WA3 22.3 over 19.2). 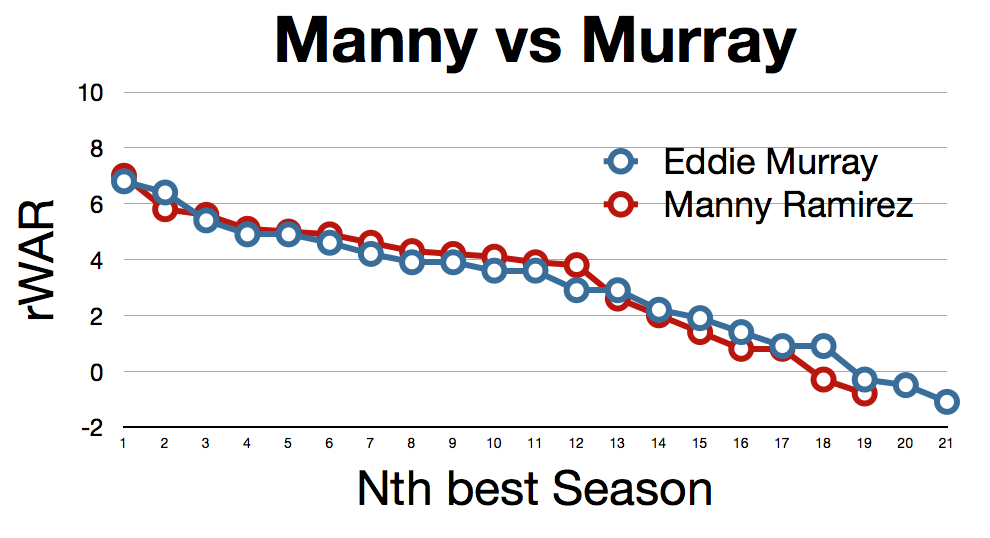 I should note, also, that with Catchers receiving less playing time over the course of the season than other position players, Adam has devised a simple adjustment for their WAM, relaxing the Wins threshold. I haven't added that adjustment to these tables, so Catchers like Ivan Rodriguez and Carlton Fisk at #9 and #10 will certainly be underrated by this system in it's raw format.

I've compiled WA3/WA5/WA7 totals for the top 250 pitchers and 250 hitters in baseball history. Feel free to download if you'd like to play along at home:

Much in the same way that a hitter's AVG/OBP/SLG slashline will tell you the type of hitter he is in addition to his overall performance, I believe a WA3/WA5/WA7 juxtaposition can help us visualize the type of career a player has had in addition to his overall WAR value. We not only can see the size and scope of a player's career, but also it's shape. But what do you think?

All data courtesy of Baseball-Reference. Special thanks to Hall of Stats and Hall of wWAR for inspiration.